Travel blog: Shooting for the stars (and stripes) in Puebla 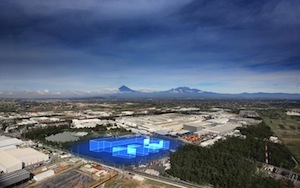 If NASA, in this era of budget cuts, should need to find alternative premises, I know a little place down in Mexico that might suit. Not that its current occupant would be eager to vacate, having only started operations there last year. I’m talking about VW and its new bodyshop for the seventh-generation Golf, at one of the OEM’s largest assembly plants worldwide – Puebla.

I’ve been to numerous bodyshops, including those of high-end manufacturers, and I have to say this one impressed me. It’s not that the technology was revolutionary – it’s spot-welding – but that the facility was big, bright, clean and stuffed full of robots. The overall impression was of a high-functioning bodyshop operating in accordance with the latest standards of modern manufacturing. The facility cost $700m and was outfitted for the revamped design of the new Golf: a lighter-weight steel body on VW’s Modular Transverse Matrix (MQB platform).

Like the rest of Puebla’s output – second-generation Beetles and sixth-generation Jettas – the majority of new Golfs are heading to the US and Canada. The plant made 475,000 vehicles last year and is currently turning out 550 Golfs per day (from an installed capacity of 700). Puebla is one of VW’s largest exporters, and during my visit yesterday Thomas Karig, VP of corporate affairs, told me the proportion which leaves Mexico is around 85%, with half going north of the border, some to South America, Europe and Asia – and only 15% staying in the country where they were made.

This is by no means surprising, as VW and its fellow OEMs have used Mexico as a launchpad for exports to the nearby US, and other markets in the developed world, for the past few decades. Puebla was established in the 1960s and has been exporting to the US since the late ‘80s. Indeed, Mexico has so many free-trade agreements that Karig believes no other country in the world offers the same opportunities. Costs are low, convenience is high.

In Detroit last week, I actually didn’t notice many compact VWs scuttling around the streets – then again, I may have been distracted by the big bumpers and shiny wheels of the SUVs and pick-ups, plus the gloriously old-school Cadillacs. But I can vouch for the fact that what’s made in Mexico mostly isn’t staying in Mexico. The vehicles here are almost universally beaten and battered: ugly brown things from the 70s, rusting Beetles and Combis, sporty types with gashes down the sides, and vans with the panels dropping off (and, in one case, stickers of the Virgin Mary plastered over the brake lights; useful in emergencies). The smattering of US vehicles are notable for their gargantuan proportions.

Since I find it hard to imagine any great love affair between Americans and the mini Golf (a bestseller in Europe – but so what?), it’s a lot easier for me to see where VW is going with its latest investment at Puebla. A cool $1 billion, announced in March this year, is being spent on a new bodyshop for a three-row SUV, the Tiguan (will the soccer moms like it?). Construction is already underway, and Karig told me the work will be completed by the middle of next year, ahead of a production launch in early 2017. The long-wheelbase Tiguan, which Karig admitted will be “especially important for the US market”, is part of a double-whammy, as a larger SUV will be made at the OEM’s Chattanooga plant in Tennessee.

I asked Karig if this new vehicle was the start of a trend of diversifying away from the Golf-class cars Puebla has traditionally produced. His answer was: “Yes and no”. The SUV might look different, but like the rest of the line-up it will be made on the MQB platform, enabling VW to offer ostensibly distinct vehicles from a standard production process – supreme manufacturing flexibility.

What next, starships on the MQB? Watch this space…