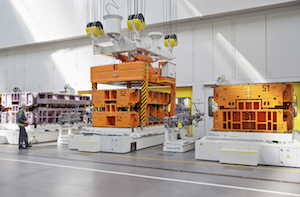 I got lost in Mladá Boleslav. Actually, there are worse places to wander than this northern Czech city; the crumbling old buildings are characterful, the Bohemian castle is picturesque and the mountain air is, well, a breath of fresh air to a visitor from London still trailing noxious fumes. But I was in town to see Skoda’s shiny new press line and in a rush to get to the factory.

Luckily, the two locals I pestered for assistance (alright, half a dozen) were able to point me in the right direction – because everyone in Mladá Boleslav knows where Skoda is. The plant has been the main industry here since cars started giving horses a run for their money in the early 20th century and even my hotel listed it amongst the stately piles as a place of interest, noting the large proportion of the population that the vehicle-maker still employs. Skoda is the city and the city is Skoda, which is why I’m calling it Skodaville. That, and the fact that I can’t pronounce Mladá Boleslav.

But time has not stood still at Skoda’s 112-year-old factory and in recent years it has pioneered new press shop technology on behalf of the Volkswagen Group. In 2012, the plant installed the parent company’s first PXL servo-mechanical press and in January this year it inaugurated PXL II – third-generation technology that Skoda has hailed as fully aluminium-capable. It was the launch of this second press which last month led to my crash course in the local lingo for “left”, “right”, “straight ahead” and “you’ve been heading in totally the wrong direction”.

Arriving at the plant with my new vocabulary, I was treated to a tour of this immense new line in its specially constructed hall, which covers 11,600 sq.m and, at 45 metres across, is the widest at Skoda. The 190 tons of machinery cost €46.3m ($49.0m) and the overall expenditure for the project reached €86.4m, but the investment looks to be a good one. This Schuler press can hit 18 strokes per minute and produce 23,000 parts per day, while cutting energy consumption by 15% compared with conventional presses (also being protected from temporary power outages by its recuperation system).

One reason for the high capacity of the press is its beautifully choreographed “cascade” changeover, in which the dies and associated tooling are manoeuvred automatically and simultaneously. The entire process takes just four minutes (or, much less time than it takes a non-Czech speaker to stop six Mladá Boleslavians and obtain hand signals to the plant). Since previous generations of presses required up to 45 minutes, this helps to explain why PXL II has replaced two older lines. Indeed, Skoda’s head of press shops, Marek Karaffa, says the greater productivity of PXL II may even equate to three older presses.

This has wider ramifications than the output of the press shop or even the plant, for the press operations here are the beating heart of Skoda’s entire production network, including facilities abroad. PXL II itself was set up to support the Kvasiny vehicle factory, which does not press its own parts, and despite only starting full production in March it has already made an impact, helping to boost Skoda’s daily output in the Czech Republic from 2,900 to 3,300 vehicles per day and raising the annual capacity by 90,000 units.

As for the much-trumpeted aluminium capability, this is not currently in use because so far the press has been handling steel like its predecessors. But Karaffa suggests that Skoda is on a mission to progress in aluminium: “We are just waiting for the right decision at the right moment”. Since Kvasiny is the main recipient of PXL II parts and also the focus of Skoda’s new SUV campaign, perhaps a new model of this type will be the trigger. However and whenever it happens, the recent changes in Skodaville will ensure that the OEM is better prepared than me to get where it wants to go.