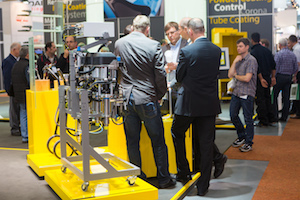 It’s that time of year when industrial coatings companies of various hues briefly coagulate to show off shiny new ideas, mix with others of their kind and enjoy the general swirl of an international trade show. PaintExpo this week has drawn 501 exhibitors, including 158 from 26 countries outside Germany, and offered attendees a look at the latest innovations across the paints and coatings spectrum.

Speaking at the press conference on the opening day, Fraunhofer Institute’s head of department for Coating Systems and Painting Technology, Michael Hilt, said that the general business environment “has not changed a lot” over the past few years, although “fashionable notions” have emerged. In the longer term, he explained, costs will remain a top priority but resource and energy efficiency will become increasingly important as the global population grows, demand for coatings rises and raw materials are depleted. In particular, emerging markets such as India will have to “get their act together” before their intensifying industrial output leaves a blot on the landscape.

Lest that sound a bit bleak, Hilt then painted an attractive vision of the future in which manufacturing processes become optimised to the extent of eliminating waste completely; all products will be recycled into the biological or industrial cycle. Hilt gave no hint of a timescale for the creation of such an idyll, but seemed convinced that “we have a bright future ahead of us” (presumably orange).

Noting, indeed, that predictions about the future are “hazardous” (unlike the paints and coatings?), Hilt suggested that other developments will include: more automation in production; smaller, smarter factories with streamlined processes; the “ultra-late” personalisation of vehicles; the wider application of overspray-free painting; and other technological innovations, such as multi-functional, intelligent coatings inspired by nature (chameleons, of course).

Adding another layer to Hilt’s themes, Jens Pudewills of the German Research Association for Surface Treatment said that further development trends include paints and coatings which are self-cleaning, self-healing and deadly to germs (but not Germans). Such products already exist, but the trick will be to blend these properties together; currently, the antimicrobial ones refuse to clean up after themselves. Moving away from the chameleon cliché, Pudewills said that shark biology is also feeding into coatings development, with the special structure of their skin being used to refine airflow characteristics.

“The best way to predict the future is to invent it,” stated Hilt in his presentation, quoting the computer scientist Alan Kay. Judging by the intriguing ideas covered during the conference, so far we have only scratched the surface of what painting and coating technology can achieve. Long may shows such as PaintExpo bring colleagues together in their efforts to solidify this deep potential.