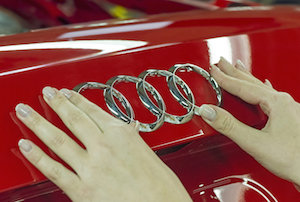 The picturesque south-central state of Puebla bears little resemblance to J.R.R. Tolkien's Mordor of Middle-earth, other than the active volcano that occasionally breathes out a light sprinkling of ash; in fact, the first day of my nationwide tour of automotive facilities brings me to a bright, open plain circled by blue mountains. But something is definitely stirring in Puebla.

Audi is putting the finishing touches to a $1 billion plant with an annual capacity of 150,000 units which, from the end of next month, will start producing Q5 SUV crossovers for all markets except China (where local production is already established). This is big news. Although sister company Volkswagen has had a manufacturing presence in Puebla for over half a century, this is the first Audi factory in Mexico – and, indeed, North America. Moreover, although recent years have seen hordes of automotive companies pouring into Mexico – seeking access to the lucrative US market, low-cost labour and plentiful free-trade agreements – Audi is the first premium OEM to embark on this quest.

It's easy to see why the Mexican authorities (both federal and state) are happy for Audi to lord it in Puebla. The region is already benefitting immensely from the OEM's decision to make its way here, with new infrastructure, businesses, homes and other facilities springing up nearby. A model city is being built next to the plant which will eventually house 120,000 people, with the first phase due for completion in just two years. Automotive suppliers, meanwhile, are constructing no fewer than 64 of their own plants to support Audi. Although it will share some suppliers with VW, the Audi factory has attracted 180 new companies and the Q5 will be built with 65% local content – five points above what is required by law. Around 20% of the output is expected to go the US, already the most successful market for this model, which fits into the increasingly popular SUV/crossover segment.

The little folk, too, have found gold. At the plant, I spoke to Audi's CEO in Mexico, Alfons Dintner, who told me that, once Puebla was chosen as its destination, the first actions Audi took were to establish a training centre – at 20,000 sq.m, its largest outside Europe – and to work with local educational institutions on developing training programmes. Since these efforts began three years ago, 350 people from various states have completed their apprenticeships (some initially at VW). The company also sent 750 specialists, and their families, for training in Germany.

In total, nearly a quarter of a million people applied to work for Audi in Puebla. While the OEM itself can employ only a limited number, currently 2,500 and targeting 4,200 by the end of the year, anyone who is certified by Audi can immediately be considered for acceptance by its suppliers. The training centre can also be used by suppliers to run their own courses.

For people are the story in Puebla. The new plant will use the Audi Production System which is in operation worldwide, meaning that the technology is sophisticated rather than especially innovative. By focusing on developing the strength of its 'company' in the Tolkien sense, that is to say its band of men (and women, perhaps a few dwarves) from the very first step of this journey, and guiding them in its philosophy of 'Passion' and 'Perfection', Audi has set itself up for a successful adventure in Mexico.

Moreover, since the factories of Infiniti/Mercedes in Aguascalientes and BMW in San Luis Potosí are not due to launch production until 2017/2018 and 2019 respectively, Audi has stolen a march on its premium rivals. The company looks to be building the right vehicle, at the right time, in the right place and with the right people; four things, and four rings, coming together at once. So, will it end in triumph? Quite probably – but it may be a long-running saga.