Travel blog: Getting hands on in Japan 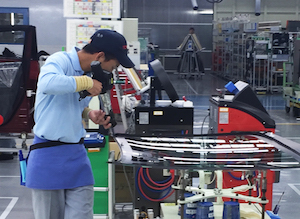 Are traffic lights in public toilets strictly necessary? I would suggest they are a little redundant when the possession of at least one functioning eye can alert you to an available cubicle just as easily. Japan, however, is a nation so fussy about functionality that it takes automation to extremes, as I discovered during my research trip for our upcoming Asia-Pacific supplement. I laughed in surprise the first time a taxi door swung shut by itself; I was delighted, in my primitive, European way, by the switch that let me draw the curtains without getting up from the bed; and I was morbidly intrigued, I'll admit, by the 'turbo wash' function on my own personal throne. But how much automation is truly ideal?

My first site visit was to Toyota, which knows the value of human labour despite routinely wiping the floor with other OEMs when it comes to volumes. In the former LFA Works at Motomachi Plant, Aichi, the Mirai fuel-cell vehicle is continuing the tradition of careful manual assembly left behind by its supercar predecessors. Essentially all tasks are done by hand, including the application of windscreen adhesive, which the worker must extrude at the fabulously precise rate of 6.5cm per second. In the absence of a conveyor, the cars are even pushed from one station to another (here, perhaps, the workers would be glad if automation relieved them of the strain).

The manual assembly is largely down to the low volumes required, currently just three per day. But according to project manager Akifumi Karasawa, the Mirai facility is a useful place for festering (sorry, fostering) human development. There are 13 workstations and 13 team members, who are all trained in the production process from top to bottom to create a multi-skilled workforce. After gaining experience on the Mirai, personnel usually end up somewhere else in the system: other Motomachi facilities, another plant in Japan, or overseas. Karasawa is in favour of this emphasis on manual skills, saying that unless people learn with their hands, they will not properly digest the manufacturing know-how they are taught. “We are making a person, not just a car,” he told me.

Meanwhile, over in Tochigi, Nissan indulges in manual labour for certain aspects of its Infiniti production, in the paintshop for underbody sealing but mostly in assembly. Ahead of the Q60 production launch in August last year, the company shaped 216 personnel into what it calls takumi. These are no bog-standard line workers but selected, highly skilled craftsmen operating under the guidance of six meister takumi (master craftsmen). During my visit to Tochigi, plant manager Takuya Nakamura informed me that it can take up to 20 years to achieve the exalted status of meister takumi, showing that there is a place for old-school patience even in the modern automotive industry – at least in the premium segment.

It is important not to conflate low automation with low technology. As well as pushing to enhance the skills of its personnel, Nissan introduced new equipment for deep-body stamping plus tooling for the Q60's resin boot lid, a new paint booth and enhanced inspection systems in assembly. The operation is a mixture of traditional and cutting-edge capabilities, because optimal production is about elevating both humans and technology to their greatest extent – and deciding where each might best be applied.

As for the handmade Mirai, this car is at the forefront of fuel-cell vehicle development which may challenge electric cars as the alternative mobility of the future. Karasawa says the former LFA Works could squeeze out 50 units per day using only human labour but that demand for 100 would make the use of robots cost-effective, at which point mass-production expert Toyota would surely introduce even more automation than can be found on a Tokyo toilet. I'd say that, in an automation-mad nation, carmakers are finding the right balance.