Travel blog: Back to the future 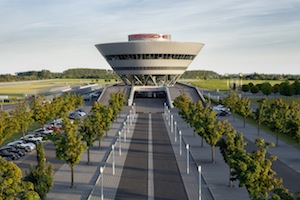 Leipzig twice in as many weeks. What has lured me to this spot of Saxony so soon after my trip to see BMW’s revolutionary production of the all-electric, carbon fibre i3? While many who know me may disagree, it wasn’t the Leipziger lerchen, tempting though they may be.

From speciality cuisine to speciality car manufacturing: Porsche has just opened its new production facilities for the Macan SUV, after a two-year construction period and an extra-large helping of euros (nearly half a billion). The 35,000 sq.m bodyshop and 60,000 sq.m paintshop have joined existing facilities for assembly of the Cayenne and Panamera, and will enable Porsche to make the Macan entirely at Leipzig (apart from pressed parts, for which it will use external suppliers; plus the drivetrains).

But whereas BMW has pioneered a whole new method of manufacturing which may represent the future of automotive production (using carbon fibre parts, adhesives instead of welding, a vastly diminished paintshop and 100% renewable energy), with the new Macan, Porsche is focusing on doing pretty much what it always has: putting an immense amount of effort into crafting the gleaming works of art its customers demand. It seems rather appropriate that many visitors to the interestingly shaped on-site customer service centre remark on its resemblance to a huge diamond (at least 20 carats).

Personally, though, I’m of the opinion that it looks more like an alien spaceship balanced delicately on Leipzig soil (access to most earthlings denied). Indeed, if we all start driving i3s in line with BMW’s hopes and dreams, I fully expect the Porsche building to blast off in disgust.

Although Porsche has demonstrably invested in greener production for the Macan (a biomass plant to generate 80% of the heat required for the paintshop and a photovoltaic system on the roof of the bodyshop), it is final product quality that is the main focus. And regardless of the projected shift towards more sustainable forms of mobility, there surely always will be a niche for premium vehicles.

On a tour of the bodyshop with its leader, Norbert Wagner, I was able to witness for myself the extraordinary attention to detail being applied to Macan production, including the brightly lit glass box where workers wearing white gloves feel over the car bodies for defects – “magic hands”, they call it. In the paintshop, too, the bodies are wiped clean manually before the robots set to work.

And so, while the nearby BMW plant performs miracles with its manufacturing methods, Porsche Leipzig is combining state-of-the-art facilities with human skill to make a masterpiece of the Macan. It may not be the future, but who wouldn’t want this kind of craftsmanship to have a future?