Travel blog: A tornado in Toledo 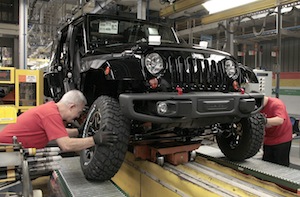 What do Toledo and Leipzig have in common? No, it’s not that they both have an ‘e’ (or an 'l') in their name. Nor is it that they’re both European; I’m talking about Toledo in tornado-riven Ohio, not the Spanish city famed for its steel-making since before the birth of Christ. The connection is a lot more cutting-edge than that: both boast a fantastically automated bodyshop, Toledo’s operated by FCA and Leipzig’s by BMW.

When I visited BMW Leipzig last year, I felt that the futuristically robotised production was synonymous with the pioneering nature of the carbon-fibre, electric vehicles being made there (the i3, and later the i8). But having toured FCA Toledo North yesterday, I can see that in certain cases high-volume manufacturing is not too far behind.

This super modern bodyshop came courtesy of a $500m investment announced in 2011, which also brought upgrades in paint and assembly, plus a new, 26,000 sq.ft metrology centre. Now there is a three-level flex decking system, which uses pallets to deliver components in stages – the only example at a Chrysler plant, and the fourth at Fiat. In fact, the flex decking, laser brazing, BRIC and Open Gate Framer all trace their origins to Fiat, or at least the merged company (the last two), which shows the extent of the technology transfer Chrysler has enjoyed from its European spouse.

It’s not all about the robots, though: it's a combination of man and machine. Plant manager Chuck Padden emphasised to me the importance of “unlocking” human potential, explaining that Toledo’s employees generated 80,000 efficiency ideas last year alone, leading to cost savings of $5-6m. Examples include several kitting systems in assembly, for ultra-fast installation of parts such as grille inserts and front suspensions. Here too, one can see signs of Fiat and its World Class Manufacturing strategy.

This whirlwind of production is powering Padden’s ambition “to make Toledo the premiere manufacturing organisation in the world”. In 2014, the plant’s output of 511,106 units was narrowly beaten by Nissan Smyrna in the NAFTA production league table, and Padden is determined to overhaul its rival by hitting a target of 531,000 this year (Nissan, are you reading this?).

In light of this hefty production, and remembering the wind turbines at Leipzig which power BMWi manufacture, one of my final questions to Padden was about sustainability and whether plans were afoot to introduce alternative sources of power. “Not right now” was the forthright answer; costs come first.

Well, maybe high-volume production does have some way to go in chasing the futuristic ideal.