Toyota: The titan marches on

While production is set to decrease in Japan, the OEM is expanding its worldwide footprint 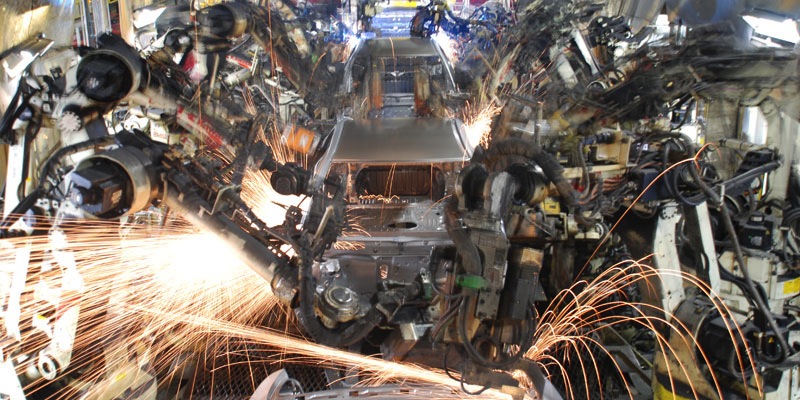 On December 5, 2013, Toyota passed a notable production landmark when the total number of vehicles made in Japan since the company’s inception passed 150 million, 78 years and five months since the first model, a G1 truck, emerged from the Toyoda Automatic Loom Works’ automotive subsidiary. By the end of 2013, the company’s global cumulative production total had exceeded 210 million units, out of which vehicles bearing the Corolla names totalled more than 25 million, or just over 12%.

In recent years, Toyota has rarely been out of the news owing to a series of high-profile recalls. Although many of these have concerned safety-critical parts such as airbags, for which there was a major recall in 2013, the company’s reputation appears intact. In 2013, Toyota retained the number one spot in the global rankings, selling 9.98 million vehicles against GM’s 9.71 million and VW’s 9.7 million units. It is notable, too, that in 2013 the company sold more than 1 million hybrid vehicles, the second time it has broken this barrier (1.28 million last year and 1.22 million in 2012).

Despite the uncertain economic situation worldwide, Toyota has set its sights on further growth, planning to breach the 10 million barrier in 2014 with a group target of just over 10.4 million units. Moreover, the company wants its Daihatsu subsidiary to break the 1 million mark and for the Toyota brand to produce more than 9 million, with approximately two-thirds of Toyota brand production made outside Japan. [sam_ad id=17 codes='true']

Turning less Japanese
One of the reasons Toyota expects only just over 3 million of its vehicles to be made in Japan in 2014 is the anticipated reduced domestic production from April onwards, due to an increase in domestic sales tax from 5% to 8%. The company, together with many local economists, predicts a surge in consumer expenditure in Japan until March 31 and then what it hopes will be a temporary decline form April onwards. Toyota’s domestic daily production from April is currently planned to be just over 12,000 units, a decline of 15% from 2013.

Across Asia, one of the key trends at Toyota in recent years has been the widening geography of production. This is exemplified by the opening of a second Toyota plant in Karawang in Indonesia in early 2013. Plant 2, which has an initial annual capacity of around 70,000 units, produces the Etios Valco, a compact hatchback which was apparently developed specifically for this market. Capacity will be raised to 120,000 per annum during 2014, alongside a slightly higher capacity for Plant 1, which makes the Kijang minivan and Fortuner SUV.

In addition to these two plants, Toyota also has some of its small Agya cars made by Daihatsu’s Indonesian operation, which supplies both Indonesia and other Asian markets, including the Philippines.

Like most vehicle companies, Toyota is increasingly active in China. The company now has three vehicle plants, two of which are joint ventures with FAW. At once of these, in Sichuan, Toyota is widening its production line-up of Prado SUVs; having produced the 4.0-litre version for some time, it will add the 2.7-litre from March 2015, raising capacity from 30,000 to 50,000 units per annum.

Meanwhile, Toyota has been present in Russia at St Petersburg since 2007, making the Camry large car there, although production has never yet fully utilised the initial installed capacity of 50,000 units per annum. Nonetheless, in September 2013 the company announced that capacity would be doubled, with the new capacity and probably some of the unused existing capacity, allocated to the RAV4 compact SUV. Y18bn ($176m) will be invested and the current workforce of 1,600 will be increased by 50%.

The new capacity is due to come on stream by the start of 2016. This development is in direct response to the growing demand in Russia for small and compact SUVs; Nissan’s C-segment X-Trail and Ford’s B-segment Ecosport and C-segment Kuga are other examples of SUVs produced in Russia. In the far east of Russia, Toyota has also been making low volumes of its larger Landcruiser Prado SUV. Up to 1,000 of these vehicles can be made each month by Sollers-Bussan in Vladivostok from CKD kits sent from Japan.

Stability in North America, expansion in the South
While Toyota is increasing production at a number of locations around the world, the company has decided against expanding at one of its North American plants which is presently running at full production rate. Capacity at the factory in San Antonio, Texas, which makes Tundra trucks, will remain at 200,000 units per annum despite demand running at more than 10% above this level.

Adding a new line rather than extra shifts would be desirable to meet this demand effectively on a long-term basis, but Toyota will only build the line if demand runs closer to 300,000 units a year, which the company doubts is realistic in the near-term despite the recent recovery in the North American market.

In South America, most of the automotive industry’s focus is on Brazil, but Argentina should not be forgotten. In September 2013, Toyota announced that it would expand its factory there from 92,000 to 140,000 units per annum by the end of 2015, a move which will make this plant comparable in capacity terms to Turkey (150,000 upa).

Investment at the plant at Zarate will total Y1.7 billion, with the additional capacity designed to allow increased production of the Fortuner and other vehicles made on the IMV platform, which produces commercial and mixed commercial-passenger vehicles for emerging markets. The Argentinean factory also makes the Hilux pick-up truck.

Meanwhile, at the start of February, Toyota announced that it would have to suspend production at its Venezuelan assembly plant for six weeks through to March due to a shortage of foreign currency, which would normally be used to pay for imported components. This shows that although Toyota can report broadly positive news in most markets, the company does have to deal with isolated problems.

Globalised, not localised, production
Toyota has long been one of the most global automotive companies. Back in the late 1990s/early 2000s when the Corolla was still made in Australia, this model could claim to be the most global vehicle in the history of the industry; for a time, versions of the Corolla were made on every continent of the world simultaneously – something which no other vehicle has ever achieved, nor is any likely to do so.

By contrast, Toyota is now increasingly sending vehicles around the world from one production location to a distant end market, sometimes with some counterintuitive moves. For example, the company is sending its Yaris from France to North America, despite the tiny margins on small vehicles, currency risk factors and the additional transportation costs. Production of the Yaris for North America started in May 2103 at an annual rate of 25,000 units.

In reverse, since April 2013 Toyota has been shipping the Venza SUV crossover from its plant in Kentucky to Russia and Ukraine. These markets are targeted to consume 5,000 units per year in total, just 1% of the Kentucky plant’s capacity. 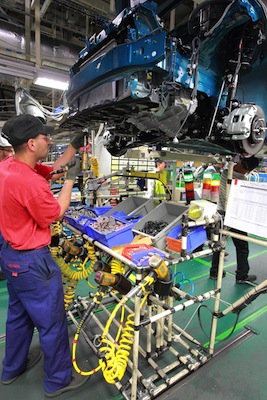 Exploring multi-platforms & JVs
One of the most notable industry trends in recent years has been the development of cross-segment platforms. Historically, platforms have been segment-specific, but there are now cases like the MQB platform at Volkswagen, which will make vehicles from the B (Polo) segment up to the D (Passat).

Toyota’s offering here is TNGA, the Toyota New Global Architecture, although to date the company has released only very limited information on this platform. The first vehicles will appear in 2015 and are understood to be in the B and C segments. Toyota has suggested that the launch of TNGA will result in an improvement of 20-30% in the development process and (as yet unstated) savings in purchasing, from greater global bulk ordering of common parts. According to Toyota’s board member for R&D, TNGA will mean that more than half the parts on models made from this platform will be common, for example with the number of different airbags being cut from 50 to 10, possibly even fewer.

In addition, there are signs that Toyota’s hitherto firm stance against joint ventures, born of its scale, capacity and the corporate confidence these engender, might be softening.

In Europe, Toyota has a small car production joint venture with PSA in the Czech Republic, making the Aygo small car alongside Peugeot and Citroen equivalents. This has recently been extended to a joint venture in compact vans, with Toyota replacing Fiat as PSA’s partner in this area, at a plant in Valenciennes, France.

In January, there was also confirmation from BMW that the two companies are developing a sports car platform, although few details have been released. This project was suggested back in July 2012, but the recent acknowledgment by BMW’s head of development, Herbert Diess, suggests that the launch of sports cars for both companies is not far off.