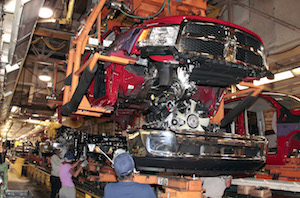 Donald Trump has arguably had more impact on manufacturing strategy than any US president in a very long time; and that is even before he has taken office. During his election campaign he lambasted US vehicle-makers, especially Ford, for building cars in Mexico, threatening to rip up the North American Free Trade Agreement (NAFTA) and to impose “a big border tax” on Mexican-made vehicles being sold in the US. At the time, he was dismissed as not understanding the industry and the car companies continued expanding in Mexico. Although there was parallel investment in the US, this did not detract from the Trump narrative that American jobs were being lost to Mexico.

Ford cancelled its planned new plant in Mexico where it would have made the Focus, diverting its funds to the transformation of the Flat Rock, Michigan, facility into a mainly electric vehicle (EV) operation. The Ford Focus will instead be made in an existing Mexican plant. Ford claims that the slowdown in the compact segment in North America – and the parallel shift to SUVs and EVs – lay behind this decision.

Following his partial success with Ford (which is not so much bringing jobs back to the US as not shipping any more of them to Mexico), Trump has now turned his attention to GM. He has attacked GM for importing the Cruze from Mexico, ignoring the fact that around 95% of the Cruzes sold in the US are made in Ohio; in reality, it would be uneconomical to make the hatchback Cruze in the US because of the need to duplicate the tooling. If the “big border tax” is implemented, GM could well drop the Cruze hatchback from its US sales line-up but continue to export it worldwide from Mexico.

Without being attacked by Trump, FCA has committed to making three new Jeep models in the US and switching a Ram pick-up from Mexico to the US. Meanwhile Toyota, for now at least, will continue with its plans to bolster Corolla output with a new Mexican plant, emphasising at the same time that it already has substantial manufacturing facilities in the US.

The Europeans, especially the Germans – Audi, BMW, Mercedes and Volkswagen – which have or are building plants in Mexico, will have to re-evaluate their plans for these factories. Towards the end of 2016, VW said it would make the Golf for the US in Germany, not Mexico; whether this was because it realised that a 10% European import tax was preferable to the duplicated tooling which would have followed production in Mexico or whether it was the fear of a “big border tax” is open to debate. But it is certain that the Trump factor is being considered at board meetings across Germany.

Suppliers, too, are worried. In a comment which echoes the situation in Europe with regard to the consequences of the Brexit vote, the CEO of Linamar, Linda Hasenfratz, claimed that “the average automotive part crosses a border seven times in North America”, adding that applying a border tax or tariff seven times would make the industry wholly uneconomical and effectively inoperable. Whether the average part really can cross the border seven times before being fitted onto a car is a moot point; if seven is the average, some parts must cross the border many times more, while others are made wholly inside the US. The point is that neither in North America nor in Europe do suppliers or their OEM clients want tariffs, due to the economic complexity and additional administrative burden they will entail.

Further changes to the vehicle companies’ production geography will certainly take place. How many of these will originate from Trump’s threats remains to be seen, but two things are certain: vehicles will continue to be made in Mexico, and those factories will increasingly orientate themselves towards global markets. The US may become more self-contained from a vehicle supply perspective, while Mexico will have to become more global in its focus.