Some OEMs have been quick to take press hardening under their own roof. AMS asks what is still to come for the technique.

Press hardening is the integration of a hot-metal forming procedure in which the material, until very recently some grade of boron steel, is heated to a very high temperature before being subjected to immediate in-mould rapid cooling. Generally the temperature will be reduced at a rate of approximately 50ºC per second from around 850ºC.

One significant advantage over its ‘cold’ or even ‘warm’ counterparts is the technique’s ability to achieve more complex shapes in the final part due to the increased ductility of the material during the forming process. A second advantage is the enhanced strength and resilience of the completed part. These factors may also enable less material to be used than otherwise, so the procedure can contribute to the ‘lightweighting’ of vehicles when used in automotive manufacturing.

Despite these attributes, the technique has perhaps so far played a less prominent role in the automotive industry than might be expected. Part of the reason is that although it was developed some time ago, the method’s availability was restricted by intellectual property laws until quite recently – the original patent was registered in the first half of the 1970s by a Swedish company, then called Norrbottens Jarnverk (which is now part of the Spanish-owned Gestamp group) and only came fully into the public domain in the last decade.

Since then take-up has accelerated and press-hardened parts are now commonplace, though perhaps not yet allpervasive.

“All the major European manufacturers use press hardened parts in their vehicles and American and Asian companies are catching up fast,” says Per Josefsson, vicepresident, global sales and service at Danish-owned AP&T, a supplier and integrator of automated press lines including those using the press-hardening technique. However, Josefsson cautions that any estimate of just how widespread these parts have become in the automotive sector can only be approximate, not least because the technique is still far from universal as an in-house OEM process. Instead, many vehicle makers still rely on specialist suppliers.

Josefsson confirms the relatively recent advent of the approach. AP&T, he says, only started providing complete press hardening lines in 2005 after carrying out further development work on the process to enhance productivity and reduce the overall ‘footprint’ of the hardware – especially, he says, the furnaces required for the initial heat process.

Nevertheless, Josefsson is confident that the benefits the approach brings mean it is already the ideal manufacturing technique for certain categories of parts, particularly those that form the cage round the passenger compartment. “It is the best for the safety cage elements such as A- and B-pillars, roof reinforcements and windshield frames,” he states.

The basic reason is simply the extra strength it can bring to the material. Josefsson says press hardening can achieve material strengths as high as 1,900 megapascals (MPa), while the limit for cold forming is in the region of 1,200-1,300MPa. Moreover he adds that both the geometrical complexity of the finished parts and die endurance achievable with cold forming can be limited in comparison. Another plus-point is that press hardening can process coated materials, most obviously those with an anti-corrosion treatment. Indeed, Josefsson estimates that probably 80 to 90% of all the steels processed by press hardening lines supplied by AP&T are coated.

Josefsson concedes that press hardening is not necessarily an easy manufacturing process to implement. The greater technological complexity of the process compared with conventional cold stamping means that it requires correspondingly greater support from highly qualified engineering staff. “You need educated personnel that understand the process,” he confirms.

Another drawback is that initial investment costs are perceptibly greater, though Josefsson is reluctant to be drawn into making any quantitative comparison. “There are too many variables involved,” he explains.

One fact on which Josefsson will cite figures is that once press-hardened parts are specified their unit cost is likely to be as much as 20% cheaper than cold-formed items. The latter are likely to be made as two or three component parts that will require joining, whereas equivalent press-hardened units can be individual as well as lighter.

One development in the technology Josefsson can foresee is greater use of tailored blanks involving different gauges of material. “We can already see that happening and it will certainly increase,” he observes.

At a more strategic level, as the technology is increasingly recognised by OEMs as crucial to furthering the twin objectives of enhanced vehicle impact resistance and lightweighting, it is likely to become a more common in-house operation. As Josefsson observes, major manufacturers like to be able understand fully and have immediate control over processes of such fundamental importance.

One customer of AP&T for which this is the case is Fiat. The company installed its first press hardening line at its plant in Casino, Italy, four years ago and has since added another four at the same location. The plant is the production site for the Fiat Bravo, Alfa Giulietta and Lancia Delta vehicles, but also acts as the supplier of press hardened parts to the company’s other sites throughout Italy.

According to Fiat’s own figures, the five lines have a total production capacity of 15,000 parts a day and are used to manufacture A-pillars, B-pillars and door and floor reinforcements. The share of press-hardened parts in the group’s different car models is currently between 10-15% of the body-in-white weight, which it says is relatively high compared to the industry average.

More pertinently the company also reports weight reductions of 22% on a part-per-part comparison between press-hardened and cold-formed parts. The company indicates it will start producing press-hardened parts for two further, as yet unidentified, vehicles before the end of this year. 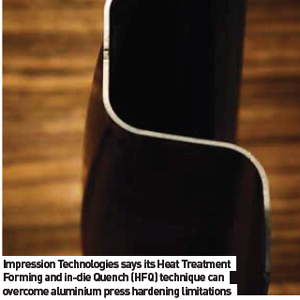 Aluminium, the next frontier

Some are asking if the press-hardening process has now reached a stage from which only gradual change will be likely in the future or is there still the potential for radical further development? Someone who answers the second part of that question with an emphatic “yes” is Dr George Adam, CEO of Impression Technologies. The new company, only formally set up at the beginning of this year, offers the opportunity for even more lightweighting through the extension of the press-hardening technique to a metal that has so far not been susceptible to it – namely, aluminium.

Dr Adam, who has considerable experience in the automotive industry starting with Rover in the late 1970s, explains that the company is seeking to commercialise development work carried out at two UK universities – Imperial College, London and the University of Birmingham. In fact, the firm is majority-owned by Imperial Innovations Group, Imperial College’s operation for managing ‘spin-outs’. Dr Adam acknowledges that the potential of aluminium for constructing lighter weight and therefore more fuel-efficient cars is already recognised – as embodied in vehicles like the Jaguar XJ and Audi A8 – but, as he also mordantly notes, none of them are mid-range, mass market cars.

He says that is because so far no vehicle with a substantial aluminium content has been able to use the material in a way that maximises its potential for either weight reduction or strength. The reason for this can be summarised in a single word – “ductility.” Quite simply, it has not been possible in many instances to form aluminium into single shapes that can achieve either the geometrical complexity or even approximate strength of steel counterparts.