Taking a shine to plastics

As tighter legislation restricts the use of traditional electroplating materials, a new method of plastics metallisation developed by Oerlikon Balzers could provide an alternative with wide-ranging benefits 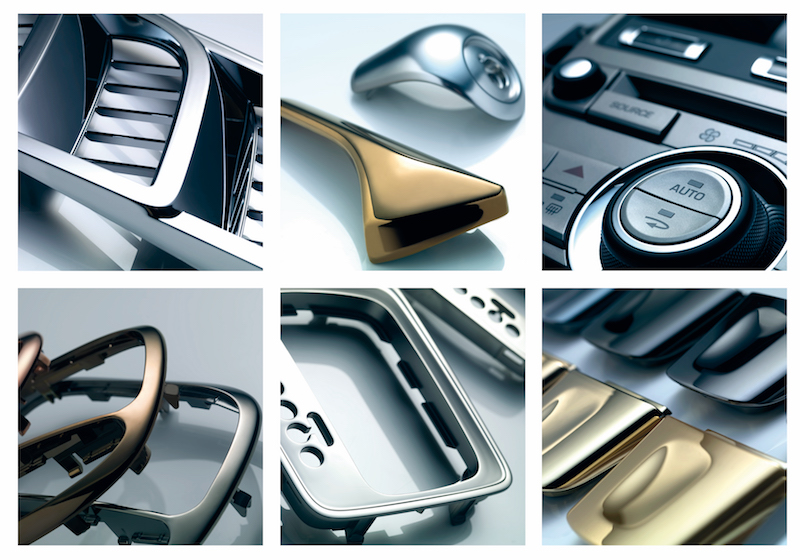 It’s an inescapable fact: human beings like shiny things. As such, automotive designers are increasingly using parts with the appearance of metal to make their vehicles – especially those at the premium end of the market – visually distinct. For example, take the Toyota Hilux, a pick-up truck traditionally favoured by farmers and construction workers the world over. A chromium finish on the front grille, wing mirrors, door handles and foot rails of the latest version imbues it with the kind of quality and sophistication which appeal to what Toyota describes as the “rapidly growing leisure market” – those who like to get wet and muddy, but only at the weekends.

The use of actual metals for these components is prohibited by cost and weight constraints, so these are substituted by metallised plastics, usually created by electroplating. In this process, the surface of the plastic – typically acrylonitrile butadiene styrene – must first be rendered electrically conductive, which is achieved by depositing a layer of nickel during chemical dipping. Once the surface of the plastic is conductive, it is immersed in a solution of metallic salts connected to a cathode. An anodic conductor is also placed in the bath, which in conjunction with the positively charged salts creates an electrical circuit. The metallic salts are therefore attracted electrically to the substrate, where they form a coating.

“Big tier-ones that do not currently have an electroplating capability can [now] change the supply chain… they have a chance to in-source the metallisation process” – Julius Schmidt, Oerlikon Balzers

However, electroplating could soon become problematic owing to the use of potentially hazardous materials in the process, such as chromium VI. This is particularly the case in the EU, with its Registration, Evaluation, Authorisation and Restriction of Chemicals (REACH) regulations. Julius Schmidt of surface technologies company Oerlikon Balzers explains: “REACH environmental regulations from the EU will restrict the use of chromium VI by September 2017. There will be an authorisation phase, meaning that those who use electroplating with chromium VI can apply for an extension to their production time – likely five to seven years – but everybody is looking for an alternative to metallise plastics that is REACH-compliant.”

Schmidt is the global sales manager for a technology called ePD, which has been developed by Oerlikon as an alternative to electroplating. Standing for embedded physical vapour deposition (PVD) for design parts, the ePD process does not require the use of chromium derivatives and produces no heavy-metal waste or contaminated wastewater – meaning that it will comply with REACH regulations. Furthermore, Schmidt claims that ePD can be used to produce parts in a more diverse range of colours, and with greater corrosion resistance, than is possible using electroplating.

Applying a triple coatingThe ePD coatings consist of three layers: a lacquer primer curable by ultraviolet (UV) radiation; a thin, metallic decorative film; and a UV lacquer topcoat. They are applied using Oerlikon’s INUBIA I 6 and I 12 systems. The cost of installing an INUBIA line is similar to the investment required for an electroplating line, according to Schmidt. Oerlikon claims that these fully automated and integrated systems enable the high-volume production of metallised parts in accordance with automotive specifications.

The process parameters and recipes for the ePD coatings are provided by Oerlikon, and can be saved and reproduced automatically at any time. Moreover, remote services can access the equipment controls, enabling the exchange and upload of parameters. Process events are recorded and can be retrieved at any time. 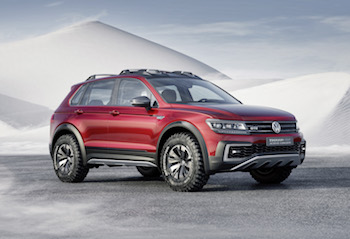 The INUBIA I6 has a maximum workpiece length of 600mm, while the limit for the I12 is 1,200mm. Using these systems, spindles containing the parts to be metallised are loaded into the machine before a snow-jet CO2 clean is carried out. The lacquer basecoat is applied and then cured using UV radiation – a system developed by Oerlikon in partnership with UK company Fujichem Sonneborn, which supplies the lacquer. “Our UV process is very fast; it’s only a matter of seconds,” Schmidt points out. The basecoat serves to normalise irregularities in the surface of the injection-moulded plastic substrate.

A metallic or metal-ceramic film is then applied to this basecoat using a magnetron sputtering PVD technique. During this process, positively charged plasma ions are accelerated by an electrical field superimposed on a negatively charged target. The positive ions strike the target with sufficient force to dislodge and eject atoms from it, which then condense on nearby surfaces.

On top of this thin, metallic film, another fast-drying UV lacquer coating is applied, which enables the appearance of the metallic layer to be tailored. Schmidt says: “It gives us flexibility. We can go from a very high-gloss look to a very low, semi-gloss or matte look by putting a matting agent into the topcoat.” The topcoat also provides protection and increases the durability of the coating.

The spindles holding the metallised parts can then be unloaded. “The cycle time for each spindle is less than 45 seconds; that means every 45 seconds we get to the next stage of the process,” Schmidt continues. “For the full INUBIA line, from putting the parts in to getting the parts out, it takes less than one hour. Other processes take much, much longer.”

Robust, thin and diverseThe resultant coatings are highly resistant to corrosion – more so than those produced using electroplating, according to Schmidt – and have withstood tests using Russian mud, which contains highly corrosive salts and is typically used to thaw ice on the roads in both Russia and Canada. The ePD process is also highly flexible, encompassing a wide variety of polymers. “In general, every polymer you can paint, we can also coat,” says Schmidt.

Further to tailoring the gloss of the coating, a wide variety of colours can be achieved. “With electroplating, you can do high-gloss chrome and satin-gloss chrome, but using other colours you are quite limited,” Schmidt points out. This capability was central to the decision by Volkswagen (VW) to use ePD for the Tiguan GTE Active concept which was presented at the Detroit Motor Show in January this year. The vehicle’s exterior-mirror covers, front-light frame and radiator-grille strips were metallised in a hue similar to haematite, called 'black chrome', which Oerlikon specialists defined in cooperation with VW designers.

Additionally, the metallic layer produced using the magnetron sputtering process is only about 0.2µm in thickness, compared with up to 60µm for electroplated coatings, and therefore conserves resources. Moreover, the ePD-coated plastic parts can be recycled easily at the end of their service life.

The thinness of the metallic layer produced via ePD means that metallised parts can be made transparent to light and electromagnetic waves. The latter function could become useful for the front ends of vehicles, where the increasing number of sensors employed – for example, for distance and collision detection – could start to compromise the aesthetics of the vehicle. Using ePD, the sensors could be concealed behind badges or front grilles. 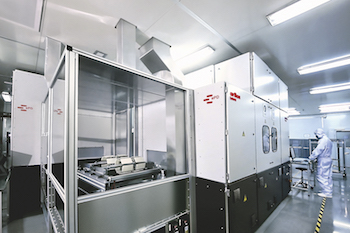 A third ePD line is currently being set up at Nanogate in Germany, due to become operational in the third quarter of 2016

Expanding customers’ capabilitiesThere are currently two ePD lines in operation, one at Oerlikon in China and one at Zanini Auto Grup in Spain, but Schmidt is working on bringing the technology to new customers, targeting three main types. The first are existing electroplaters, which may want to extend their current capabilities to produce parts that are transparent to light and electromagnetic waves. The second are coating specialists looking to enter a new market. Germany-based Nanogate, where a third ePD line is currently being set up, is good example of the latter. The company has invested in an INUBIA I6 that will become operational in the third quarter of 2016, complementing the company’s existing coating technologies.

Chief operating officer at Nanogate, Michael Jung, says: “The enhancement of plastics with high-quality, design-oriented metal coatings is becoming steadily more significant, which is why Oerlikon Balzers and Nanogate have already been working together for two years.” He continues: “Our customers have shown distinct interest. We expect market potential accessible to Nanogate in the mid-three-figure-million range for the innovative multi-functional metallisation of surfaces.”

Schmidt adds: “There's a third group of potential customers, a very interesting group for us, that includes big tier-ones that do not currently have an electroplating capability. Now they can change the supply chain, which has not been possible before with chrome-looking parts; they have a chance to in-source the metallisation process.”

Zanini Auto Grup of Spain supplies wheel-trim products, radiator grills, back-door handles, emblems, strips and airbag covers to OEMs around the world. The company has been using Oerlikon’s PVD technology since 2005 and has now installed an INUBIA P6 (paint module) for the UV lacquer coating of plastic components. This system will allow it to supply coatings based on ePD technology. The company also has the option of increasing capacity by adding a fully automated, in-line PVD coating system, which will combine PVD coating and UV paint technology in a completely integrated system.

Zanini’s manufacturing and engineering director, Xavier Serra Monté, says: “We see this as the beginning of a successful collaboration, as we plan to extend our capacities based on Oerlikon Balzers’ ePD technology within further systems in Europe, the USA and China, in accordance with market needs.”