Bridges are being burnt in today’s automotive industry. Political decisions are having a significant impact on the price of vehicles, the way in which they are sold, and where they are made. One factor that could soon play a key role is the trade war between the US and the rest of the world.

Steel that comes from China is cheap. Huge factories in the country are run by the government, which means labour costs are kept low. The factories are also supplied by their own mines, allowing them to source iron and coal without dealing with fluctuations in commodity price. As a result, demand for Chinese steel across the world has soared – statistics from the World Steel Association show that China produced around 66.4 million tonnes of steel in 1990, rising to 822.7 million tonnes in 2014. However, over the past four years, overcapacity has pushed companies to sell the steel at lower prices. 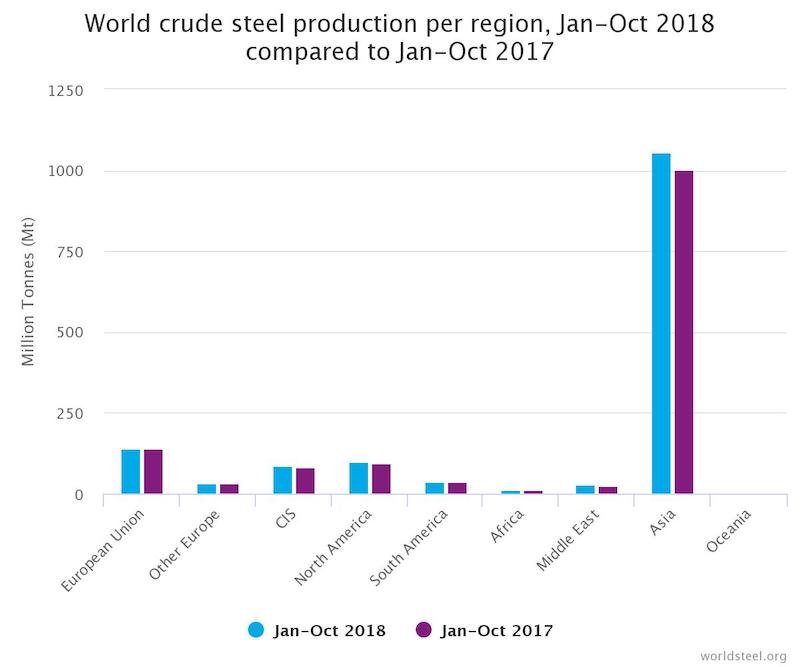 To combat this trend, and to help local steel suppliers, authorities in other countries have looked to implement measures that make it more difficult for Chinese companies to import steel.

For example, in March 2018, US president Donald Trump imposed a 25% tariff on all steel imports into the country, as well as a 10% tariff on aluminium imports. Support for the decision immediately came from the American Iron and Steel Institute. Writing for USA Today, CEO Thomas Gibson stated, “The president’s actions are working. Steel imports fell 34% from April to June, prompting job growth. US Steel has restarted facilities in Granite City, Illinois, which means 800 jobs.”

The steel industry, he continued, currently provides work for around 2m people and contributes around $520bn a year to the US economy. “A healthy and sustainable steel industry is vital to preserve the nation’s ability to protect Americans at home and abroad.”

However, many reactions to the tariffs have been negative. Jean-Claude Juncker, president of the European Commission (EC), openly slammed the move by Trump. “The EU believes these unilateral US tariffs are unjustified and at odds with World Trade Organisation rules. This is protectionism, pure and simple,” he stated.

Juncker believes that the US should have targeted Chinese imports in particular, instead of enforcing blanket tariffs that will also prevent steel from being imported from the EU into the US.

“By targeting those who are not responsible for overcapacities, the US is playing into the hands of those who are responsible for the problem,” he emphasised. “The US now leaves us with no choice but to proceed with a world trade organisation (WTO) dispute settlement case and with the imposition of additional duties on a number of imports from the US. We will defend the Union’s interests, in full compliance with international trade law.”

In retaliation, the EC placed duties on €2.8bn (US$3.2bn) worth of US goods, including steel, aluminium, farm produce, bourbon, clothes and motorbikes. Similarly, Canada imposed tariffs on C16.6bn (US$12.5bn) worth of US exports, while Mexico did the same for $3bn worth of US goods. The US tariffs, however, covered a whopping $200bn worth of goods from all countries.

‘Too early to tell’

John Bozzella, president of the Association of Global Automakers and spokesperson for Here for America, has expressed his concern regarding the impact that the tariffs will have on the cost of vehicles. He also thinks that the trade deal which could take place between US, Mexico and Canada is “much more complex than the one it would replace… and so that complexity may lead to more cost and more challenges for the [automotive] industry.”

The North American Free Trade Agreement (NAFTA) has been in place since January 1994, and requires carmakers that sell vehicles in the US to locally source 62.5% of their content. “The current NAFTA has got the competitive balance right,” Bozzella continued. “We’ve had more companies investing and producing in the US. What we want to see is the new US-Mexico-Canada Agreement (USMCA) maintains that competitive balance. There clearly will be adjustments in the supply chain and adjustments in the manufacturing footprint for companies to comply. That could upset the competitive balance, but it’s really too early to tell.”

One likely outcome will be a rise in the cost of vehicles for consumers, he added. It could also mean that carmakers are forced to open new factories and set up supply chains in more locations in order to avoid tariffs.

“The steel and aluminium tariffs remain in effect here in the US, and that is increasing the cost of auto production,” Bozzella stated. “US steel has increased in price almost to the level of the price of imported steel after the tariffs.”