Building motorcycles in India is all about high volumes. AMS takes a look at Bajaj Auto’s plant at Chakan 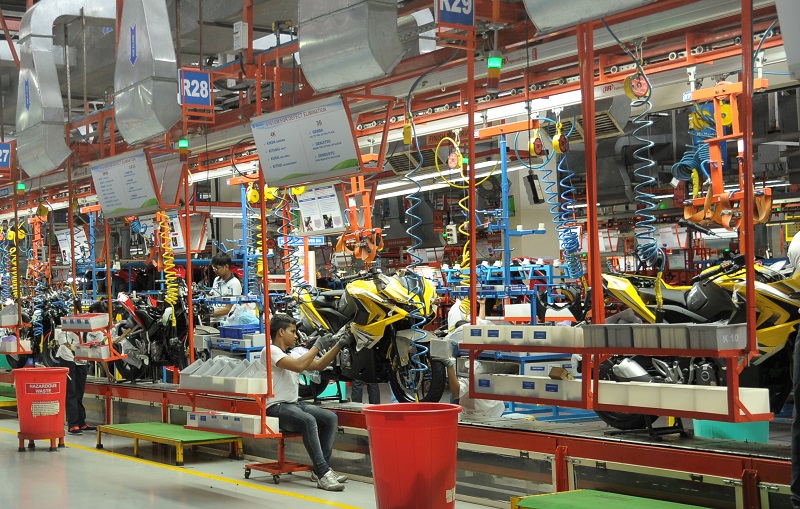 The 1,400 employees at Bajaj’s Chakan plant produce around 80,000 bikes per month across five assembly lines in two shifts over six days a week. These are big numbers especially when you consider limited amount of automation used in the assembly of two-wheelers. The production lines at the plant are a hive of activity and you get a sense of the speed of production, but also the calm efficiency with which the young workforce go about their work.

Given the volume of bikes produced, quality is paramount according to Sunil Deshpande, the plant’s deputy general manager. Bajaj Auto is one of India’s largest powered two-wheeler manufacturers, with strong sales for its Pulsar and Avenger models produced on three of the lines. The fourth line is dedicated to producing a number of KTM models. This association with the Austrian manufacturer goes back to 2007 when Bajaj Auto took a 14.5% stake in the company; this increased to 48% in 2013 further cementing the successful working relationship.

Building of the premium segmentThe plant currently produces 70,000 KTMs per year, of which around 60% are for export. Traditionally motorcycles have been seen, and sold, as low cost transport for the masses, with only Royal Enfield occupying what might be considered a premium segment in India, but this is rapidly changing with the introduction of the KTMs and high end Pulsars, and Bajaj is now producing more sports orientated, high specification models, aimed at a more leisure focused, aspirational market.

Balancing the lines with a number of different Bajaj and KTM variants can be challenging depending on volume, with variants for export adding to the complexity.

A KTM motorcycle rolls off the conveyor every 90 seconds. In case of Pulsars, it is 28 seconds. This is because the build is more complex for the Austrian brand’s models. Kitting is used extensively with neat racking attached to each bike as it travels down the line, and this helps with quality control and avoiding errors.

Keeping pace with quality controlDeshpande pointed out that the lines are 95% fault free, with quality control managed through a number of processes and systems, including the use of visual information charts to highlight production status and any downtime, along with morning meetings to discuss the previous shift’s productivity. The visual prompts include a table containing any faulty components that need to be checked and reviewed back to the supplier. A strict timetable is followed for a daily Quality Status review meeting. With such high volumes passing through the plant on a daily basis, the danger of problems being passed forward is ever present so Deshpande’s teams are well trained and vigilant.

The KTMs feature more than 95% local content and the plant as a whole operates a very lean, just-in-time process carrying only 2 hours inventory at any time. As soon as the bikes leave the line they are run through a series of tests, given a final quality inspection before being prepared and packed for delivery. This is a fast paced section of the operation and with high volumes, and no secondary storage space, the finished bikes have to be delivered quickly and efficiently.

The engines and gearboxes for both brands are assembled in-house. Critical machining operations to engine components such as cylinder heads, crank cases, crank shafts are carried out in automated machine shops. In the powertrain section, Deshpande pointed out an information board that illustrated a number of successful kaizen that had been implemented. These were examples of simple improvements, which have been very effective; firstly a special fixture had been designed which enabled crankshafts to be quickly and accurately checked to prevent any oversized parts going forward in the process. This early intervention check has improved throughput on the crankshaft line. A second solution had been in the machining operations, changing from a 32- to a 40-teeth milling tool has made a significant improvement to the cycle time.

Automation and controlAutomation levels are probably highest in this section with Fanuc machining centres and Universal robots for component handling. Indeed AGVs are used to transfer the finished engines to the main assembly shop. There are separate engine assembly lines for the Bajaj and KTM models. Kitting is again used extensively on the powertrain lines. Sensors with indicator lights are installed on assembly equipment for each station to ensure that the correct component in the right quantity has been picked by the operative. The speed and torque settings for the electric tooling is calibrated and monitored by a central system. This is common practice for powertrain assembly operations and allows the source of any issues to be tracked. End of shift meetings involving all the line engineers are held to review productivity and any issues that may have arisen. 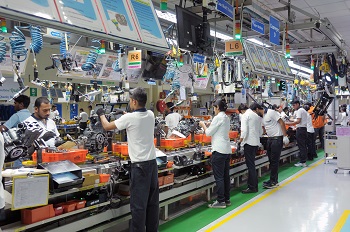 KTM engine line. Speed and torque settings for the electric tooling is calibrated and monitored by a central system

Bajaj Auto has adopted a Total Productive Maintenance (TPM) policy throughout the plant. Deshpande offered the powertrain machining operations by way of an example; the operators, having being trained in preventative maintenance, conduct a series of daily and weekly checks that monitor the function and output of the machining centres. Any signs of wear on the tooling, reduction in performance or quality of output, are picked up early and preventative measures are taken to restore the operating condition of the machine. The cell member takes complete ownership of his station and this creates a greater sense of engagement with their job. Deshpande also mentioned that the Chakan factory is the only automotive plant in India to have been awarded with TPM – “Special Award” by JIPM in 2015 and will be challenging for the JIPM – “Advanced Special Award” in the 2018.

On-going trainingChakan has a young workforce. According to Deshpande the average age of cell members is 24. The company operates a standard in-house training system for new employees where they are given basic explanations of the systems and components they will be working with before on-the-job training. The training centre, located next to the powertrain section, features a small section of production line for training purposes and for trying out new operations. The training process is on-going for the workforce, who are encouraged to increase their skill levels. Most of the current employees hold a diploma in engineering and the company is working with colleges across India to support this.

A key factor to achieving sales success in India is to offer vehicles designed for the domestic market. Bajaj Auto has an R&D section based in Akurdi – Pune, working on updates of current models (very important to Indian consumers) and developing new ranges; this has probably taken on more importance as the market for premium motorcycles grows. Deshpande noted that development of a new model can progress from design to production in just 15 months, and that the Chakan plant is classed as a Manufacturing Laboratory where new ideas and concepts are developed for mass production and then rolled out to other plants.

This was the one plant AMS visited in India where there was no under-utilised capacity, far from it with Chakan recently reaching its 10 millionth motorcycle milestone. 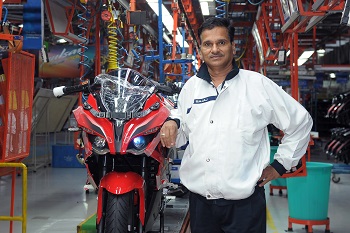 AMS: It’s been reported that KTM might build their Husqvarna motorcycles in India. Will they be produced at Chakan?

Sunil Deshpande (SD): This is going to happen. There are two parts to this project: engines and vehicles. Initially we will be building engines to send to the KTM plant in Austria, along with some other parts we produce here. The next phase will be assembling the complete bike at Chakan, but this is yet to be finalised.

The time scale on this is around 1.5 years. Initially the bikes built here would be for export only, but in the longer term its possible they might be sold into the Indian market.

AMS: Do you have enough space to expand on this site?

SD: We have enough space in this plant and if required we can do further expansion in plant. This is an advantage as we can utilise our existing suppliers situated around our Chakan plant.

AMS: Are you planning to add any new production operations or equipment to this plant?