An innovative electric drive, which promises significant savings in space and weight for off-road vehicle applications, could be on the market before too long 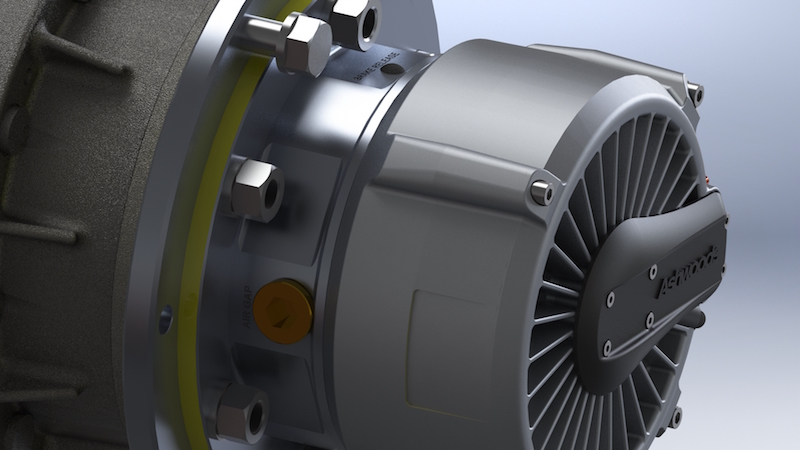 Collaboration between US transmission specialist Oerlikon Fairfield and the UK’s Ashwoods Electrical Motors, has led to the development of a new, ultra-compact device that is up to 70% smaller and lighter, and 20% more efficient than existing established motors used in off-highway traction applications, which use brushed DC or induction motors coupled to a planetary gearbox. The innovative electric drive, which is yet to receive a formal name, comprises existing products from both companies – namely, an Oerlikon Fairfield Torque Hub planetary drive and an Interior Permanent Magnet (IPM) motor from Ashwoods.

A technical paper published by the two companies, provides details of a 76kg unit, 293mm in diameter and 408mm in length, which delivers up to 3846Nm of output torque and a maximum braking torque of 4807.5Nm. Maximum power is 9kW with a top output speed of 62rpm.

This is achieved with a configuration that provides a triple planetary ratio in the length of a standard double planetary design. Furthermore, those two technologies are combined with an integrated electric parking brake, which has enabled the elimination of several duplicated or redundant components – for example, a common shaft is used for motor, brake and transmission – a technique which also helps save weight, cost and package space.

Wider off-highway applicationsThese performance figures are confirmed by Dean Elmore, vice-president, engineering, Drive Systems Americas for Oerlikon Fairfield, based in Lafayette, Indiana. “The Torque Hub product is already widely used in off-road applications such as aerial work platforms (AWPs) and other construction, mining and agricultural machines,” he says. “But by integrating the Ashwoods and torque hub products, we can produce a very compact unit that will be optimised to meet a variety of applications.” He explains that the company’s current electric drive products focus mainly on AWPs, but that the compactness of the new drive will make it capable of use on such machines as forklift trucks and mini excavators.

A mostly manual assembly for off-highway products, the newly developed motor can easily be integrated

Elmore identifies “the unique features of interior permanent magnet motors” as crucial to the performance the new device achieves. In this respect, as he acknowledges, the use of the Ashwoods’ motor is particularly noteworthy. “The Ashwoods motor is new to the industry and offers a very compact unit that exceeds the torque and efficiency of competitive products,” he says. The key point about an IPM is that it combines both reluctance and permanent magnet motor technologies. The distinguishing feature of the former is that it can produce torque without any use of magnets while the latter achieves a very high torque density as a consequence of the high air-gap flux density produced by the use of rare earth magnets.

Encapsulated magnet designSuccessfully combining these two approaches results in a motor that can provide a similar torque density to an equivalent permanent magnet motor, but with up to 70% less magnet material. One of the ways this is achieved is by embedding the magnets within the rotor design, which eliminates the risk of failure caused by a magnet separating from the rotor. An additional benefit of completely encapsulating the magnets in this way is that they can be protected from both environmental and vibration fatigue.

In the case of the Ashwoods’ IPM products, Oerlikon takes the view that they have the particular benefit of having been developed from the start with highly cost-competitive markets, like that for off-road vehicles, in mind. It also points out that the Ashwoods design effectively combats one of the traditional drawbacks of the general interior permanent magnet motor concept, which is that their relatively low weight and volume mean that the motor core cannot function effectively as a heat-sink to distribute losses created within the machine. The Ashwoods’ units counter this by a clever air circulation technique that enables continuous high power operation.

But Elmore is also quite explicit about the major challenge involved in integrating an IPM motor into a product that could satisfy real market requirements - in other words, cost-effectiveness. “IPM motors are widely used in the automotive industry today, but they are highly optimised for performance and thus costly. But Ashwoods has scaled its IPM motors from high-cost, highly optimised models and targeted cost-competitive off-highway applications,” he explains.

Integrating the parking brakeIn particular, says Elmore, a key issue was that of “integrating the two components together while optimising the motor’s strength of compactness.” He also acknowledges that the successful integration of the third element of the unit – the parking brake – is also important. “It is a key component of an electric drive system and such integration is often necessary in many applications where the vehicle needs to hold on a gradient,” he states. “Integration of the brake in electric drive is not new, but Ashwoods and Fairfield have worked together to integrate the component such that compactness of design can be maximised.”

Interestingly Elmore concedes that while the current design provides competitive dimensions in terms of compactness, there is still some work being done to shorten the overall package length. “This work is in progress,” he states emphatically, adding that he is confident the new product has something quite distinct to offer to companies that will want to install it in vehicles. “The strength of the electric drive package comes from ease of assembly for the customer,” he says. “The drive is designed such that it can be mounted to a vehicle without much design modification on the frame.”

"By integrating the Ashwoods and Torque Hub products, we can produce a very compact unit that will be optimised to meet a variety of applications" - Dean Elmore, Oerlikon Fairfield

Simple assembly and thorough testingThe assembly process for the product itself will not be complicated. “Due to the low annual quantity of off-highway product, the assembly process is mostly manual,” he confirms. However, he adds that a “100% functional check through automated production testing” means that Oerlikon Fairfield is entirely confident of the quality levels it will be able to build into the product. Meanwhile the company also indicates that the practical testing it has carried out has vindicated its optimistic projections about likely product performance.

“To date the testing has proven that the power and efficiency are very impressive when related to the size of the motor,” reports Elmore. “Higher efficiency not only means the drive uses less energy to create same amount of power during drive condition, but also that it can recapture more energy during regenerative braking. This results in longer drive duration for a full electric vehicle and higher fuel efficiency for a hybrid vehicle.” Further testing, however, is set to take place. “These lab and field tests are still continuing and specific vehicle efficiency goals will be measured in a few months,” he says. “We continue to review and implement integration and cost improvement ideas.”

Even more significantly, real possible users are now also becoming involved in the process of preparing the product for final approval, manufacturing and release to the market. “We are also evaluating several potential customers and prototypes are being tested at customers,” Elmore states.