Shanghai Auto has no intentions of giving up its position as China’s number one automaker. AMS looks at its manufacturing operations and future plans 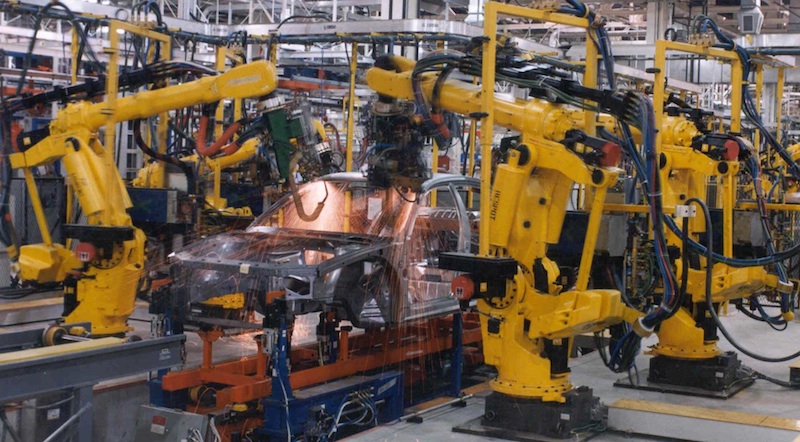 Shanghai Auto clearly has a major desire to keep on expanding its reach. It also now has a successful low cost brand, Baojun, which continues to be developed in partnership with General Motors. In light commercials, meanwhile, SAIC owns the assets of the former UK-based LDV Vans and began building that firm's Maxus delivery van at a plant in Wuxi in mid-2011. This has since been expanded to include the GM platform G10 range.

Collaboration with GM
SGMW’s latest plant is in the city of Chongqing. It was completed in less than two years, opening in late 2014. Annual production capacity of this 1.6m sq. metre site is 400,000 vehicles and 400,000 engines. The JV’s strategy in opening this new production base is to attack the increasingly successful Changan Auto in its home city.

Chongqing joins existing SGMW manufacturing bases in Liuzhou, Guangxi Zhuang Autonomous Region, and Qingdao, Shandong. The new production base not only offers a strategic position in southern, northern and midwestern China but will also see SGMW reaching its production target of 2m vehicles per year by the end of 2015.

Baojun SAIC and GM go low-cost
The first car for the Baojun brand was launched in China five years ago. Unlike so many other low-cost collaboration projects, this one is clearly working. The range is constantly being expanded, with the original 630 from 2010 having been joined by the 610 and 730 models, with the 560 and 330 on the way. The 630, which is based upon the out of production Daewoo Nubira, was engineered in Melbourne by GM Holden. It is now exported from China but without the Baojun badges: North African markets sell it as the Chevrolet Optra.

The 560, likely to become Baojun’s next best seller, will soon join China’s hot-selling small compact crossover segment. Developed in China using the GM Global Delta platform, this model will be manufactured by SGMW at Liuzhou in Gunagxi province. The car’s 1.8-litre VVT i-TECH engine is a JV between SAIC and GM, while SGMW says its future Baojun 560 "is built on a Lotus chassis developed to maximise comfort and handling". As for the body structure, this has “more than 55% high-strength steel”. SGMW states that it will use “industry-leading thermoforming and laser welding technology” so that the model can meet the C-NCAP five-star safety standard.

Shanghai GM first to build new Chevrolet Cruze
The new generation Cruze went on sale in China in August 2014, which will have been some 16 months ahead of its introduction in North America. The Shanghai-built sedan was also the first model for GM's latest 1.4-litre turbocharged and 1.5-litre naturally aspirated four-cylinder Ecotec petrol engines. The Cruze is also offered with a new DCG seven-speed dual-clutch transmission co-developed by GM and SAIC, a six-speed manual transmission developed in Europe, and the third-generation S6 six-speed automated manual transmission.

At the other end of the price scale, GM and SAIC see a big future for the former’s Cadillac brand. The ATS sedan, a would-be rival for the BMW 3 Series, introduced GM's rear- and all-wheel drive Alpha platform. The car is built at Grand River in Michigan, but China has its own locally made model, the long wheelbase ATS-L. This is manufactured at the South Plant in Pudong (Shanghai) and has much pressure on it to be a main factor in Cadillac’s ambitious twin goals. These are to both triple annual sales in China to 100,000 units by the end of 2015 and then raise the brand’s share of the luxury car market to 10% by 2020.

Yet more crossovers for Cadillac must be an essential part of any future success. The brand’s next step will be the arrival of a replacement for the Lexus RX-sized SRX. This, project C1UL, is coming soon for the Spring Hill plant in the US, with Shanghai GM almost certain to also begin manufacturing it in 2016. The model name should be ‘XT5’. A smaller ‘XT2’ (project code: D2JL) should follow in 2018 as a rival for the Mercedes-Benz GLA-Class, with a CT2 sedan (D2SL) joining it soon after. Both are being developed on a shortened version of the Alpha RWD/AWD architecture.

"China is not only the Volkswagen Group's largest and most important market; it has also become the Group's second home market. We intend to develop the entire country as a company with local roots" – Jochem Heizmann, Volkswagen Group China

SVW
The Volkswagen Group delivered 3.7m vehicles to customers in China last year and it continues to add manufacturing capacity for both its FAW VW (see p22) and Shanghai Volkswagen JVs. The latest part of the company’s €22 billion in planned investments by 2019 has just begun operations. This new SVW plant in Changsha, southern China, is the VW Group's 119th global facility and its 20th in China.

"China is not only the Volkswagen Group's largest and most important market; it has also become the Group's second home market. We intend to develop the entire country as a company with local roots, Jochem Heizmann, CEO of Volkswagen Group China stated at the May 2015 opening ceremony. "The plant in Changsha is a key step in our "Go South" strategy in China. This new facility will bring us nearer to our Chinese customers and also improve the quality of our supply chain."

The first model for this site is the existing Volkswagen New Lavida, a small sedan. Other models will follow, and these include the future Škoda SK416 project, a crossover, as well as the next VW Tiguan (VW326). Unlike the NCS platform New Lavida, these will be based on the more modern MQB/A/B architecture. The initial capacity of the plant is 300,000 vehicles per year, and together with the neighbouring supplier park, a combined 8,000 jobs have been created.

Thanks to E-scrub dry-painting technology, water and energy consumption at Changsha have been reduced by more than 20% compared to older SVW plants. Excess paint particles are filtered out in an environmentally compatible way by an electrostatic precipitator system. Fresh water consumption in production has also been reduced by 20 percent compared to conventional processes. This is thanks to the harvesting of rainwater and recycling of production water. In addition, solar panels generate more than 10,000 MWh of power and this is supplemented by energy drawn from a local hydroelectric plant. Volkswagen proudly states that all production at Changsha is therefore carbon-neutral.

MG goes 4x4 with GKN
Many doubted that a company as conservative and slow moving as SAIC could reinvent the MG brand. Until recently, their assessment seemed accurate, with vehicle sales failing to take off, especially in China. Things are changing, however, and even the SKD plant in England is now beginning to become busier thanks to strong UK market MG registrations, albeit from a low base. As at the end of May, these stood at 1,436 units for the year-to date, a 42% rise (source: SMMT).

SAIC Motor bundles its domestic market sales into a combined ‘Passenger Vehicles’ but even so, the latest total shows a 34% plunge for the first five months of 2015 to 56,96 units. Most of these will be MGs, though the Roewe brand also makes up some of the total.

MG’s aged hatchback range is the main reason why registrations have taken such a tumble, combined with buyer preference shifting rapidly towards SUVs and crossovers. SAIC saw this development coming and has now relaunched MG by adding the GS Rui Teng. Production commenced in March 2015. This Ford Kuga rival will also be assembled in the UK from 2016. The GS Rui Tang uses SAIC’s C  platform.

Shanghai GKN Huayu Driveline systems (SDS), a joint venture between GKN and Huayu Automotive, supplies the complete driveline for MG’s first SUV, from transmission to wheel. Front and rear sideshafts, propshafts, power transfer units and rear drive modules are all manufactured locally but the electromagnetic control device and hypoid gears are sourced from Japan. The complete system is assembled and delivered just-in-time to SAIC’s MG plant in Shanghai.

GKN Driveline is expected to supply similar technology for MG’s second 4x4. This is due in showrooms later this year and will be a smaller model in the style of the Nissan Juke. The project code is AP21.

The Roewe brand markets the E50, a small plug-in model, in certain Chinese cities. It has an 18kWh electric motor, and battery pack is supplied by Shanghai Jiexin Power Battery Systems, a joint venture between SAIC and A123. Thanks to extensive use of special lightweight materials, this 3.7m long hatchback is claimed to weigh just 1,080kg. An experimental MG, the Dynamo concept, was revealed to the media at an event in London in April 2014. It is believed to be based upon the E50 and may yet reach production. At the other end of the size scale, a plug-in version of the Maxus G10 passenger van will be launched in China by year-end. This, the EG10, was shown to the media as a prototype in June 2015.

SAIC is also collaborating with Volkswagen for EVs. The SVW joint venture should add a new division in 2016. This brand, set to be called ‘Tantus’, should build Volkswagen-based plug-in small cars. An EV based on the VW Lavida sedan is also under development, SVW stated in June 2015. The car will be launched in China "in four years' time" and manufactured at the Anting plant west of Shanghai. This plant presently builds various VW and Skoda models.

While its Indian manufacturing operations are only modestly successful, SAIC seems determined to keep raising its production capability throughout Asia. An assembly plant in Thailand builds MG cars but its 50,000 unit annual capacity is taking longer to be reached than the firm had originally hoped. Much of that is due to weak brand recognition.

A second plant, also likely to be in Rayong, is in the planning stages. This too will be a 51/49 JV with local company Charoen Pokphand Group. Its capacity will be 110,000/annum, SAIC president Wu Huan stated in November 2014. As well as building small cars for the Thai market, this facility is intended to become an export base for the ASEAN region. As is the case with Rayong, production is to be mainly right-hand drive cars, with the UK, Malaysia, Indonesia, Australia and New Zealand the target export destinations.

The failure of a previous production operation in Indonesia has seen General Motors rethinking its strategy for the local market, and it has now decided that this should centre on a collaboration with SAIC. SGMW is now building a new plant near Jakarta and this will manufacture Wuling minivans. Again, the Chinese firm sees this factory as a long term bet and has plans for exports to other ASEAN nations.