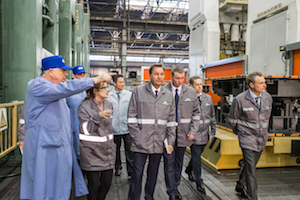 Toyota has confirmed a production start date of August 2016 for the RAV4, which will be built at St Petersburg alongside the Camry sedan. Just over 7.1 billion roubles ($100.7m) will be invested, helping to increase capacity from 50,000 to 100,000 units per year, although it remains to be seen if all of this will be used. But news of the RAV4 being produced in Russia is scarcely news at all, rather a reiteration of Toyota’s commitment to the country; the company confirmed the doubling of capacity for the RAV4 when the current Camry started production in December 2014.

Toyota’s announcement came not long after Hyundai Russia announced an expansion of exports, to Egypt and Lebanon – locations beyond Russia’s traditional export markets. Datsun had also suggested that the weakness of the rouble made exporting from Russia a sensible strategy. With Moscow’s politicians also feeling increasingly confident on the global stage, GAZ is reportedly discussing the establishment of a factory in Iran, following in the footsteps of Renault and PSA, the first European vehicle companies to announce new ventures there after the end of sanctions.

Russia’s automotive industry is, however, not out of the woods yet. The government has confirmed that in 2016 the industry will receive subsidies worth around 50 billion roubles ($731.6m), mainly through the scrapping of old cars. The government has set out its objectives in ‘Strategy 2025’, which is focused on increasing import substitution, of both cars and components, and boosting export volumes, particularly beyond the former Soviet Union. The government’s Decree 166 (2011) required foreign manufacturers to commit to making at least 300,000 cars a year in Russia by 2015, up from 25,000, in return for exemption from import tariffs on parts. In parallel, the Decree helped to boost local suppliers, with Renault claiming it had reached 70% localisation for powertrains on the Lada and Renault models made in Russia. Other vehicle companies are not so sure; PSA Russia has said that achieving 70% local content is a serious challenge.

Despite Renault’s success with localisation, the Russian supply chain is still plagued by quality problems. This was especially the case at AvtoVAZ. Former CEO Bo Andersson, recently replaced by a Renault executive, cut a number of underperforming suppliers from the AvtoVAZ supply panel. Although highly likely to have been merited on quality grounds, this move did not meet with political approval, so it was not surprising that he was replaced. Renault will, no doubt, have agreed to commit significant supply chain management resources to Russia, especially to support the imminent start of production of the 4x4 Kaptur (derived from the successful, two-wheel-drive, Spanish-made Captur).

Production and sales in Russia collapsed in the last few years as the economy imploded. Government scrappage subsidies have ameliorated the situation but the Russian automotive manufacturing sector is far from fully recovered, with a great deal of capacity un- or under-used. However, there were no major casualties apart from GM, and the signs are that Russia's automotive industry may be getting back on its feet – even if its steps remain unsteady.