Mixing together at PaintExpo

At the latest coatings show, held in Karlsruhe, Germany, in April, companies from a range of industries converged to share ideas and innovations. AMS went to see what might be of interest to automotive players 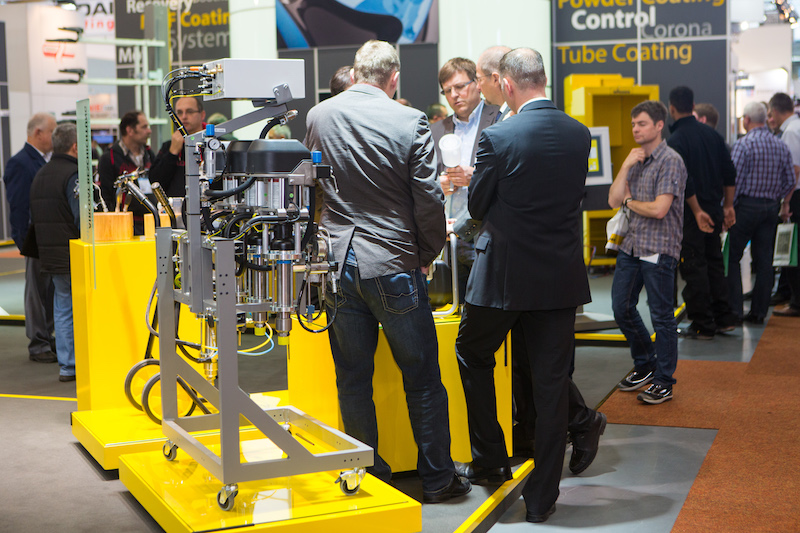 Other shows have come and gone, but PaintExpo continues to develop as a forum for companies and technologies across the industrial coatings spectrum. Now in its sixth year, the exhibition in April at Karlsruhe, Germany, attracted 501 exhibitors and 10,522 visitors over the course of four days, representing an increase of 6.8% and 14.8% respectively on 2014. The number of exhibitors has more than doubled in ten years, as has the floorspace, which totalled 13,437 sq.m this year. Almost one-third of the exhibitors in 2016 came from outside Germany, from 27 countries, while the visitors originated from even further afield: 74 countries and all of the continents.

PaintExpo was even expected to attract attendees from Iran after the lifting of international sanctions against the country, according to Jürgen Hausmann, managing director of event promoter FairFair. Addressing the media on day one, he said that the show has succeeded over the years because its organisers have “stuck to our philosophy not to dilute our business”; PaintExpo focuses on liquid painting, powder coating and coil coating.

There was plenty to cover, however: the entire process chain from pretreatment to quality assurance, whether for metals, plastics or other materials. While energy and material efficiency, quality, flexibility, productivity and sustainability are running themes, a fresher topic this year was the implementation of Industry 4.0 or the Internet of Things into paintshop operations. Many of the related innovations on show were relevant to the automotive industry, as were more conventional technologies primed to maximise the performance of paint operations as they stand today (see box). Looking ahead, Hausmann hinted that a future focus for PaintExpo will be the developing field of pretreatments, which he expects will feature strongly at the next show.

Tackling higher consumption and emissionsSpeaking after Hausmann at the press conference was Michael Hilt, Fraunhofer Institute’s head of department for Coating Systems and Painting Technology, who explained that the general business environment “has not changed a lot” over the past few years, although “fashionable notions” have emerged. In the longer term, he said, costs will remain a top priority but resource and energy efficiency will become increasingly important as the global population grows, demand for coatings rises and raw materials are depleted. In particular, emerging markets such as India will have to “get their act together” as their intensifying industrial output poses a growing threat to the environment.

Coatings are moving increasingly towards multi-functionality, but combining high-tech characteristics in a single product is a challenge

Hilt is convinced, however, that “we have a bright future ahead of us” and foresees a future in which manufacturing processes become optimised to the extent of eliminating waste completely; all products will be recycled into the biological or industrial cycle. While acknowledging that predictions are “hazardous”, Hilt suggested that other developments will include: more automation in production; smaller, smarter factories with streamlined processes; the “ultra-late” personalisation of vehicles; the wider application of overspray-free painting; and other technological innovations, such as multi-functional, intelligent coatings inspired by nature.

Increasing demands on coating capabilitiesHilt’s presentation was followed by one from Jens Pudewills of the German Research Association for Surface Treatment, who noted the growing list of characteristics which coatings are expected to offer: corrosion resistance; attractiveness; special effects such as pearl lustre; protection against ambient influences; resistance to breakage, vandalism and other stressors; self-cleaning capability; non-pollution; anti-microbial properties; and the ability to self-heal. He asked whether all of these demands can, in fact, be met at the same time.

For instance, products which are anti-microbial or self-cleaning already exist, but the current anti-microbial products are not sufficiently self-cleaning. Coatings which have been made highly scratch resistant, for example by ultraviolet curing, dual curing (crosslinking and two-component curing) or the embedding of nanoparticles, are subsequently more difficult to polish, affecting surface aesthetics. The challenge lies in combining key capabilities to create a multi-functional, high-tech solution.

Indeed, there is no shortage of high technology in the realm of industrial coatings. In addition to examples like self-healing finishes, there are switchable coatings with characteristics, such as surface tension, which can be altered by environmental factors including light, temperature and pH value. This effectively means that the coatings can be ‘switched’ on and off with regard to a particular performance attribute. These products reflect phenomena in the natural world, as mentioned by Hilt in his own presentation, such as the ability of chameleons to change their colour fluidly. Further biological inspiration comes from the marine world; Pudewills added that shark skin is being used as a basis for studies to improve the flow characteristics of coatings.

Hilt had declared that we are living in the Anthropocene Age, in which human beings are the key determinants of global development. “The best way to predict the future is to invent it,” he said, quoting the computer scientist Alan Kay. Judging by the intriguing ideas covered at PaintExpo 2016, so far we have only scratched the surface of what paints and coatings can achieve on a technological level, and we can expect more to come – but we must also bear in mind that with these and future innovations comes the responsibility to preserve the natural world inspiring at least a few of them.

Exhibitors with an automotive angle – and what they offered

AkzoNobel – a range of interior and exterior coatings

Asis – an automatic sanding system for plastic, carbon or metal components, with automatic changeover of sanding media in under 15 seconds

Cisart – manual, horizontal, anodising lines through to fully automated, vertical painting lines, for the treatment of parts ranging from nuts and bolts through 12-metre extruded profiles to two-metre-wide coils

Dürr – the EcoBell2 SL to paint small and large workpieces, consisting of either a conventional spray gun or a high-rotation atomiser with internal or external charging, or without high voltage, which can handle liquid 1K/2K paints at up to 200 bar and with transfer efficiency of up to 95%

Exel Technology – spraying and finishing equipment such as guns and pumps, plus powder coating systems

Frei Lacke – interior and exterior coatings, including e-coats and powder and liquid products

Graco – dispensing and metering systems including pumps and guns

Hönle UV Technology – UV curing units for components, including UVAPRINT and pureUV dryers with all standard spectra and arc lengths from 100mm to 2,600mm, compatible with clean rooms owing to an external air supply/exhaust; curing units such as LED Powerline

Kawasaki Robotics – robot arms in various sizes and configurations, such as the six-axis model with horizontal waist joint 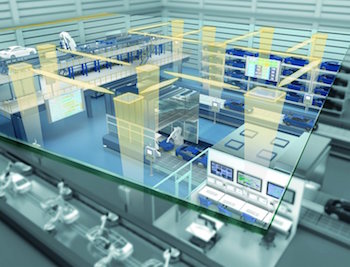 PPG – a range of coatings, adhesives and sealants

Reiter – the high-rotation Center Bell 2012 atomiser, capable of quick changes in robotic applications (part replacement in under two minutes), equipped with a newly optimised shaping air system and modified bell cap to ensure a homogenous spray pattern with or without electrostatics – suitable for bumpers and other plastic attachments, and for use with both solvent-based and water-based paints

Scheuchl – equipment for air purification, heat and solvent recovery, and dehumidification of process air, with a special focus on retrofits in the production areas of mid-sized operations

Sherwin-Williams – a range of interior coatings

Sturm Gruppe – a UV system to cure coatings on complex plastic parts within seconds in a nitrogen atmosphere, saving on time, space and energy; automatic coating lines for the treatment of metal and plastic components with adhesives and solvent-based, water-based or UV paints; associated pretreatment and cleaning technology

Sprimag – equipment for the coating of metal, plastic and other parts