A crossroads for Germany’s car industry? 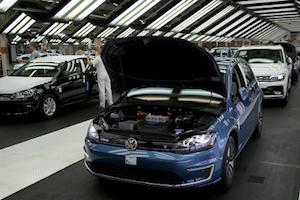 These are challenging times for the automotive industry, especially in Germany, where it is a bellwether for the country’s economic health. But, as the Eurozone slowly emerges from its torpor, Germany’s automotive industry faces several 'mega-issues' with uncertain outcomes, notably the continued fall-out from the emissions scandal; the move toward electrified and autonomous vehicles; increased robotics and manufacturing automation, with attendant implications for jobs; and imminent changes in how cars are owned, leased or shared.

As if this was not enough, BMW (with Mini and Rolls-Royce) and Volkswagen (with Bentley) have to deal with the implications of Brexit; along with Daimler, they are also facing uncertainty in Mexico as President Trump threatens to rip up NAFTA. Meanwhile, the diesel emissions scandal is no longer limited to VW and Audi but appears to be taking the whole German automotive industry along for the ride. Potentially even more significant is the launch of a cartel investigation into alleged illegal collaboration between the German car companies.

With significant capital required to move speedily to fully electric or electrified powertrains as well as autonomous vehicles, the OEMs’ finances are more stretched than ever. Having to contend with the cost of the emissions crisis, and now a wide-ranging cartel investigation, could prove immensely damaging for the German car industry. A very different industry may well emerge; right now, we need to ask if it has the resources to handle all these challenges.

The investigation into whether and how VW, Daimler and BMW collaborated on various technological matters will be far-reaching (note how Ford and Opel were excluded from this process). Company executives are said to have met more than 1,000 times in the last five years alone, to discuss issues such as the size of AdBlue tanks (AdBlue being a urea solution for reducing emissions). Investigators are also examining the same companies’ three-way acquisition of Nokia’s digital mapping service, which is part of their collective efforts to fight off Tesla, Uber and Google. So far, the companies have said little, except denying with varying degrees of force that any collaboration took place. However, BMW simultaneously suspended collaborations with Daimler, the company which initially opened up to the authorities, possibly hoping for leniency.

While the authorities begin their investigations, the German car industry has become caught up in the national election campaign. Chancellor Merkel and her opponents have, at different times and with differing emphases, highlighted the industry’s problems, telling it to change and admit corporate misdeeds, for the good of the country.

It is also worth noting how collaboration and technology sharing have been commonplace in the industry, worldwide. Nissan and Ford shared SUV production in Spain in the 1990s, as did VW and Ford for MPV production in Portugal around the same time. As a prelude to buying GM Europe, PSA established three collaborative vehicle programmes with the American OEM; and, of course, Nissan and Renault have held cross-shareholdings, covering purchasing and manufacturing systems and a range of key technologies, for many years. There are other examples of collaboration which have not drawn the authorities’ ire.

So what is different here and now? Quite probably the alleged cartel did not act in consumers’ interests, especially in terms of the size of the AdBlue tanks and their need to be refilled more frequently than a larger tank; and there is no doubt that consumers have been hit financially by the diesel scandal, first over-paying and then losing on residual values.

However, collaboration also takes place in a variety of unseen places without consumers being harmed. I once visited a tier-three supplier of subassemblies for seat frames. The intriguing thing here was that the same seat frame structure was used in a variety of models at three different car companies. This had been signed off to cut development and production costs, and with the greater production volume, the tier-three could make a profit. Now, however, the car companies’ profits – and therefore future investment in new technologies – will be cut severely by the costs of the various investigations and fines which are likely to ensue. Additionally, suppliers may well be unable to share technologies between vehicle-makers, driving their costs higher.

No one should be excusing anti-competitive behaviour and I certainly am not, but dealing with it now will surely have unintended consequences in terms of funds and resources available to deal with the mega-issues highlighted above, and that cannot be good for the long-term health of the industry. For the German automotive industry, there is so much to deal with in the short term that the long term will have to wait.