After a period of falling sales and reduced production, India’s commercial vehicle market is now on the rise 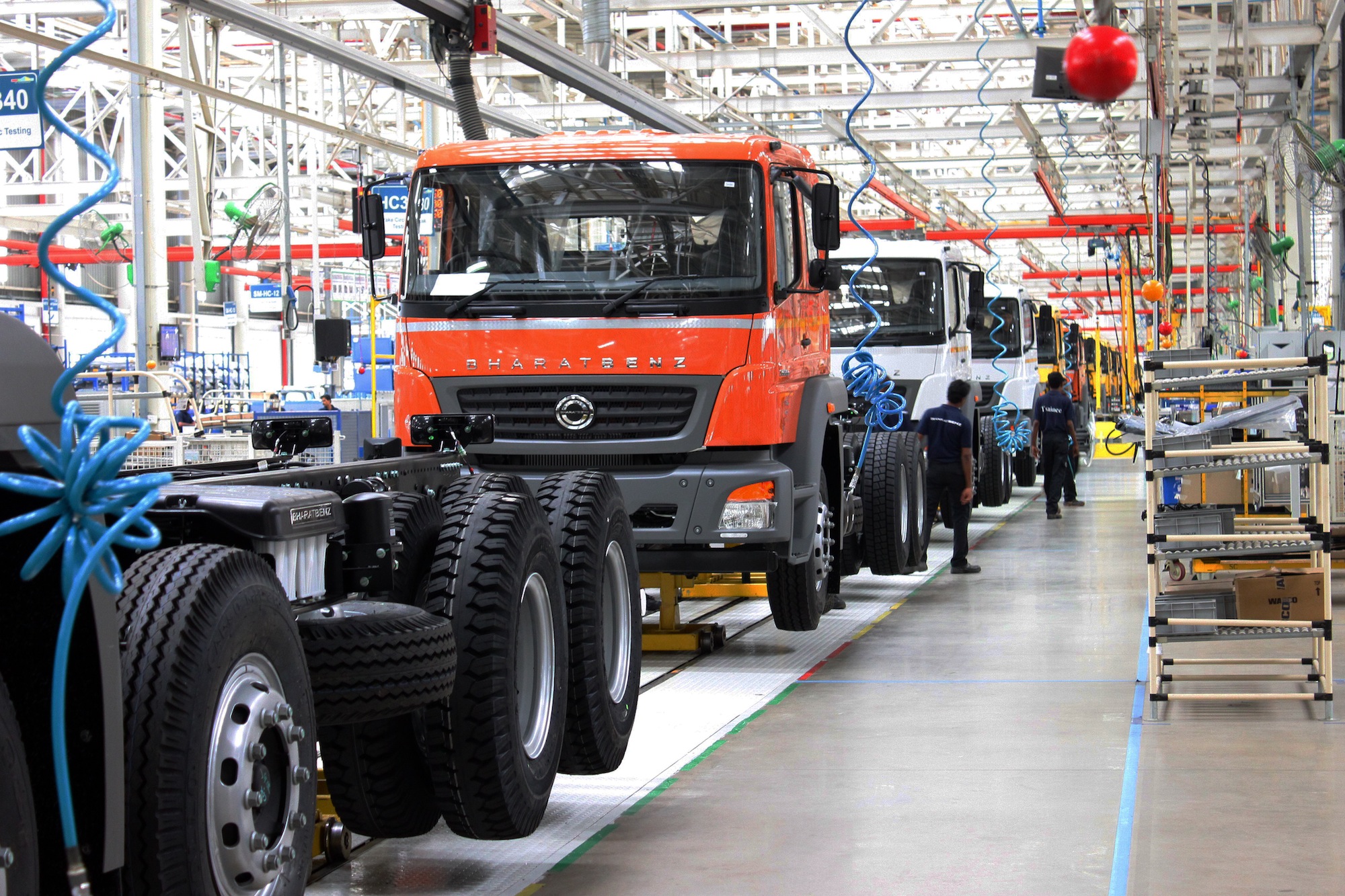 The commercial vehicle (CV) market in India had slumped so badly in the last couple of years, it prompted local maker Ashkok-Leyland to kick off its 2013/2014 financial report with this quote from Chinese warrior-philosopher Sun-Tzu: “In the midst of chaos, there is always opportunity”.

Behind Tata Motors, Ashok is the second-biggest truck-maker in the country, but the loss-making subsidiary of the Hinduja industrial group could not see much opportunity as the CV market crashed by 20% in the financial year to the end of March 2014. Medium and heavy commercial vehicles (M&HCV) fared even worse, down 25.3%. Between April and August, however, the falls were not so steep, especially for the M&HCV class, which was down 5% compared to the same period last year, according to the Society of Indian Automotive Manufacturers (SIAM).

Truck-makers and analysts are now bullish again. “The all-time low of the market has turned,” Anders Grundströmer, managing director of Scania India, told AMS last October. Meanwhile, analyst group IHS Automotive’s head of Asia for commercial sector, Amit Kaushik, described the market as now being in the "stabilisation phase". One big reason for the optimism is due to a change of political party after the elections in May, which gave the prime minister’s job to the reformist head of the BJP party, Narendra Modi. “I think it has very much to do with the new government and their very ambitious investment bill – $1 trillion over five years,” Grundströmer said.

The money is mostly earmarked for India’s under-funded infrastructure, which will have a direct impact on the trucking industry, predicts the head of Scania, who runs the company’s manufacturing plant near Bangalore in southern India. Grundströmer believes India’s economy will head back to growth levels of 7-8%, up from around 5% now. He also notes that the mining industry, a big customer of India’s truck-makers, is now back up to speed again after a slump caused by government disputes over the illegality of certain sites.

India’s trucks are on the move once more, Kaushik reports. According to IHS data, freight rates are improving 3-4% every month and fleet utilisation is now at 70% compared to 50-60% for 2013. With the future looking brighter, makers are starting to become more optimistic about sales figures. Grundströmer estimates that the total market for heavy vehicles, including buses, will hover around 130,000-140,000 units in 2014, and reckons it will climb to 300,000 in the next five to ten years. “In a good year, Europe is 300,000. You will see the same pattern here in India,” he comments.

Further ahead, he eyes up China’s 700,000-unit market, noting that India has a similarly sized population. India is already huge in buses, with Grundströmer reckoning that this year’s 35,000 total will rise to 50,000 in a good year. IHS is similarly bullish, estimating that the total M&HCV market will touch 570,000 by 2020, with production at 640,000.

A shift towards quality
India’s truck market is still dominated by local players, but new regulations are starting to shift the advantage more towards those foreign makers eager to pry customers away from Tata and Ashok. Tata noted in its 2013-14 company report it had taken an impressive 54% of the whole CV market, including M&HCV, but this was down from 60% the year before. In the pure M&HCV market, Ashok took just over a quarter all sales.

“We don’t see any significant gain here for new players until at least 2020”
– Amit Kaushik, IHS AutomotiveThe vast majority of Tata and Ashok’s truck sales are basic models of long-standing design, but the simplicity and cheapness of those trucks is being threatened by new emissions regulations that will move from Euro 3 to Euro 4, first in cities next year, then countrywide from 2017. Beyond that, Euro 5 will arrive in 2022. As Ashok noted in its report: “this will result in in higher investment and product cost”. The truck market already has to comply with new legislation to fit ABS (anti-lock) brakes. “All this is slowly pushing up the India truck market,” says Grundströmer.

He rates the competition as A,B,C or D in terms of quality, with D being almost home-built trucks. He believes this entry-level market is being killed by new regulations, which are now concentrating the competition within the B and C segments. In the A-segment sit Scania and Volvo, the “premium” players, and Grundströmer fully admits that Scania is not competing with the likes of Tata and its rivals.

“The best local truck is a Tata Prima, that has a price of some 4-4.5m rupees ($64,000-72,000). A Scania is more than double that. If you think a typical truck costs 2m rupees, then we are four times the price,” he states. Scania sells on cost of ownership instead, he says, taking into account the trucks’ better fuel economy and higher residuals.

Tata’s Prima, which went on sale last year, was developed with its Korean arm, the Tata Daewoo Commercial Vehicle Company (TDCV) and is described by Tata as a “world truck with performance standards similar to those in developed markets”. It is a reply to direct competition from Mercedes-Benz, which started building sub-premium large and medium trucks in 2012 under the BharatBenz brand at its plant near Chennai; it is now India’s fourth-biggest truck-maker. The Wall Street Journal reported in September last year that BharatBenz has sold more than 10,000 trucks since 2012, taking a 4.6% share of the truck market.

BharatBenz is reaching down into Tata’s territory along with Volvo-Eicher, a joint venture named VE Commercial Vehicles that pairs the Swedish brand with local firm Eicher to build trucks under the Eicher brand, plus engines for local use and export for Volvo. But Tata and Ashok remain formidable opponents, according to Kaushik. “The two top dominant players have earned a great customer loyalty coupled with great reach and competitiveness, so challenging these capabilities won’t be easy for any new players,” he said. “We don’t see any significant gain here for new players until at least 2020.”

Competition from China
Another challenger will be Chinese truck-maker Foton, which is currently building a $400m greenfield factory near Volkswagen’s car plant in Chakan, Pune. The plant is likely to become operational next year, although observers say the company does not yet have the dealer structure to fully challenge the market. Foreign makers are increasingly localising their production. After beginning with kit production in 2013, Scania is sourcing from India more and more, moving from what Grundströmer describes as "easy things", such as tyres, wheels and batteries, to cabs, fuel tanks and side and cross-members. The company also builds bodies for its new Metrolink coach in India, plus 20% of its chassis. “By localising in India, our experience is that we can reduce costs levels 30-50%,” says Grundströmer. 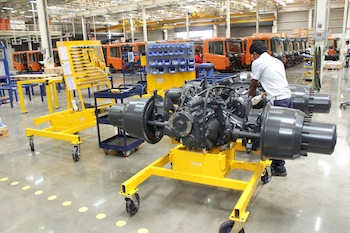 Volvo-Eicher’s factory in Pithampur, Madhya Pradesh, builds engines both for use in Volvo trucks made in France, where they are brought up to Euro 6 emissions standards, and also for the Eicher-branded trucks. Meanwhile, BharatBenz says it can now boast 85% localisation for the trucks made at its 400-acre site in Chennai.

Scania currently has no plans to localise engine production, which currently takes place in Sweden. “You have to be very careful when localising the driveline – for us it is the heart and soul of the truck,” Grundströmer says, although he admits there are CV engine component-makers such as Cummins that are working well in India.

With increased localisation of suppliers comes more local R&D, too. The head of Volvo Buses in India, VRV Sriprasad, told Autocar India in October that the company had set up a test track and installed a team of 60 in Bangalore. Scania is also increasing its R&D activities, while BharatBenz has a centre at its Chennai plant complete with test track including a “bump track with 40,832 cobble stones”, according to its website.

The desire of many Indian makers is both to satisfy the local market and to export. SIAM reports that CV exports were up by over 16% in the second quarter of 2014. Daimler has said it wants to double BharatBenz exports next year, after targeting 500 exports of medium trucks based on the Mitsubishi Fuso platform, not just to surrounding countries but South-East Asia and Africa. Tata exported more than 40,000 CVs in the 12 months ending March 2014, and saw M&HCV exports rise by 34%, helped by shipments to right-hand-drive African markets such as South Africa, Kenya and Tanzania. Scania is another maker looking beyond the so-called SAARC countries surrounding India, with Grundströmer mentioning South-East Asia, the Middle East and Africa as possible destinations.

But it is India which is really going to supply the growth, and that is already on its way; IHS expects the M&HCV market to expand by 13% next year. After a rocky couple of years, truck-makers are anticipating a future of supplying the brawn to help fulfil the new prime minister's promise to repair the country’s battered infrastructure.