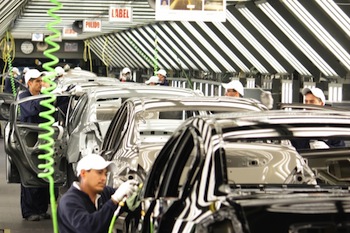 Andrew Williams looks at examples of renewable energy sources being adopted by OEMs, the type of technology used to generate power and the emissions reduction results

Nissan Mexico
An innovative energy project has recently been completed by Nissan Mexico at its Aguascalientes 1 manufacturing plant, which generates power from two separate renewable sources – wind and biogas. As explained by Marco Antonio Ribera, senior environment and energy manager at Nissan Mexico, this initiative forms part of the company's ongoing global environmental action plan, known as the 'Nissan Green Program'. This is made up of four strategic areas, including the reduction of the carbon footprint throughout the lifecycle of all materials across all manufacturing operations.

As part of this programme, the company has also implemented a range of what Ribera calls “green and sustainable initiatives” at other manufacturing sites across Mexico, including at the CIVAC plant, where an Environmental Education Centre has been set up to review and establish the plans of action to improve environmental performance, and in Morelos, where Nissan donated trees to a government reforestation programme that ran from 2008 to 2012.

However, for Ribera, the renewable energy projects at the Aguascalientes plant are the “best examples of the direct application of the Nissan Green Program”, not least because the combined output of the two major biogas and wind power facilities, which are connected to the Nissan site but located outside it, together provided 50% of the total energy requirements of the plant during 2013.

The biogas power plant was established first, and has been generating power since January 2012. Ribera says the process consists of the extraction of methane from a local city landfill, followed by its collection and preparation for use as fuel. Another key part of the scheme was the construction of a new, dedicated 4.2km electric line to transfer the energy which is produced, feeding the electricity network at the manufacturing site.

The wind power project began operating one year later, collecting energy from a wind farm about 1,000km away in Oaxaca. The wind farm consists of 35 turbines that are also used to generate energy for the Mexican national electricity network, although Ribera says that Nissan receives 75% of the total energy produced.

The energy from these two projects is used to supply all the various manufacturing processes at the site, and Ribera confirms that during 2013 a total of 187,000 vehicles were assembled using renewable energy, making it the “top global manufacturing facility of Nissan worldwide to achieve this landmark”.

The Aguascalientes 1 plant also recycles all of its wastewater and solid waste, and Ribero is keen to stress that the adoption of renewable energy has helped the company to achieve a “significant reduction” in CO2 emissions, and avoid burning 16.8m tonnes of diesel.

"On average, 30.6m trees are needed to absorb the impact of CO2 emissions that would have been caused by burning the fuel," says Ribera.

"Nissan has many examples of renewable energy adoption globally, from a local wind power plant in the UK to [solar] photovoltaic plants in Spain, USA and many sites in Japan,” Ribera adds. “What is remarkable in the Mexican case is that it is the only site to produce energy from waste and source wind power in high volume [above] 50% for a major manufacturing site like the Aguascalientes 1 plant."

Seat
As part its ongoing environment commitment, Seat completed an ambitious scheme towards the end of 2013 which involved the commissioning of six solar photovoltaic plants at its Martorell manufacturing site in Spain that together produce 15m kWh per year of clean electricity.

For this ‘Seat al Sol’ project, the company installed 53,000 solar PV panels over a total area of 276,000 sq. m, including the roofs of workshops and temporary storage areas for finished vehicles. Reaching a combined nominal power of 10.6mW (12mWp), it is now “the world’s biggest photovoltaic plant in the automotive industry”, according to project manager Javier Bigas, who heads up Seat’s 'Ecomotive factory' initiative.

"Seat al Sol forms part of Seat Ecomotive Factory, a big project with several goals, among them reducing the CO2 footprint in our factory by 25% by 2018, in line with the Volkswagen Group," adds Bigas. 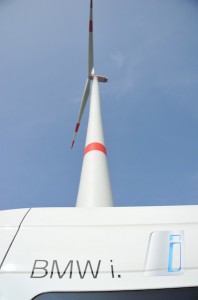 BMW
Another successful European project, although on a smaller scale than the Seat initiative, is the wind turbine installation at the BMW Leipzig plant. For several years, the company has used this facility to produce its X1 model, as well as the 5-door 1 Series, including the coupé and convertible variations.

In 2011, the carmaker also began a limited production run of a test fleet of BMW ActiveE electric vehicles – a fully electric car based on the 1 Series. Following the successful completion of the initial run, 2013 saw the commencement of serial production of the i3 at Leipzig, BMW’s vision of future mobility with its alternative drivetrain and innovative lightweight body. As BMW communications manager, Jochen Müller, explains, a key element of the company's ongoing sustainability strategy is to use sustainable energy to produce sustainable electric cars, and “not just shift CO2 emissions from the road to the factory”.

"The amount of energy we get out of these four wind turbines is more than we additionally need to produce the BMWi cars in the Leipzig plant. The energy does not leave the plant to [go to] the public grid. It stays in the plant," he says. The four Nordex wind turbines, installed in July 2013, have a combined total power output of 10mW helping to produce around 26GWh of electricity per year, an amount that BMW says is “more than is required for the future production of electric cars”.

In total, the wind turbines account for approximately 20% of the overall power requirement at the plant, meaning that the power generated is diverted for use in other production lines whenever the manufacture of electric vehicles is momentarily halted.

In order to meet LEED requirements, Volkswagen realised that it needed to generate at least 12.5% of the energy consumed at the plant from on-site renewable energy sources and so worked with US company Silicon Ranch to develop an appropriate strategy for setting up a solar PV installation at the site. 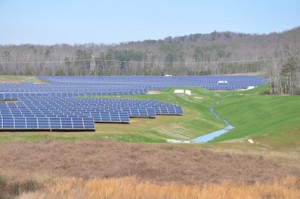 "In the case of VW, Silicon Ranch is the owner and operator of the solar farm and sells the generated electricity to VW,” says Matt Kisber, president and CEO of Silicon Ranch. “Our VW solar farm is the largest, privately owned and operated solar farm in Tennessee and the first, large-scale 'behind the meter’ solar farm in the seven-state Tennessee Valley Authority service territory."

"The solar farm uses photovoltaic solar panels and the energy is fed into VW’s electricity distribution system via their substation that provides electricity to their entire manufacturing campus," states Kisber.