Under a new “Change” strategy, Renault is reorganising its manufacturing footprint and model allocation 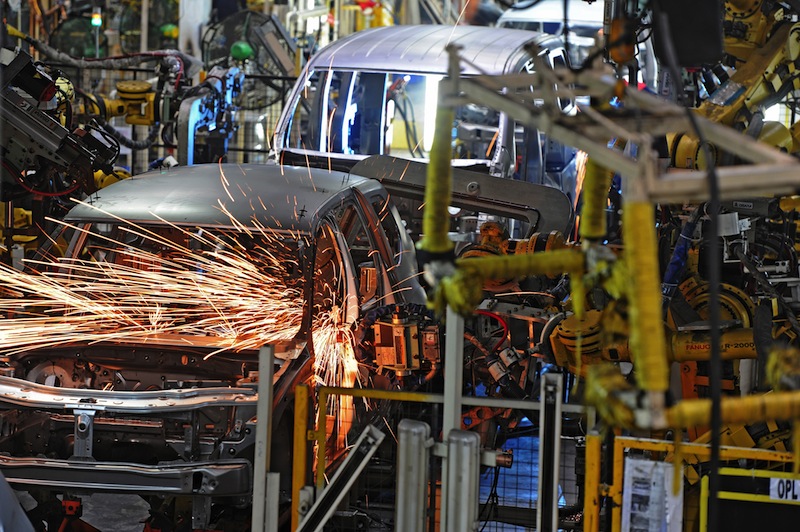 Since 1999, Renault has worked closely with Nissan in the Renault-Nissan Alliance. This co-operation has been immensely beneficial to Renault, giving the company access to a wide range of suppliers and platform technologies and, in recent times, scale benefits from shared production facilities. Leaving aside specific activities within the Renault-Nissan Alliance, this article examines recent developments at Renault and the Romanian arm of the Renault group, Dacia.

Renault’s current strategy goes by the strap-line “Drive The Change”; when announcing its financial results for 2013, Renault set out a number of new objectives as well as re-assessing progress to date. Despite the difficult economic circumstances of recent years, Renault claims it has exceeded its original 2011-2013 objectives, when Drive The Change was launched, including delivering €2.5 billion in cumulative free cash flow. The new targets set for 2017 are to generate €50 billion in consolidated turnover and to achieve an operating margin greater than 5% of turnover, with a positive free cash flow each year.

With ongoing changes to its manufacturing footprint and model allocation in Europe, Renault claims the new strategy will ultimately boost its European capacity utilisation rate to 100%, based on two shifts per day. Such an achievement would represent a substantial turnaround from Renault’s recent experience in Europe, where single sift production has been commonplace.

Renewal & expansion
In order to rebuild its market position and recover past losses, the last few years have seen Renault – and Dacia – embark on a significant model renewal and expansion programme. This has seen a number of important changes in the Renault production network within Europe in particular. At the heart of the model renewal programme has been the introduction of the new Clio and its sister model, the Captur. The launch of the new Clio has been accompanied by a significant shift in production, with most of the new model made in Turkey rather than in France (where some production remains, to placate the unions and government).

The new Clio has achieved first place in its segment in France, which was perhaps to be expected, but also third place in the segment in Europe, where it competes against the Volkswagen Polo, Ford Fiesta, Opel Corsa plus other French models, namely the Peugeot 208 and Citroen C3. Meanwhile, the Spanish-made B-segment crossover model, Captur, has become the segment leader in both France and Europe. A Samsung-badged version of this model is expected to be made in Spain for export to Korea.

Although Renault has managed to avoid closing a production facility in France – unlike PSA, which has closed Aulnay near Paris – the carmaker has had to reorganise its production footprint and model allocation extensively in recent times. When the Flins factory, also near Paris, lost much of the Clio production to Turkey, Renault hoped that its Zoe electric car would be produced in sufficient volumes to compensate at least partly. This has not happened.

However, Renault has not switched significant Clio production volume back to France; instead it has secured production of the next Nissan Micra for the Flins factory, albeit not until 2016/7. Production will shift to France from India. When this change was confirmed, a production target of 82,000 units per year was announced, but reports have since suggested that this could be increased to 120,000 units.

Reshuffling European production
Later this year, Renault’s Sandouville factory in north-west France will start production of the new Trafic van, replacing production at the Nissan plant in Barcelona and the GM van plant in Luton, England. Sandouville will also make a small number of vehicles for Opel/Vauxhall, primarily the high-roof versions which cannot be made in Luton because of height restrictions in the paintshop; Luton will continue as the main production location for the Opel/Vauxhall versions of the Trafic. 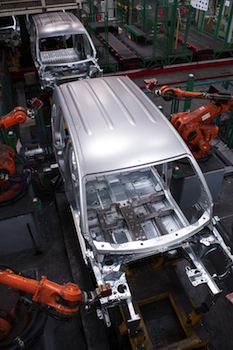 Switching the manufacture of the Trafic to Sandouville coincides with the rundown in production there of the Laguna and Espace; their replacement models will be made at the Renault plant in Douai, France, which has hitherto focused on the Scenic and Grand Scenic MPVs. The Laguna and Espace that are due from 2015 will be made on the new CMF-C/D platform which also underpins the Nissan Qashqai.

Completing the manufacturing picture in France, Renault also has two van plants: at Maubeuge it makes the Kangoo and a Mercedes version, the Citan; and at Batilly it makes a large van, the Renault Master, along with the Opel/Vauxhall version, the Movano, and the Nissan version, the NV400 (formerly the Interstar).

Elsewhere in Europe, Renault has two facilities in Spain: at Valladolid, where its makes the Captur referred to earlier, along with the Twizy EV; and at Palencia, where Megane production is concentrated.

In Turkey, Oyak-Renault (in which Renault owns a 51% stake) makes most of the Clio output; this plant produces not just the current Clio hatchback, but also the previous model and a sedan version, sold in various markets under the Thalia and Symbol badges. Production of the Fluence, a sedan version of the Megane, also takes place in Turkey. Manufacture of the electric Fluence was short-lived and stopped after the collapse of the Better Place venture which planned to sell it in Israel and Denmark in particular.

Completing Renault’s manufacturing footprint in Europe, the carmaker also operates the sole vehicle plant in Slovenia, where it makes the Twingo (previously the Wind roadster and some versions of the Clio were made there as well). This plant will soon start producing a four-seater Smart model based on the Twingo, both vehicles coming off a new platform co-developed with Daimler.

Developing Dacia
However, much of the recent development within Renault has actually focused on Dacia, which has seen a remarkable rise in its fortunes following the global success of the Logan, Sandero and Duster models. The increasing profile of Dacia has not just led to a number of interesting developments in terms of vehicle production but has also had a direct impact on Renault’s sales position worldwide.

With the integration of Dacia and the expansion of its product line-up, the Renault group has increased its market presence outside Europe. The proportion of non-European sales increased from 38% in 2010 to 50% in 2013. Moreover, Brazil and Russia have now become the second and third largest geographic markets for the company, after France. This changing global picture has been led by the Dacia Duster, which was the company’s bestselling model worldwide in 2013.

Dacia’s home for many years has been Romania, where it made close to 334,000 vehicles in 2013, compared to nearly 260,000 in 2012. Outside Romania, Dacia production also takes place in Russia, where it made nearly 188,000 Dacias in 2013; a further 250,000 were made in Brazil; around 10,000 at Nissan in South Africa; 70,000 in a joint Alliance plant in India; and 71,000 in Colombia. Renault itself also produced around 188,000 vehicles in Argentina in 2013. Dacias made in India are sold under the Renault brand and some Duster SUVs are also sold as Nissan Terranos, although this arrangement will stop when the next model changeover takes place. 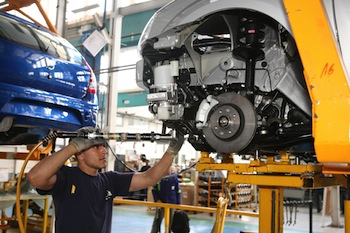 However, the most significant development at Dacia recently has been the opening of a new plant in Morocco in 2012. Renault has had a small plant, Somaca, in Morocco for many years but this has largely supplied the local market, apart from low-volume exports to other North African countries.

Lack of capacity at Dacia in Romania, along with rising costs and labour disputes there, led the group to look for another low-cost production location close to Europe: Morocco. But specifically a site within the tax-free zone just outside Tangiers. This enables Renault-Dacia to make vehicles in Morocco and ship them the short distance across the Mediterranean into the EU without having to pay any import duties.

Therefore, to all intents and purposes, the vehicles coming out of the Tangiers plant are European – and indeed EU, Turkey and other nearby markets are where these vehicles will be sold.

The Tangiers plant made just over 101,000 Dacias in 2013 but is on track to see production climb steadily to 340,000, and possibly 400,000, by the end of the decade if not before, with production supported by a number of major international suppliers that have moved to Morocco to set up just-in-time (JIT) supply lines into the plant. These suppliers include JCI, SNOP and Yazaki. The first models made at Tangiers were the Dacia Lodgy MPV and Dokker van; these have now been joined by the new Dacia Logan and Sandero. It has also been suggested that Nissan-badged vehicles could be made at the plant, but any timescale remains unconfirmed.

Spreading launches worldwide
Back in Europe, Renault will continue with the model renewal programmes referred to above. Following the new Clio, 2014 will see the launch of the new Twingo (made in Slovenia) and Trafic van (made in France). These will be followed in 2015 and beyond by the successors of the Espace, Megane, Scenic and a new D-segment sedan (the replacement for the Laguna), which will all share the new Renault-Nissan Alliance CMF C-D platform that Renault expects will ultimately produce as many as 3m vehicles a year. Renault will also add further crossover vehicles, the details and locations for which have yet to be confirmed – although some will be made in China – plus an A-segment entry vehicle designed for India and South America, and new pick-up trucks for emerging markets.

These model launches will not just occur in Europe; in fact, their launches are intended to help the group achieve more than 8% market share in Brazil and Russia and a 5% share in India. Renault has come relatively late to the game in terms of vehicle production in China, but it has formed an alliance with Dongfeng there and this will see the construction of a new plant in Wuhan with an initial capacity of 150,000 units, designed to produce C and D-segment SUV crossovers from 2016 onwards 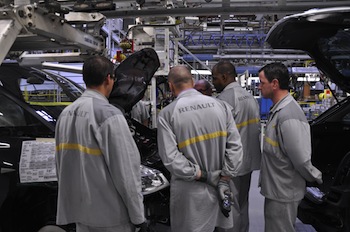 Renault’s expansion into new production locations is partly in response to general global trends, but also a reaction to the recent loss of business in Iran. International trade sanctions led to Renault stopping the sale of car kits in 2013 – it shipped nearly 65,000 kits to Iran in 2012, resulting in the production last year of just 3,000 Renaults and 30,000 Dacias. PSA has also lost significant business in the country, having sold kits for the 206 and other models to Iran in recent years. Unsurprisingly, Renault and PSA have both said they are willing to re-enter the Iranian market once sanctions are lifted.

Away from the manufacturing operations themselves, the big question at Renault concerns the successor to its CEO, Carlos Ghosn. There is no doubt that Ghosn, the creator of the Renault-Nissan Alliance and the leading light at both companies, will be missed when he steps down as predicted in the next few years. Despite bringing the two companies close together through the Alliance –­­ with cross-shareholdings, a joint production network, common purchasing systems, co-developed platforms and a combined takeover of AvtoVAZ in Russia ­– Ghosn’s vision for the two companies involves separate leadership in the future.

Ghosn said in January 2014 that he only took on both roles because there was no alternative. What having separate CEOs will mean for Renault­­ ­– and Nissan – in the future remains to be seen. There are undoubted benefits associated with the existence of the Alliance and the co-operation of recent years, but having different leaders may well be necessary to ensure that the two carmakers retain and indeed further develop their own identities going forward.