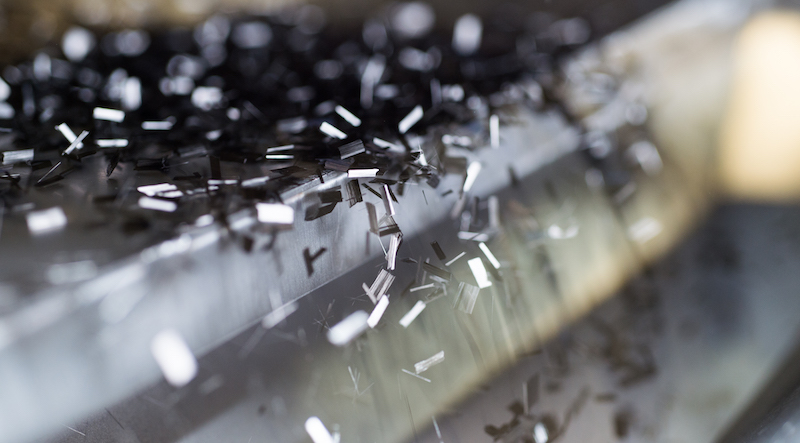 European Union (EU) end-of-life vehicle directives prescribe that 85% of the materials used in a new car have to be recyclable. Carbon fibres are expensive, and according to lifecycle assessments (LCAs) their production has a significantly higher impact on the environment than competitor materials such as steel and aluminium. Recycling routes for these metals are well established, whereas methods for recycling carbon fibres have only become commercially viable very recently.

This is both a colossal waste and a missed opportunity. Recycled carbon fibres are almost half the price of virgin fibres, have a significantly lower global warming potential and demonstrate much the same mechanical properties.

The managing director of carbon fibre recycler ELG Carbon Fibre, Frazer Barnes, says: “The automotive industry requires carbon fibre costs of $5-7 per pound if the material is to play a broader role than it does currently in light weighting. Whilst there are several initiatives around low-cost carbon fibre, the reality is that only recycled carbon fibres can meet this target today.”

BMW is currently the only carmaker to be using carbon fibre-reinforced plastics (CFRPs) in anything approaching high volumes – the material is used extensively in its i models and to a lesser extent in its 7 Series. As such, it is also the only carmaker currently using a closed-loop process for recycling dry carbon fibres at scale, and is using the resultant secondary fibres in three ways.

Speaking at this year's JEC World, BMW vehicle concept project manager Stephan Huber said: "Many people think that sustainability and carbon fibre do not really fit together, BMW thinks that they do. There is not a contradiction."

BMW sources its carbon fibre from SGL Automotive Carbon Fibers (ACF) of Moses Lake, Washington, USA, a company it set-up in partnership with carbon fibre manufacturer SGL Group. These carbon fibres – produced entirely using hydropower – are bundled into rovings or heavy tows and wound-on before being sent to ACF's second site at the Wackersdorf Innovation Park in Germany for processing into carbon fibre preforms. These preforms are then shipped to BMW's production plants in Landshut and Leipzig.

Scrap carbon fibre left over from the cutting processes at these two plants is sent back to ACF Wackersdorf, where it is then cut into chips and opened into individual fibres.

Huber continues: "Some people call it scrap, we call it really good material to work with."

Textile machinery cards these single fibres until they are aligned in one direction, creating a nonwoven complex, which is then stacked in layers with a variety of orientations – depending on the mechanical properties required for a given component – before being stitched together.

The non-woven complex can then be impregnated with resin and is particularly suitable for the production of flat parts, such as the roof for the i3. Indeed, secondary material already accounts for around 10% of the carbon fibre used in this vehicle.

The OEM has also developed a method for incorporating secondary fibres into sheet moulding compounds (SMCs), which are being used for structural components in the 7 Series.

Further, and perhaps most significantly, BMW is using secondary fibres in thermoplastic granulates for injection moulding applications, and is starting to employ these materials in the manufacture of parts for vehicles produced by its other brands—such as the centre console carrier for the current Mini Clubman.

This part was previously produced using a polyamide (PA) reinforced with glass fibres at a loading of 30% by weight. Working with thermoplastics specialist Akro-Plastic and interiors manufacturer Grammer, the carrier is now made from a PA reinforced with scrap carbon fibres from the i models at a loading of 10% by weight. The part is not only 15% lighter that its glass fibre-reinforced counterpart, it is also significantly stronger and stiffer. Crucially, it can be produced using the same injection moulding equipment for the same price– a win-win situation, according to Huber.

BMW is able to produce these granulates from a variety of thermoplastic resins, and plans to use them in intake silencers, engine covers, clutch pedals and bearing blocks in future.

Huber concludes: "This is just the beginning. We will roll out a whole range of secondary carbon fibre components this year and in the coming years."

The recycling of carbon fibres impregnated with resin presents an entirely different challenge to recycling dry fibres. The vast majority of CFRPs are made using thermoset matrices such as epoxy that cannot be melted or reshaped after they are cured.

ELG Carbon fibre is one of a number of companies using a process called pyrolysis to recycle impregnated carbon fibres. At its plant in the UK, the company sorts and chops up CFRP scrap that is then heated to 400–600°C in an inert atmosphere, burning off the resin. ELG says that its patented technology yields clean carbon fibres.

Using these fibres, the company has developed a number of products suitable for automotive applications that include: a short fibre product; nonwoven mats that can be used individually or in conjunction with virgin carbon fibres in SMCs, and are suitable for producing closures such as bonnets, boot lids and tailgates, spare wheel wells, and ultimately structural applications; nonwoven mats manufactured from recycled carbon fibres blended with thermoplastic fibres, which can be compression moulded to produce interior components.

Barnes says: “In like-for-like products, such as injection moulding compounds or nonwoven mats, the properties are the same, but the cost of the fibre is typically 40% lower. In comparison with other forms of carbon fibre, such as unidirectional prepreg, the properties are of course different—the important factor is to use the right material in the right place.”

In 2015, ELG produced some 1040 tonnes of carbon fibre products. The materials have been used in Gordon Murray Design's CFRP-intensive iStream Carbon chassis, which formed the basis of Yamaha’s two-seater Sports Ride concept vehicle introduced at the 2015 Tokyo Motor Show.

Barnes continues: “The key barriers [to the use of recycled carbon fibre], as with any new material, are establishing test data and demonstrating performance in prototypes. We’ve established a number of projects to address these issues, and we now have sufficient information to allow the materials to be selected for new production programmes.”

ELG is now planning to build two new plants – one in Germany and one in the USA.

Pyrolysis is viable for recycling CFRP manufacturing waste, but the process is not without its issues; it is energy intensive and can leave char residue on the surface of carbon fibres, hampering further processing. The recycling of end-of-life waste is also problematic.

Perhaps in the long term the answer is to design CFRPs to be recycled in the first place.

Thermoplastics can be re-melted and reformed, and their use is poised to increase. Further, researchers at the Georgia Institute of Technology (GT) have found that vitrimer-based epoxies can be dissolved in ethylene glycol (EG) at elevated temperatures.

A postdoctoral researcher at GT, Kai Yu, says: “Vitrimers contain dynamic bonds that can alternate their structure without losing network integrity under certain conditions. We let [EG], which has small molecules, to participate in the network of alternating reactions, which effectively dissolved the vitrimer.” 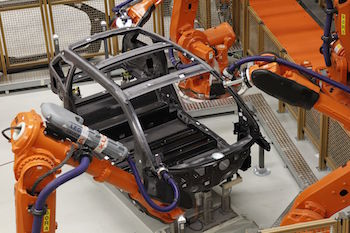 Non-woven complex, resin-impregnated, is particularly suitable for the production of flat parts, such as the roof for the BMW i3

Once dissolved, the undamaged carbon fibre fabrics can be reused while the EG can be evaporated and the epoxy reformed. The lead researcher on the project, professor Jerry Qi, says: "The vitrimer-based thermosetting polymers are a new group of polymers and are actively pursued in recent years. We hope that the fundamental research from academia can expedite the broad applications of these materials in industry."

A similar recycling approach to that developed by GT is currently being championed by Connora Technologies Inc.

Connora says that composites manufactured with its polyamine-based Recyclamine curing agents are fully recyclable: both the epoxy matrix and the reinforcement can be separated, recovered and re-used, using a low-energy solution-based recycling process. The reinforcements recovered using this process demonstrate near-virgin properties.

In January 2014, Connora and Adesso Advanced Materials announced a formal partnership to accelerate the delivery of the Recyclamine technology. Adesso's technologies are very similar to those of Connora.

The Chinese company’s epoxies – the Recycloset range – and Cleavamine degradable curing agents can be dissolved from reinforced plastics using a solvent. This can be done at atmospheric pressure at temperatures of 120-160°C.

Speaking at the time of the partnership announcement, the chief technology officer (CTO) of Connora, Stefan Pastine, said: “Both Connora and Adesso realized early on that the problem [of recycling thermoset composite waste] will be much bigger than any one company can tackle alone. We need to develop not just a single technology or chemistry, but rather an entire eco-system of parties willing to build a new industry around thermoset recycling.”