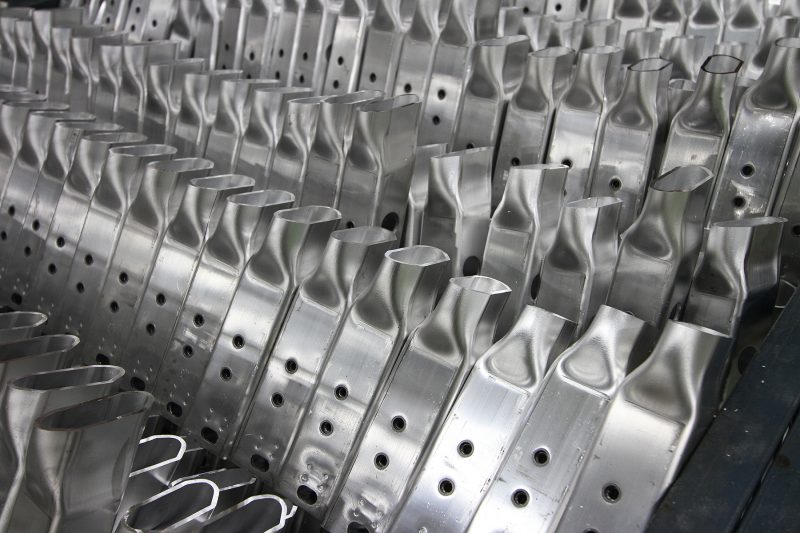 A report from the independent market analysis company CRU suggests that aluminium usage in electrified vehicles will near 10m tonnes by 2030, marking an increase in demand of ten-fold from 2017. As well as vehicle electrification, fuel economy targets are causing carmakers to turn to materials such as aluminium in order to save weight. Companies such as Constellium are looking to take advantage of these trends, and are currently witnessing growing demand in their solutions for the automotive industry.

This rise in demand is reflected in the fact that Constellium has recently opened two new facilities: one in San Luis Potosi, Mexico, and the other in Georgia, the US. We visited the latter in order to get an understanding of current and future demand for the company’s products, as well as the processes used to make these solutions.

“Here at White, Georgia we produce crash management systems for the BMW X3 and X4, and we’re launching the X5 and X6 vehicles in the summer,” plant manager Bryan James told AMS. “We are also starting a new product here that is one of our premier items – the longitudinal. It’s the first time we’ve made it in the North America region. So all this makes for a big opportunity for us.”

Back in May 2017, Constellium said that it was supplying BMW with aluminium for use in the doors, roofs, fenders, deck lids and various structural parts of the new 5 Series. It also revealed that it was providing the OEM with a rear crash management system, with the extruded bumper beam and crash boxes made from its high-strength 6000-series crushable alloys.

The term “crash management system” is used to describe the structural module consisting of the bumpers and the related attachments which connect to the longitudinal beam of a car. For Constellium’s system, the front bumper is mounted directly to the longitudinal.

“We make the crash boxes here, and then we assemble them together with the bumper beams before shipping the system off to BMW,” James explained. “We have bend forming, stretch forming, and some laser operations for cutting out some of the holes and details. We also have some welding at the end of the line to weld the tow lug into the crash box, which is a unique Constellium innovation, and also to weld the crash boxes to the beams.”

The towing function requires both stiffness and strength from the entire system. It eliminates the need for a separate tow bar that has typically been attached to a vehicle’s rear bumper.

The fact that Constellium assembles several parts together instead of shipping individual components off to its OEM customer makes operations at the White plant distinctive, James continued. This allows the company to ensure each component in the system is optimised and performs exactly how it is designed to do so.

He also explained that this approach is necessary in order to adhere to BMW’s just-in-time supply chain and production strategy.

“We only have a four-day window for being able to ship to BMW,” James revealed. “Carmakers generally don’t want to have a big bulk warehouse and internal supply chain loops from the warehouse to the lot, so our pre-assembled parts go directly to the assembly line docks and are then installed on the vehicles.”

The plant operates for five days a week and runs ten-hour shifts. The target for each shift is 650 crash management systems, but if an item is used twice in one system, such as a crash box, the output is doubled to 1,300. As well as having to make double the amount of certain parts to keep on top of orders, James noted that some parts are more difficult to make than others and can therefore take more time.

The upper beam, for example, includes an upper crash box with the tow lug. “The tow lug needs to be fitted, so there is more complicated processing, which means it takes more time to make that crash box than the others,” he said. “And each crash box goes through a series of operations, using one of the most complex machines in the plant to install the spacers. These also act as a support, so when the box is bolted down by the customer into the frame, there is a rigid surface to work with.”

Behind the scenes is another interesting part of operations at the White plant, found in a separate room that sits next to the assembly area. It is here that Constellium carries out testing of components using two systems: a co-ordinate measuring machine (CMM), and a new laser scanner.

To use the latter, a specialist technician places a part on a stand, which is surrounded by reflectors. Infrared beams are then sent from two cameras to the reflectors, which send a signal back to allow a computer to identify where the table is and where the part is. A hand-held tool is waved over the part to create a 3D simulation on the computer. 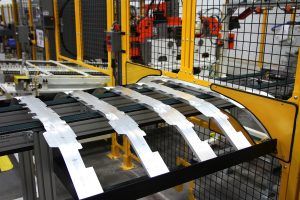 “The signal from the reflectors gives us points of reference for measurements so we can put in the car body coordinates and make sure the part is going to work when it gets to the customer,” John Miller, quality technician at Constellium, explained to AMS. “Our plant here was the first in the Constellium network to adopt the technology, and it is now used in all our North America plants.”

The primary benefit of using the laser scanner instead of having the CMM is speed, he continued. Obtaining results using the CMM often takes several hours, potentially even days, but Constellium is able to obtain the data it needs with the scanner in a matter of minutes.

The scanner is also designed to be mobile, so Constellium could take it to customers and demonstrate how the technology works. It is also versatile, and could be used to help adapt a fixture used in production processes, for example.

Despite this, Miller acknowledged the fact that the CMM is still useful. “We still do CMM because it is ever so slightly more accurate, and then we often compare the results we have from the laser scanner,” he stated. “But it’s just not as frequent because the laser is telling us what we need to know.”

Looking ahead, James is bullish about Constellium’s position in the market, and also its location with the new plant in White. He expects demand for the company’s solutions in the automotive space to rise.

“I think what we’ve found with BMW, as a lot of their design is happening in Germany, we are global suppliers. So we have design operations in Germany, and here in the US in Michigan. When you’re working with a plant that is remote like this one, it’s a partnership between everyone from Germany and the US, where design and testing has been done before the program goes ahead here. So we do have a close relationship with them.”