Pressing ahead at Volvo

Volvo Car’s new transfer line is the latest interpretation of so-called classical manufacturing. AMS talks with Jonas Knutsson about the technologies that make it possible

Alist of the attributes of a classical manufacturing ‘transfer line’ reads like a litany of everything that modern manufacturing practice has sought to abolish from the factory floor. These include: custom-built machine tools for operations including drilling, milling and boring; dedicated fixturing; difficulty (bordering on impossibility) for retooling; on–line parts storage; and overall efficiency moving sharply downwards as the number of stations on a line is increased.

Yet as a complete manufacturing system suitable for an environment where the parts involved were marked by uniformity of design, consistency of materials and high volume, the concept was perfectly valid.

Conversely, at a time when the overriding requirements for automotive manufacturing put an emphasis on such factors as flexibility, minimal inventory and ease of reprogramming and reuse, the transfer line looks like a solution to yesterday’s problems. Instead, so the mantra goes, parts manufacturing today is based on highly-flexible, cellular production in which discrete configurations of production equipment – machine tools, robots and associated material-movement equipment – offers capabilities that can be reprogrammed quickly and easily. 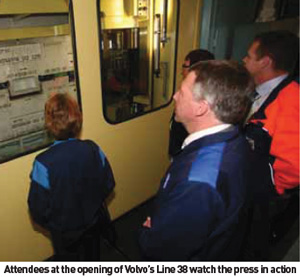 Flying in the face of progress, some aspects of the old transfer line approach are bound to live on in any manufacturing environment, the processes still being sequential, requiring particular equipment configurations to produced specific parts. Advances cannot remove the fact that they still demand dedicated tooling and a materials handling system to move workpieces from one operation to the next. The reality is that the challenge involved in the design and operation of any new manufacturing line will be that of integrating those inevitable manufacturing constraints with the equally inevitable business demands for the flexibility associated with the cellular approach.

New take on an old idea

That much is evident in one of the newest manufacturing lines in operation in the European or indeed global automotive industry, Line 38 at Volvo Car’s Olofstrom, Sweden production site. The facility, which went into operation in September last year (with final acceptance taking place as recently as December), is not strictly speaking a classical transfer line. It is, according to Volvo’s Communications Manager Jonas Knutsson, who is based at Olofstrom, “a hydraulic tandem press line”.

The facility, which is being used to manufacture as many as ten different body-in-white parts for the new XC60 model (including left-hand and right-hand variants), was designed by German automation specialist Müller Weingarten. The produced parts include door inners and outers, wheel wells, A-pillar supports and bonnets.

Although the production technology used on the line is highly specific, closer analysis reveals that the underlying design concept is very much a reinvention of established, sequential, piece-part manufacturing procedures tailored to suit modern requirements.

At first sight, the line’s most obvious features are its dimensions and the pressing forces it can apply. The whole installation is 80m long and 21m wide. In sequence it includes a die storage area, a destacker, five presses, each with four beds measuring 5x2.80m, and an end-of-line handling area. The first of the presses can exert a force of up to 3,200 metric tons, with each of the four succeeding presses capable of exerting half that initial force.

Knutsson confirms that the extremely high force exerted by the first press in the line is “roughly three times more” than the industry norm. He explains that it is the exceptionally hard steels that require this degree of metal forming potential, not least to meet increasingly stringent demands for crash resistance in completed vehicles. The line demonstrates built-in flexibility in being able to also handle relatively soft metals, such as the aluminium used to form bonnets. 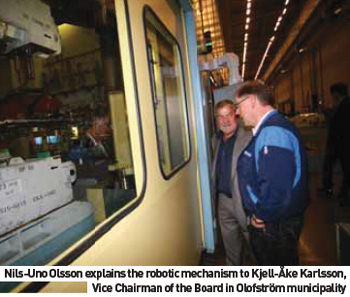 In operation, it is the first press that forms the part, with each of the succeeding four carrying out finishing operations. Each of the presses, explains Knutsson, contains four parallel dies, enabling simultaneous pressing of four parts. Nor do those parts have to be identical – it is feasible that one press can produce the inner and outer panels for a set of matching left- and right-hand doors. The maximum individual part weight that can be handled, including the associated gripper, is 100kg.

The materials handling on the line, and specifically the innovative method by which parts are transferred from press to press, is down to the online robotics. This inter-press automation is achieved by means of five ABB 7600 robots, all of which are positioned along the downstream side of the presses. The machines have a ‘seventh axis’, which is in effect an extended reach, enabling the robot arm to stretch across the full width of each press to access all dies simultaneously, allowing the robots’ suction grippers to remove all four parts and transfer them to the appropriate dies in the next press.

Knutsson is convinced that this is a unique capability. “Nothing like this has been seen before,” he states, though he adds that the idea for this approach came from Müller Weingarten and not from within Volvo. Not withstanding, Knutsson adds that about dozen of Volvo’s own staff were closely involved in the actual building of the line, to ensure an in-depth familiarity with the facility, effectively creating an in-house resource.

Clearly, speed - and increased productivity – are the advantages of such an operation. With an overall stroke rate per die of ten per minute, the installation can produce 40 parts per minute. The stroke rate is in of itself unusual. As Knutsson points out: “Hydraulic presses are usually slower than their mechanical counterparts, but in this case, the stroke rate is equivalent to a mechanical press line.”

But the factor that contributes most dramatically to the line’s productivity is the speed of die change procedures. All 20 dies can be in use at any one time – four in each press – and in just a few months of operation, Volvo is already approaching its target time of just three minutes to change all the dies on the line, compared to a time of between 20 and 30 minutes for older-generation machines. According to Knutsson, this quite remarkable achievement can be traced to a number of factors. These include the innovative die storage facility at the start of the line, rapid transportation of dies to the line, a co-ordinated process for the removal of dies in use and insertion of the new sets, plus automated tool change for the robots and appropriate lineside preparation.

The die storage facility offers space for the stacking of five dies, itself a highly unusual arrangement, but which provides sufficient volume to store dies for three different, concurrent projects. The dies are transported from the storage area to the line by means of what Knutsson describes as “automated sledges”, AGVs which position themselves at the side of the press for which they are intended without any interruption to existing operations. Once production is halted to allow for changeover, the new dies are slid in as those used for the preceding operations are slid out. While this is taking place, the robots undergo an automated tool changing routine to equip them with the correct parts-handling attachments. A supplementary heavy-duty materials handling capability is provided by an overhead crane system.

Knutsson stresses the importance of this rapid changeover capability to Volvo’s broader manufacturing profile. “We are a company that does relatively small batch sizes,” he explains.

“In fact, this facility allows us to manufacture very small batches and still make these economically viable.”

The high level of automation on the line is reflected in the low number of workers manning the presses. Knutsson says that the operation requires just one ‘line driver’, plus four other shop floor workers positioned at the end of the line where the completed parts are transferred to conveyors.

Currently the line operates over two shifts, five days a week. Unsurprisingly, Knutsson indicates that Volvo is extremely satisfied with the installation. “The whole system has been designed to deliver lean and flexible production,” he states. Evidently it does, as Knutsson concludes: “All the alternative ways of achieving these objectives would have been much more expensive.”