Turning over a new Leaf

At Nissan's Smyrna plant, assembly stations are being employed that can meet the particular demands that the Leaf's new version poses while doubling up to also serve ICE vehicles lines 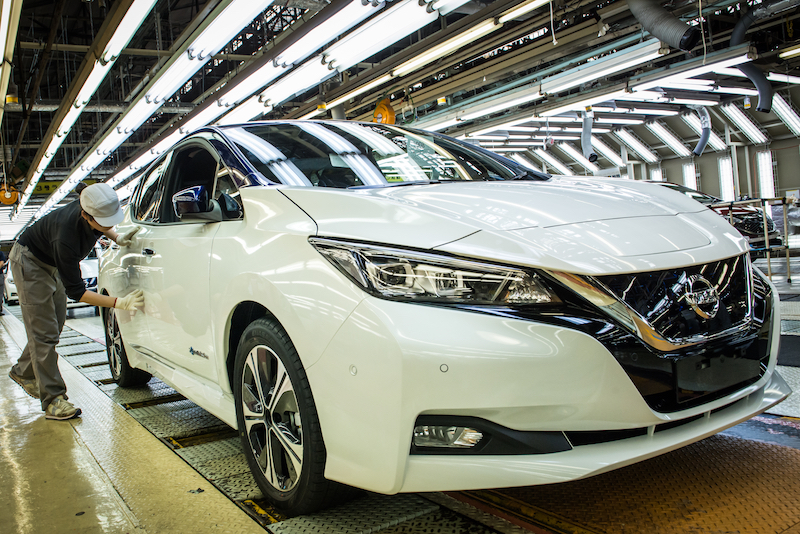 Until the early 1980s the US State of Tennessee simply did not register on any atlas recording places in the world where car manufacturing was a major industry. That changed in 1983 when Nissan first started operations at Smyrna, located southeast of Nashville. Since opening, the plant has grown to become a 5.9m sq.ft facility employing over 8,000 people and representing a total investment of US$6.4 billion. With an output capacity of 640,000 vehicles, Nissan says that it was the largest volume car production plant in North America during 2016.

Six vehicles are currently produced at the plant. Five of them are internal combustion engine (ICE) models: the Pathfinder, Rogue, Infiniti QX60, Altima and Maxima.

The sixth, however, is Nissan’s Leaf electric vehicle (EV), which first went into production at Smyrna in 2013 – three years after the OEM started making the model at its Oppama plant in Yokosuka, Japan. The car also entered production at the company’s Sunderland in the UK during 2013. That car was the first version of the Leaf, 111,400 of which had been sold in the US by late last year. It has now been superseded by the 2018 version, which is produced at the same three sites where the first version was made. In the case of Smyrna, production of the new version started last December.

Sharing is caring The new Leaf boasts several innovations compared to its predecessor. These include Nissan’s ProPILOT Assist technology to help drivers cope with stop-start traffic conditions and an e-Pedal, which controls both acceleration and braking. The car can also clock up 150 miles on a single charge thanks to an updated battery pack. But as with the first version, production of the new Leaf at Smyrna is not carried out in isolation from that of its ICE counterparts, but is closely integrated.

There are two separate production lines at Smyrna. One is devoted to the Pathfinder, Rogue and Infiniti SUVs, while the other serves assembly of the Altima and Maxima sedans. This second line has also taken on the 2018 Leaf, as it did for the initial version. Despite the fundamental difference in propulsion systems of the vehicles made on that second line, all of them are built to order without any batching of vehicle models and maximum common use of both technical and human resources. This assessment is provided by Ryan Fulkerson, new model engineering director at Nissan Smyrna. “It is a very similar process to build,” he confirms.

However, there are some unavoidable differences between the production demands involving the two distinct types of vehicle. Fulkerson identifies three obvious factors: “There is a battery to install as well as the e-powertrain, but no fuel tank and fuel lines.” As he explains, the tactic Nissan has employed to cope with these differences and minimise any possible discontinuities to the smooth flow of the line has been to design a number of assembly stations that can both meet the particular demands that EVs pose and also double up to serve ICE vehicles as well.

In the case of the batteries, the task of installing the packs is performed by dedicated automated handling equipment before they are fixed in place manually by lineside personnel. But in order to facilitate balanced flows down the line, the same stations are also used to carry out assembly tasks on the Altima and Maxima. “That stage is not solely dedicated to Leaf vehicles,” Fulkerson confirms. “Some chassis work for the Altima and Maxima is also carried out there.”

Although the essential processes of Leaf production have remained unaltered, the introduction of the new version has required an upgrade to the handling equipment to cope with the fact that the battery pack is now significantly heavier. As Fulkerson explains, this approach has important implications for the effective utilisation of people and, as a direct consequence, overall plant costs. The specific point is that the operators at the station are trained in tasks for the Leaf, Altima and Maxima vehicles, and it is therefore irrelevant to them which type of vehicle arrives at the station. “If we only had people there to handle the Leaf it would be a real cost burden for the whole plant,” he states.

The same principle applies for the installation of the e-motor used in the Leaf – operation takes place at the same station at which ICEs for the Altima and Maxima are installed. In both cases, Fulkerson confirms, the power units are installed from below using exactly the same handling equipment. One important difference is that the motors are easier to install due to their compact design. “You have a lot more space for it,” he observes. The approach is maintained even at a third station where the most safety-critical assembly procedure specific to the Leaf is carried out – the connection of the battery pack to the e-motor.

There is, however, one exception to this otherwise consistent trend, which involves the testing of the coating applied to the battery pack housing. As Fulkerson points out, an essential failsafe requirement for the on-road occupant safety of the Leaf is that the housing should be completely waterproof. “You can imagine the danger if water got in there,” he emphasises. As such, a post-coating pressure testing of the battery pack housing is carried out to ensure watertight integrity.

Speaking the same languageAlthough there are some specific challenges unique to the assembly of the Leaf, the procedures are replicated across the three Leaf production sites around the world. Fulkerson confirms that this provided the opportunity for combined training beforehand, and then for continuing collaborative information sharing once production had started. Every vehicle is “built up and taken apart again” numerous times before real production starts, he states, but in the case of the new Leaf, a key factor that differentiated the way that preparatory work took place was that a great deal of it “happened in Japan.”

This involved “cross-functional” representatives of all three plants where the Leaf is built. People from Oppama, Smyrna and Sunderland all collaborated to train each other and to identify solutions to what Fulkerson terms “workability” problems – in other words, any potential inefficiencies in assembly procedures that might occur at any of the plants. The personnel involved comprised representatives of “engineering, manufacturing, management and manufacturing technicians”. Many of these workers were in Japan at different times over a three-month period prior to actual manufacturing of the car starting at any of the locations. Subsequently, assembly operations in Smyrna and Sunderland started within a few days of each other, though those in Japan got underway a couple of months previously.

The three-way cooperation still continues in the form of a weekly online “global quality meeting” chaired by a project manager in Japan, Fulkerson adds. Each of these lasts for about two hours and involves manufacturing and engineering team members from the three plants where the vehicles are made. The same is true, he admits, for other “global vehicles” such as the Rogue, though not for those made only in one country such as the Maxima.

Fulkerson also concedes that this global networking of manufacturing support is probably “enhanced” as far as the Leaf is concerned. One reason is simply that the various people in the different locations became particularly used to working closely with each other as a result of the way the respective production launch dates were compressed into a narrow timescale despite their geographical dispersion. Another is that the nature of the Leaf raises “electrical issues” that simply would not occur with an ICE vehicle, and for which the exploitation of a global knowledge base is an appropriate remedial tactic. “There are some unique problems that come up from the Leaf due to the e-powertrain,” he confirms. Therefore, the intense involvement of “electrical engineers” in these meetings “almost makes it a particular global activity for them and is something that is unique about the Leaf.”