The vehicle electrification craze is showing no signs of slowdown. OEMs are unveiling more and more emobility models at glitzy events, and governments all over the world are establishing laws that will eventually push the internal combustion engine to the margins.

As a result, powertrain suppliers are setting aside substantial investments in the development and production of electrified components. 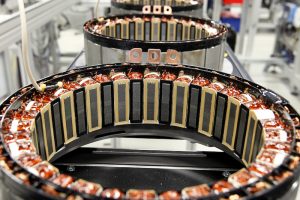 Bosch is now the sole owner of EM-motive, which makes electric motors from its plant in Germany

Bosch has taken full control of EM-motive – one of the largest electric-motor manufacturers in Europe. Founded in 2011, the company started as a 50/50 joint venture between Bosch and Daimler. It has since made around 450,000 electric motors at its production facility located in Hildesheim, Germany.

“For Bosch, the complete acquisition of EM-motive is the next logical step on the path to becoming the market leader for electromobility,” explained Stefan Hartung, member of the board of management of Bosch and chairman of its mobility solutions business sector. “It’s a chance to establish an even broader presence in the market.”

EM-motive lists Daimler, Porsche, Fiat, Volvo and Peugeot among its customers. Bosch wants to attract new business for its electric motors in the near future.

As well as targeting the passenger vehicle market, Bosch is hoping to bring electrified solutions to commercial vehicles. The company has readied two versions of its eCityTruck powertrain for mass production by integrating multiple components, like the electric motor and power electronics, into a single unit. This reduces the total number of parts needed, making the powertrain more efficient, more affordable and easier to build.

The German supplier is also working with Nikola Motor Company – a US start-up based in Phoenix, Arizona – that is developing heavy-duty trucks that run off hydrogen. The two companies are working together to design a new electric powertrain with greater range. Bosch hopes to be producing these soon after 2020.

Denso has recently announced that it will invest approximately 180 billion yen (US$1.6bn) over the next three years – from FY2018 to late FY2020 – on the development and production of electrified automotive products, systems and technologies.

“Denso is committed to advancing automotive innovation and anticipating the changing needs of our customers in the transportation industry,” commented Yukihiro Shinohara, senior executive officer of Denso. “Electric vehicles are increasingly becoming the norm throughout the world, and to meet the rising global demand for automotive electrification technologies and products, Denso will strengthen its ability to develop and produce them.”

The money will be used to construct a new ‘Electrification Innovation Center’ at the company’s plant in Anjo, Japan. This will house research and development activities, including the development and testing of prototypes. However, the supplier also hopes to use as a base to launch newly developed products.

Additionally, Denso and Toyota will consolidate their electronic component business. As a result, Toyota’s plant in Hirose, Japan will be transferred to Denso in April 2020. According to the supplier, this facility is equipped with “superior production lines,” which it hopes to roll out across its manufacturing plants worldwide. 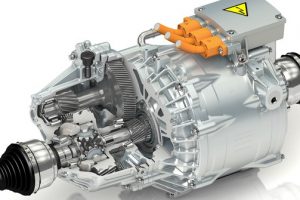 GKN produces its e-axle at plants in Bruneck, Italy and Tochigi, Japan

GKN has been developing its eDrive technology since 2002, and currently supplies systems for the likes of BMW, Mitsubishi, Porsche and Volvo. It has recently witnessed growing demand for its products, with the order book for its electrified drivelines increasing to £3bn (US$3.93bn) in 2018, marking a rise of 40% compared to the previous year.

The company recently unveiled the world’s first battery electric vehicle with a two-speed transmission and torque vectoring, which is currently undergoing extensive testing at its facility in Arjeplog, Sweden. The demonstration vehicle, which is based on the Jeep Renegade, is equipped with GKN’s e-axle system which is made in Bruneck, Italy and Tochigi, Japan.

To keep up with demand, the supplier is soon set to open a second facility in Japan. Located in Tokoname City, construction of the plant began in September 2017, and was positioned in order to cater for local Japanese OEMs.

ZF has been a champion of electric propulsion systems for years. It is now upping its game, with a particular focus on China.

The company has announced that it will be making its latest 8-speed 8HP automatic transmission at its Shanghai plant, including a variant designed specifically for hybrid passenger vehicles. Similarly, it is set to start production of the TraXon automatic and hybrid commercial vehicle transmission at another facility south of Shanghai as part of a joint venture with commercial vehicle manufacturer Foton.

“Our strategy for the Chinese automotive market is called ‘local for local’,” stated ZF board member Holger Klein, responsible for the Asia-Pacific region. “Almost all of our customers will expand their business in China in the coming years. We will support them in this by offering our entire portfolio locally - from development services to local just-in-sequence delivery. We will increase our degree of localisation in China up to 100% in the coming years. With our innovations and high-tech products, we will have an even stronger presence in the future.”

As for long term plans, ZF has stated that it is “striving to produce purely electric drives in China; production facilities for this are currently under way.” It is unclear, though, whether or not the company is adapting existing facilities or building new ones.