Key to the performance of an electric vehicle (EV) is its battery technology. Mike Farish looks at some of the latest developments to improve energy storage 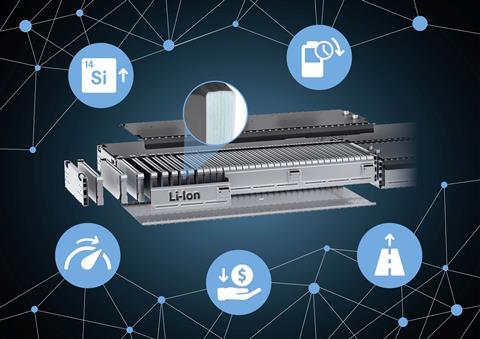 One of the characteristics of the emerging EV landscape is that of major, established automotive companies whose experience is in the design and assembly of vehicles using internal combustion engines (ICE) looking to tap into the expertise of newer, specialist outfits with a specific focus on developing enhanced battery capabilities.

One recent example involves German car maker Daimler and Sila Nanotechnologies, a US company based in Alameda, California, that was formed in 2011. In April this year the car maker took a minority stake in the newcomer as part of a group of investors that put $170m into the battery specialist to support its continuing R&D work.

What Sila Nano has to offer is the potential to increase in the storage capacity of lithium-ion batteries, that almost invariably power EVs, by some 20%, with no increase in their volume or weight. That figure is verified by founder and CEO of Sila Nano Gene Berdichevsky, who previously worked in battery development for US EV maker Tesla. The chemistry of the battery technology the company is developing “demonstrates up to 20% improvement today, with the potential to reach further improvements over state of the art traditional Li-ion,” he states. To achieve this the company says it has found a way to replace the graphite materials hitherto used to create the anodes of lithium ion batteries with counterparts based on silicon. Specifically, says Berdichevsky, it has developed a “silicon composite material that is able to store energy at a much greater density than graphite.” 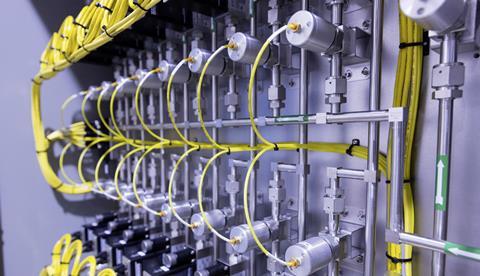 “The specific composition is not pure silicon,” Berdichevsky confirms, though details of the precise chemical composition involved remain proprietary. But what this use of silicon with another material in a composite formulation achieves, he says, a solution to a fundamental problem that has so far inhibited silicon’s use in lithium ion batteries despite the massive performance improvement potential it holds. “Silicon is extremely good at storing the lithium that is the key charge carrier in the batteries,” he explains. “But when you put lithium into silicon the combined resulting alloy expands about three times in volume.”

That means that if the silicon materials available so far were to be used to fashion anodes for lithium ion batteries then they would expand and contract accordingly every time they were charged and then discharged during use. The consequence, as Berdichevsky notes, would be that “the anode would become a moving part that would pretty quickly destroy itself.”

The solution that Sila Nano is offering is a powder composed of individual particles that embody a composite structure that allows their silicon content to expand as it receives lithium ions without the overall size of the particles themselves increasing except fractionally. Hence when the powder is used to form anodes for use in lithium ion batteries they can receive much greater charge than graphite counterparts with no or maybe just possibly minuscule alteration to the geometry of the complete component part. The slight cautionary note is because, as Berdichevsky also concedes, “right now it isn’t perfect but the particle already compensates internally for most of that expansion.”

The small degree of part expansion that does occur at the moment is, Berdichevsky adds, roughly comparable with the degree of distortion that might be encountered with an existing type of graphite anode. “At the battery level they are about the same,” he states. “So we can already achieve a similar cycle life.” Essentially, therefore, the current state of Sila Nano’s silicon composite technology is that it can achieve much greater charge capacity than graphite counterparts with comparable physical distortion characteristics. Getting to that point, Berdichevsky says, has required he company to develop its own materials processing procedures and some “35,000 iterations”. But he also stresses that though Sila Nano’s own product is unprecedented, its own raw material requirements are easily available. “We have ensured that even in research we have used only commodities that are available at global scale,” he confirms.

Actual market launch of the technology is projected for some time next year though initially only for batteries used in electronic devices. The reason for that, Berdichevsky stresses, is simply a matter of “scale” and the availability of production resources. “The amount of nano material required for a cellphone is about ten thousand times less than for an electric vehicle,” he explains. “But there is no difference in principle between those types of application. Anywhere you can use a lithium-ion battery today using graphite you will be able to use lithium-ion batteries in the future using our material.” 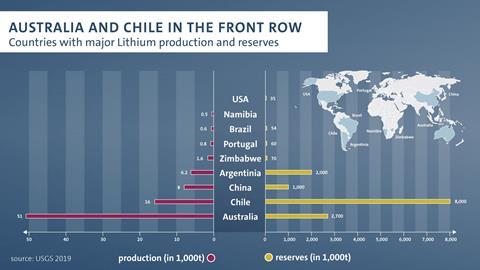 That ease of application has another important implication. As Berdichevsky explains though the technology Sila Nano is developing will make possible a massive difference to the capabilities of lithium-ion batteries it does not require a new type of battery design or of production facilities. So, it will be possible to retrofit into existing battery designs and manufacturing operations. “A big difference between us and some other developing battery technologies is that we can integrate very easily into existing battery factories,” he confirms.

Berdichevsky stresses this point. Converting a production line making lithium-ion batteries with graphite anodes to one capable of producing ones made Sila Nano’s silicon composite material would be a matter of “fine tuning” some existing processes. “It would not require any investment in new production equipment,” he states unequivocally. He does concede, though, that a slight change in the internal configuration of the battery would be required given the greater number of ions that would flow from the anode to the cathode during a usage cycle between recharges. “You would have to cast the anode a bit thinner and the cathode a bit thicker,” he concedes, though he describes what would be necessary as just a “rebalancing”.

How far ahead the appearance of the technology in on-the-road vehicles might be remains unclear but the implication of Berdichevsky’s comments is that it could certainly be feasible within just a few years. When that does occur Sila Nano’s role will be as material and technology supplier. “We have no intention of becoming a battery manufacturer,” he states.

So the company will work with automotive OEMs to refine the technology to reflect their particular requirements. Apart from Daimler Sila Nano also has a close relationship with BMW but Berdichevsky is adamant that there is no question of them or any other car maker having some sort of monopoly on the use of the technology. In any case given that Sila Nano will at that point in effect be a Tier 2 supplier, battery makers will still be an intermediary between them and automotive OEMs. But car makers that work with Sila Nano in the development phase of the material are likely to be the ones that are “first to the market” with the technology and will benefit from in-depth knowledge of its capabilities – capabilities that they can to some extent influence because, as Berdichevsky points out, the particles that constitute the final material will still be an “engineered product”. 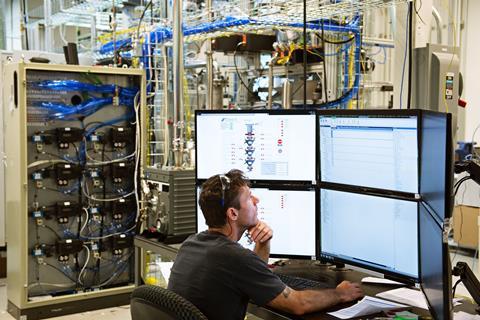 Meanwhile further to the East in Louisville, Colorado, is another young US company is exploring new ways of enhancing the basic chemistry of lithium-ion batteries that has also attracted the interest and cash of a major European car maker. This is Forge Nano, again less than a decade old and which attracted a $10m investment in January this year from Volkswagen. As Forge Nano’s founder and CEO Paul Lichty explains the company is looking to bring to further commercial use a nano scale technology first pioneered at research level in Russia back in the 1960s and that has some applications at the moment in the production of semi-conductors and flat panel displays.

This is atomic layer deposition (ALD), formally described as a ‘gas phase chemical process’ that can form impermeable surface coatings only an atom in thickness on target objects. Coatings that can be applied include inorganic materials such as metals, oxides, sulphides, nitrides, phosphates fluorides, selenides and tellurides, as well as organic polymers and hybrid inorganic/organic mixtures. Lichty says that the company is seeking to develop a means of applying the technique to powders “at high throughput and low cost”.

Specifically, Lichty continues, this should allow two key parameters to be satisfied. The first is that it enables the coating to be applied “as a uniform monolayer in which one atom is put round an entire particle.” The second is that there is precise “control of the thickness which allows you to shut off reactions you don’t want but still allow those you do want.” Lichty indicates that for automotive battery applications the technique has been tried out not just for “most currently available anode and cathode materials” but also for one of the more adventurous experimental types of material currently under development that for “solid electrolytes”. The aim has been to explore how ALD could benefit “any interface within that electro-chemical system that could benefit from fine-tuned surface treatment.” Anode materials investigated so far include those based on graphite and silicon and for cathodes those based on nickel cobalt aluminium (NCA), nickel manganese cobalt (NMC) and lithium cobalt oxide (LCO) materials.

What such coatings can then achieve, explains Lichty, is a “more robust material” that can significantly enhance battery performance. He says, for instance, that it may then be possible “to increase voltage to get a higher energy density, get more cycles out of the material and achieve a dramatic increase in the lifetime under fast charge.” There may also be enhanced safety because the “reactivity window” is narrowed to a specific ion input rate that should help avert some of the “thermal runaways” that can occur otherwise. On the key performance parameter of energy storage capacity, he says that ALD treatment of existing battery types might achieve increases in the range 15-20% depending on usage patterns. Fast charge cycle capability with “a 15-minute charge time for full depth of discharge” should be increased by a factor of ten.

Lichty is reticent about the details of the EV-related battery research the company is exploring but one that he does reveal is an exploration of the use of aluminium oxide to coat the graphite particles used for anode applications. He says that thicknesses of “less than two nanometres” perhaps about 20 atoms in depth have been involved. Obviously when those particles are subsequently formed into a part the ALD coating becomes a pervasive constituent of the material.

So far there are no cars on the road powered by batteries that have utilised the technique but again without providing further details Lichty says there are a number of projects “worldwide” involving more than one OEM where it is “part of the development timeline”. At a testing level he confirms that batteries containing ALD-treated materials have been created “up to 40 amp hours in size”, which he observes is “a pretty substantial automotive-focussed battery size”. He adds that in that instance “we got feedback that there was improvement in the energy density, lifetime and safety,” though he adds that all the key parameters including fast charge “have been validated” in automotive-related testing at one time or another.

Importantly also Lichty says that the ALD process can easily be integrated with existing battery chemistries and production facilities. “It is a very drop-in ready process,” he states. “We can easily snap on to the front of an existing line.” Indeed, he continues, there should also be production benefits “in terms of flow and consistency” with consequent improvements in throughput and reject rates as well as in final product performance.