As the move to electrified and autonomous vehicles accelerates, Toyota is expanding in both technology areas and restructuring its operations. Ian Henry reports

Toyota is making a number of key organisational changes to simplify and rationalise its operations in response to the fast-changing automotive market. As of the end of 2017, the company had 16 vehicle and major component plants in Japan, and 51 facilities in 28 countries around the world. We take a look at the main recent investments and changes to the carmaker’s existing structure and organisation across the world.

In Japan, the company’s main manufacturing network is very stable with no new plants opened in recent years, and no all-new full factories expected. However, Toyota is making some key changes to its existing operations, especially in the area of hydrogen vehicles and electrified vehicle technologies.

• Time for an upgrade

• A bigger bet on BEVs

For example, it is increasing the use of hydrogen in the production process as well as developing hydrogen-fuelled vehicles. The vehicle-maker has introduced 20 new fuel-cell-powered forklifts at its Motomachi factory, in addition to the two vehicles it had been trialling since early 2017. However, this is just the start, with Toyota planning to use between 170-180 fuel cell-powered forklifts at Motomachi by 2020, as well as using them at other Toyota factories around the world, subject to hydrogen fuel stations being installed. These are seen as a key element in meeting the ‘Plant Zero CO2 Emissions Challenge’ that Toyota has introduced at all its factories worldwide.

It is also increasing output of road-going fuel-cell vehicles from around 3,000 a year today to at least 30,000 a year by 2020. To allow for this, Toyota has announced two new facilities, one for its fuel cell stack production, the other for high pressure hydrogen tanks. Fuel cell stack production will take place in Honsha City, on a site close to the company’s first car plant, which opened in 1938. Hydrogen tanks, meanwhile, will be made on a new line at Shimoyama; these new tanks will be made of thick carbon fibre and have been designed to withstand major crash impacts.

In Japan, Toyota is also rationalising and simplifying its electronics business. This will involve some consolidation of activities between Toyota and Denso (Toyota’s in-house electronics component operation). This will see Denso taking on leadership for most of the electronics business within Toyota, in particular the transfer of production of electronic parts from Toyota’s Hirose plant to a Denso factory by the end of 2019, and by 2022, mass production of electronic components will be concentrated within Denso on a global basis.

In the sales arena, Toyota has decided to consolidate all its activities in Africa within Toyota Tsusho (a Japanese trading house in which Toyota holds around one third of the shares). These moves should all be seen as part of a policy of structural simplification across the whole of the Toyota group. Earlier moves in this process of organisational streamlining have included making Daihatsu a wholly-owned subsidiary of Toyota and forming a joint venture with Mazda, called EV CA Spirit, to develop electric vehicle technologies.

In a significant move outside vehicle production, Toyota has announced the development of a new magnet for electric motors, which will reduce the use of certain rare earth elements by up to 50%; specifically, this involved a global first, a heat resistant magnet with reduced neodymium, as well using no terbium (Tb) or dysprosium (Dy) which had hitherto been seen as critical materials for heat-resistant neodymium magnets. This development is seen by Toyota as overcoming a potentially significant production problem owing to limited resources of neodymium, much of which is understood to be located in conflict zones, or other challenging locations. These are expected to be in use in the early 2020s.

Toyota produces vehicles in the UK, France, Turkey and at a joint-venture plant with PSA in the Czech Republic. It also has engine and transmission plants in Poland, as well as engine facilities in the UK and France. In Russia it makes the Camry large car and RAV4 SUV for the local market, and there is a low volume assembly factory for utility versions of the Landcruiser SUV in Portugal.

Two of the carmaker’s European vehicle plants have been subject to significant investment announcements recently. In March 2018, Toyota officially confirmed what was widely known in the industry, namely that the next Auris would be made in the UK on the TNGA-C platform. This will be the culmination of an investment of £240m ($306m) in the factory. Production will actually start at the end of 2018, a few months earlier than had been expected. The new Auris will feature a 1.2-litre petrol engine (imported from Poland) along with two hybrid engines with 1.8-litre and 2.0-litre engines made in Deeside, Wales. The Auris will, moreover, have no diesel engine option, in line with Toyota’s general policy to drop diesel powertrains from its passenger car range – excepting large SUVs.

The announcement confirming the new Auris for the UK plant had been long expected but had also been delayed owing to the continued uncertainty regarding Brexit. Although this is yet far from resolved, Toyota had in reality made the decision some time earlier and was simply waiting for an appropriate moment to make the formal announcement; in the end, the 2018 Geneva Motor Show was chosen. However, the success of this programme will be heavily determined by the nature of the Brexit deal – with around 85% of output from Burnaston destined for the EU, selling these vehicles on WTO terms, with a 10% tariff and other non-tariff related costs on top, will be tough; and the challenge will be rendered even tougher as the Auris operates in a segment that is diminishing as consumers switch increasingly to crossovers such as the CHR, which Toyota makes in Turkey.

A few weeks before this announcement was made, in January 2018, Toyota announced a significant investment in France. Here €300m ($342m) will be invested to make the next Yaris and derivatives on the TNGA-B platform. Some 300 new permanent jobs will be added this year and a further 400 new jobs will be added full capacity reached, i.e. around 300,000 units a year. As well as the hatchback Yaris, a small SUV is expected to be added to production in France in the early 2020s.

In November 2017, Toyota also announced an investment of 400m zlotys ($113m) in Poland to build a new line for making 1.5-litre petrol engines for hybrid vehicles. This will come on stream in 2020 at Toyota’s existing engine plant in Jelcz-Laskowice. Also in Poland, Toyota has a manual transmissions plant in Walbrzych.

In India, Toyota has decided to develop its business in partnership with Suzuki; although it has an established operation, in association with local company Kirloskar, Toyota will co-operate with Suzuki to expand in the country – an arrangement based on the cross-supply of technology. It will begin with the Suzuki Baleno and Vitara Brezza being made by Toyota Kirloskar and sold through both Toyota and Suzuki networks; and Toyota delivering a version of the Corolla for sale by Suzuki. Both companies will produce these vehicles in India and they have also committed to source from local suppliers as many components as possible.

The companies first announced they would work together in February 2017 and in November they issued a memorandum of understanding covering the launch of battery electric vehicles for India by 2020. In addition, some of the Suzuki models made by Toyota Kirloskar, and others made by Suzuki, will be supplied from India to various markets in Africa, under both Toyota and Suzuki names, and sold through both companies’ sales networks. Denso will also be involved, working with Toyota to provide Suzuki with technological advice in the design of a compact ultra-high-efficiency powertrain being developed by the latter. 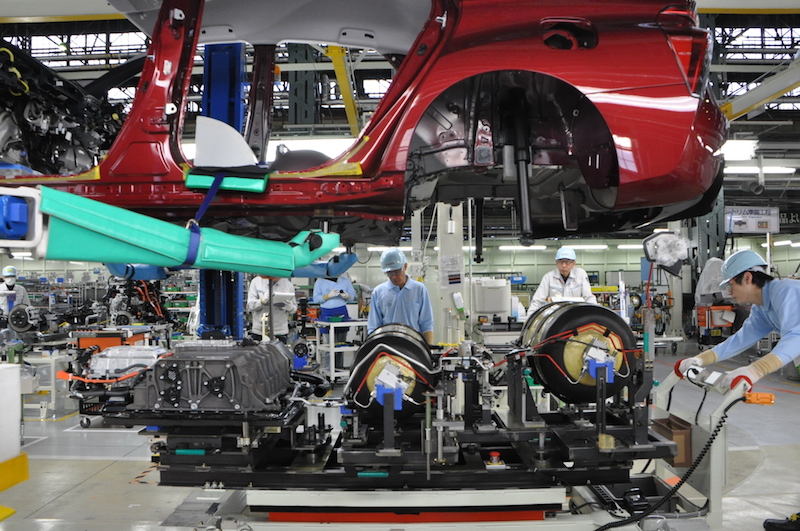 Broadening the electric offering in China

Here Toyota’s focus is on widening its plug-in hybrid and full battery electric vehicle range; PHEV versions of the Corolla and Levin will be launched – and produced – in China in 2019, which will be the first time Toyota has made PHEVs outside Japan. A BEV based on the CHR/IZOA compact SUV will follow in 2020.

Toyota laid the ground for producing EVs in China back in 2015 when it started making transaxles for hybrids in Changshu; it also makes nickel hydride battery modules in China and is increasing capacity at its Sinogy Toyota (40% owned by Toyota) and Corun PEVE (9% owned by Toyota) operations to 220,000 units a year by 2020.

The company is already a major hybrid supplier in the country having sold 140,000 electrified vehicles in China in 2017 (including the locally made Corolla hybrid and Levin hybrid models, as well as the imported Prius).

Toyota is also developing its component production network elsewhere in Asia. It has agreed to Aisin Seiki increasing its stake in Toyota Autoparts Philippines from 34% to 61%, with the latter actually becoming an Aisin subsidiary. This unit makes manual transmissions but will also in invest 1.2 billion Philippines Pisos ($22.5m) in new lines to make automatic transmission components – the plant is already a supply point for manual transmission components for Toyota globally (with the capacity to make 230,000 component sets a year) and will gradually develop a similar capability in automatic systems.

After a period of not investing in the region, Toyota is once again expanding its North American operations. It is building a new plant, with Mazda, in Alabama and committing new cash to several of its existing plants, resulting in a total of $10 billion being scheduled to be invested by Toyota in North America by 2023.

This will include the $170m being ploughed into Blue Springs, Mississippi, which now makes the Corolla sedan on the TNGA-C platform, creating 400 jobs. Some production of the Corolla in Mississippi – and at the new plant in Alabama – will be of volume transferred from Canada, where additional capacity for the RAV4 is required. In addition, the next Corolla hatchback will be imported from outside the US, as volumes for this version have been declining, making local production uneconomic; however, where the imported hatchback will come from (Japan or even the UK, where the same vehicle will be made as the Auris from the end of this year) remains to be seen. The investment in Mississippi will include completely replacing the current assembly lines.

In Canada, $1.1 billion is being invested to upgrade two factories in Ontario, both of which make the RAV4, including a hybrid model, safe-guarding 8,000 jobs and creating another 450 new jobs. In addition, modest sums by comparison are being invested in Georgetown, Kentucky for the next Camry and Avalon, but a much more substantial figure of $1.6 billion is being invested in Alabama in a new joint venture plant to be operated with Mazda, located around 14 miles from Toyota’s existing factory, which makes around 700,000 engines a year.

Capacity is being installed to make 300,000 cars and SUVs a year at the new factory, employing 4,000 staff. Production will be split equally between the Corolla and a Mazda crossover. Producing the Corolla at this plant, rather than in Mexico (where it was due to be made), will allow the Mexican plant to produce 100,000 Tacoma pickups, which its US factory in Texas cannot produce, owing to capacity constraints there. Construction of the new plant will be in 2019, although land preparation works are already underway, with vehicle production starting in 2021.