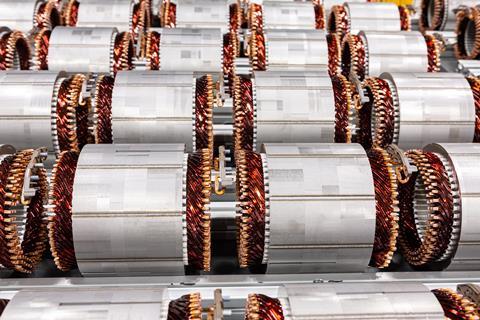 EV motors have just gone into production for the first time at the Bosch Charleston plant.

The announcement comes just as it begins to produce its very first e-motors at the plant after prior investments, making use of floor space previously dedicated to diesel engine component manufacture.

The German company has invested a total of $6 billion to date in electromobility development and by last year its order book for related goods exceeded $10 billion.

The expansion at Charleston will create 350 or more jobs and expand the 200,000 square foot production zone by a further 75,000. The site produces the necessary rotors and stators and completes the motors’ final assembly processes. The expansion is scheduled for completion by the end of 2023.

The Charleston plant, opened in 1974, is Bosch’s largest US plant in head-count terms with 1,500 personnel and 900,000 square feet of floor space in total. Bosch says the plant is distinguished by its high level of automation and use of robotics and artificial intelligence and Industry 4.0 methods to boost efficiency.

“We are in the midst of major shifts in mobility, and the story of reinvention in Charleston is a model for how electrification production can evolve from within an existing facility. We are building on the long-standing expertise and commitment of the Charleston team with this new production,” said Mike Mansuetti, president of Bosch in North America.

“Local production helps to advance our customers’ regional electrification strategies, and further supports the market demand for electrification,” he said.

Separately, Bosch is moving ahead with a previously-announced $200 million investment in fuel cell stack production in another South Carolina facility in Anderson which will commence operations by 2026 and similarly create about 350 new jobs.

Bosch’s electric motor range have capacities between 50 kilowatts to 500 kilowatts with torque of between 150 Nm to 1,000 NM and offer voltages of up to 850, covering the needs of products from passenger cars to commercial vehicles.