Although it started out producing pepper grinders, and then expanded its portfolio to include bicycles, PSA Peugeot Citroën is now Europe’s second largest car manufacturer. The Poissy site just outside Paris is where France’s first ever compact water-based painting process has been installed, and is regualated by an ABB robot.

“Our standard painting process at Poissy involved the application of a protective electrophoresis coating, a sealing mastic, a red-coloured primer which also protects the electrophoresis coating from UV damage, two coats of colour and one varnish, with the car body baked between each stage,” says Philippe Moisan, manager of robotic automation and painting at the plant. “With the introduction of this new compact solution, we’ve cut out the protective primer, but added a hardener to the two-coat colour application stage and baked it for slightly longer to continue to give the same protection.” 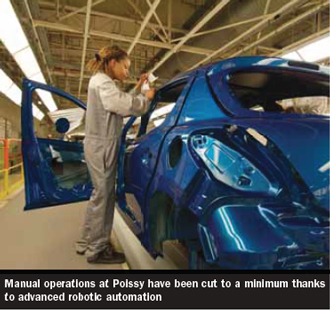 The Poissy plant is one of the group’s most important manufacturing sites for the Peugeot brand, producing 238,000 vehicles in 2010 from the 207 range including station wagon, plus Citroën C3 and DS3.

In the factory, the car bodies are suspended above the ground on a slow-moving conveyor in a ghostly carousel, as they arrive at the paint shop and the sequence of spray booths and ovens. Before being painted, however, they pass through huge rollers covered in ostrich feathers to remove every last speck of dust before the painting begins.

“By removing the primer phase from the process, we’re making significant savings,” says Moisan. “We have one fewer spray booth, one fewer oven to run and any new factories we build can be smaller,” he continues. “Because of the added hardener, the new colour coat costs a little more than the previous paint but we’re saving on the primer, and as the process is spread throughout the company, volumes of scale will bring down the price.” PSA is the first car manufacturer to use this technology in France. 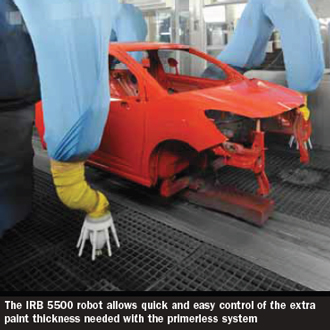 “We chose ABB to supply their IRB 5500 robots because they were the only supplier who could offer a ceiling-mounted solution that could hold a 17kg sensor. The ABB solution was also the only robot fl exible enough to carry out eighteen different spot measurement checks all around the vehicle,” says Philippe Moisan, manager of robotic automation and painting at the PSA Peugeot Citroën plant in Poissy.

The car bodies head through the various spray booths, the first interior layers applied by hand, by men in fully protective suits and face masks moving with careful precision and skilfully applying each layer to the vehicle. Robotic arms covered in protective wrappings of bright blue fabric apply the colour to the cars, dipping their nozzles into the paint reserves for a top-up in a strikingly human-like manner.

“The success of the colour paint stage is critical to our being able to ensure the same quality guarantees on the paintwork as we could with the standard painting process,” Moisan says.

“The new colour paint layer has to be thick enough to ensure the electrophoresis coat is protected from UV rays – any less than 22 microns and the paint could flake and peel.”

Benefits of the solution include:

This is why PSA has added an ABB 5500 robot to each of the three lines to measure the paint’s thickness just after flash off. The robots are fitted with a Phototherm laser sensor which checks 18 points on the car, like a giant robotic doctor carrying out a health check on every body. If the thickness isn’t sufficient, the problem areas are sanded back and the car is sent back through the system to be repainted.

After a very successful pilot, the new compact process went operational in November 2008 and is currently in the ramp-up phase. Although all three paint lines have been fitted with ABB robots and the new system, currently only cars being painted red are getting the new spray job. This will be gradually extended to include other colors and by the end of 2009, every new car produced in Poissy will undergo a compact paint process.

“Once we’ve ensured the success of the system in Poissy, we’ll be extending the process of all of PSA’s other production sites which use water-based paint,” says Moisan, who continues: “With the compact process we can continue to offer the same quality, aspect and shine customers expect from a Peugeot or Citroën, but while making significant cost reductions too, which in the current economic situation can only help.”