Energy on demand for the oven

Of all the vehicle production processes, the paintshop is the largest consumer of energy. So it’s no surprise that manufacturers are looking for closer control of airflows in the drying ovens

Considerable savings on energy were achieved at the Daimler plant at Rastatt following the introduction of the automated intelligent air management system
Considerable savings on gas and electricity are possible, as was the case at Daimler’s Rastatt plant following the introduction of Dürr’s automated, intelligent air-management system.

On the shopfloors of automotive manufacturing plants, countless machines and systems run day after day, night after night. Energy consumption is huge, as are the associated costs, particularly at times when shortages of raw materials are foreseeable; production-related environmental protection edges toward the top of the agenda in the automotive industry.

This is also confirmed by the German Association of the Automotive Industry (VDA) in its report 'Our plants – sustainable car production in Germany', published in September 2014. The automotive industry invests more than €13 billion ($14.3 billion) in Germany annually in order to promote sustainable production. It regularly puts its own energy efficiency to the test and has a keen eye for potential savings.

'Industry 4.0' is the key word – the continued development of conventional production technology toward the 'intelligent factory'. How this could look in practice is demonstrated by the integration of a new software solution for controlling fresh and exhaust airflows at Daimler AG in Rastatt, Germany. The EcoSmart VEC intelligent air-management system from Dürr is fully automated. Since it went into operation, this technology has saved a considerable amount of gas and electricity consumed in the drying process of freshly painted car bodies in the Rastatt plant, despite the retrofitted oven system being used to a very high capacity. 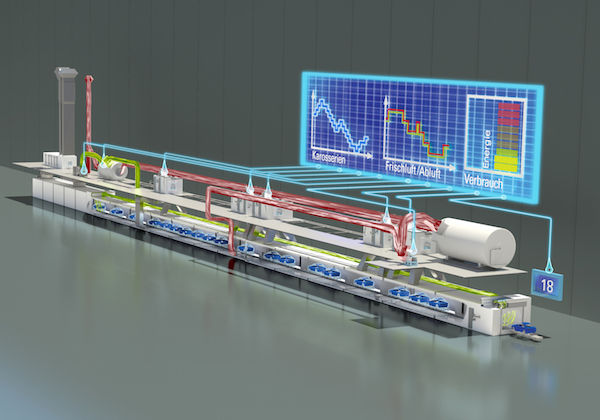 The newly developed technology toward the intelligent factory: Duerr software solution for controlling fresh and exhaust airflows at Daimler AG in Rastatt, Germany

A mass of hot air: The oven is the highest energy consumer in the painting process
When it comes to hardening the individual coating layers of paint on the body, an enormous volume of hot air is required. This means that the drying process alone consumes about one-third of the entire energy demanded by a paintshop. This is even more remarkable when you consider that the paintshop itself is the largest consumer in the entire production process. Small wonder that manufacturers want to make adjustments in this respect.

As the oven is fed continuously with hot air, any breaks in production, or idle cycles in particular, mean that far more heat is supplied than is necessary. Even if car manufacturers already rely on energy-optimised, exhaust-heat recovery systems that return residual heat to the heating process, a great deal of heat ultimately is lost to the environment. From experience, the figure is around 50%. To counter this problem, Dürr has developed the EcoSmart VEC air-management system which adapts the energy consumption of the oven to its current demand.

"Energy efficiency today is a topic that our customers regard as a genuine value driver. Our task is to find solutions that combine the energy savings with perfect product quality," says Oliver Iglauer, project leader at Dürr responsible for developing EcoSmart VEC.

Improved energy efficiency through intelligent air management
In conventional oven systems heated by pure gas, fresh-air intake and exhaust-air removal are operated at a constant volumetric flow. Any attempts to adapt the energy budget to the oven usage level have previously been made by means of a pure gas temperature control that aligns itself to the flue temperature. The drawback is that this method only allows a delayed response to any changes in the process conditions.

The EcoSmart VEC air-management system from Dürr, on the other hand, is a predictive controller. This product – protected by several patent applications – controls the volumetric flow of fresh and exhaust air according to the number and position of the vehicles that are located at that moment in the drying oven. A body counter is located directly at the air-seal entrance for this purpose. Based on the conveyor speed, the air-management system continuously and accurately calculates where the bodies are located, in which oven zones, and how this capacity will develop in the course of production. On the basis of this and other information – for example, the weight and surface measurements of the car body – EcoSmart VEC can control the fresh- and exhaust-air fans fully automatically. In this way, the system ensures an optimum and individual supply of air to each oven zone at all times.

"With this new approach, we have succeeded in combining the two aspects of energy efficiency and consistently high paint-finish quality", adds Iglauer. "Due to the potential of EcoSmart VEC to make significant reductions in the flow of fresh and exhaust air, this system is of interest, not only for the production, but also for the commissioning and ramp-up phases of drying systems. In these cases, the saving of gas and electricity can be as much as 50%, meaning that EcoSmart VEC will pay for itself within a very short time." 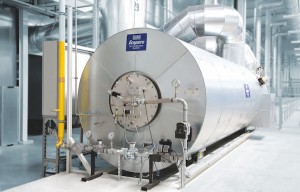 Optimum interaction of process exhaust-air purification and heating
The supply of heat to the drying ovens depends on the interaction with the air-purification system that is part of the oven installation. Recuperative thermal exhaust-air purification with the compact Ecopure TAR system from Dürr is a tried and tested, safe and universally applicable combustion process. The burner heats the solvents released by the body-drying process up to 720°C, thereby rendering them harmless. The pure gas created by this combustion exits the Ecopure TAR system via the integral heat exchanger, usually with a temperature of 450°C. The residual heat content of the pure gas is then reused by means of heat exchangers for heating the individual oven zones.

"The EcoSmart VEC air-management system ensures optimum interaction between process exhaust-gas purification and process heating. Fewer bodies mean less solvent. This, in turn, means that there is less exhaust air. As a result, the gas burner requires less fuel, since the enthalpy flow – in other words, the energy content of the pure gas – diminishes. The fresh- and exhaust-air fans also have to move less air," explains Iglauer.

Daimler invests in sustainable production plants
Even experts from the development department at Daimler, who are responsible for plant, process and application technology at Sindelfingen, have been convinced by the new Dürr approach. That is why as early as 2013 the decision was made, as part of a pilot project, to equip an existing ED oven at the Rastatt plant with EcoSmart VEC. During plant shutdown over the 2013/14 New Year period, experts from Dürr carried out all the necessary mechanical adaptations. For example, the fresh-air fan had to be equipped with a frequency converter. Integration of the EcoSmart VEC software into the existing controller was completed by the Dürr team over one weekend. This meant that the entire conversion could be carried out without any loss of production.

After successfully commissioning the system, Dürr remained onsite to oversee the first week of production. With the aid of the TeBIS energy-recording system from Daimler, considerable savings could be identified in real time. Although the oven is operated at a high capacity, gas and electricity consumption have dropped significantly. The paintwork properties of the dried car bodies, specifically the avoidance of paint runs that is relevant to the electro-dipping process, demonstrated a consistently high quality. This was a key demand of the car manufacturer that Dürr was able to meet with a high degree of satisfaction because those responsible at Daimler itself had been actively involved in developing the control algorithm.

Holistic overall concept
Whatever the baseline situation of the customer – whether straight-through or A-type oven, converting an existing plant or designing a new one – the solutions must be correspondingly flexible. "Matching the supply of energy to actual consumption is one thing. Preventing this from having any adverse effect on the plant function is quite another," stresses Iglauer. For example, if the fresh-air intake is reduced in a straight-through oven, this generally has a negative impact on the sealing effect of the air seals, with the formation of condensation in this area being a possible consequence. In order to counteract this effect, the engineers at Dürr – taking into account extensive tests and flow simulations – have developed a new and optimised fresh-air seal, specifically for use in straight-through ovens. This requires up to 50% less fresh air compared with a standard air seal, but offers an equally reliable sealing effect. This makes it an ideal component for deploying EcoSmart VEC in straight-through ovens.

The total quantity of fresh air is divided here into a variable and a constant share. The variable part – depending on the number of car bodies in the oven – is fed into the process by means of recirculating units. The air seals, on the other hand, are supplied with the constant share of fresh air and thus always operate under optimum and unchanging conditions. This creates the best conditions for reliable sealing. "Until we found a solution for the air seals, we could forget the idea of using variable fresh- and exhaust-air flows in the straight-through oven. With the new air-seal design, however, we can offer an integrated concept here as well," explains Iglauer.

The project at Daimler in Rastatt was not affected by this problem, as the electro-dip oven has a raised design and already has an effective air-sealing system with its A-type seals. The project centred on the validation of EcoSmart VEC. With the new air-management system, the CO2 emissions alone will be massively reduced by this oven, without any particularly extensive conversions to the existing plant that might temporarily affect production. As the pilot project at the Rastatt plant has already met all the criteria for a product release, the variable fresh- and exhaust-air control should be under consideration for other existing plants. Furthermore, Daimler already plans to anchor this technology firmly in its standard calls for bids.