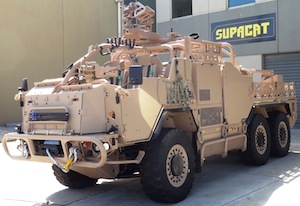 One of the UK’s most interesting specialist vehicle manufacturers is to be found in a collection of low-lying buildings at the edge of an old airfield at Dunkeswell, Devon, in the rural South West of the country. Supacat employs over 80 people at the site in the production of a range of protected vehicles for both military and civilian uses.

Its best-known products are probably two armoured personnel carriers, the HMT 400 and 600, respectively a 4x4 patrol vehicle and a 6x6 logistical counterpart - called the Jackal and Coyote in British Army service. More than 500 of the vehicles are in use, the great bulk of them Jackals, as a result of a now discontinued contract manufacturing arrangement that Supacat had with much larger partner Babcock. At its homebase, Supacat is more of a design, development, prototyping and low-volume manufacturing operation with a maximum output of perhaps one vehicle a week.

In this context, painting is an unsurprisingly low-tech process compared with the type of installation that might be found in a volume OEM plant. However, as support operations manager Toby Cox explains, painting still has a role to play in ensuring that the vehicles the company produces can meet the exacting demands which may be placed on them.

Paint processes
Cox says that the company operates two totally enclosed painting booths in which either whole vehicles or component parts can be processed. Painting is carried out by handheld sprayguns, while the air inside the booths is heated to the required temperature of 65°C by adjacent oil-fired burners. While there may not be a robot in sight, electrostatic charging of paint and work pieces is used to ensure adhesion of paint to metal surfaces.

Supacat has followed the increasing trend in the automotive industry towards the use of water-based paints. Cox explains that the company made the decision four years ago to use water-based materials wherever it could – the only exceptions being if a required performance specification was otherwise impossible to achieve or if a customer requested particular solvent-based materials. Cox says the move was motivated by environmental considerations but was welcomed by the staff who work in the paint booths, who report that water-based materials are much easier to apply.

Although paint or other coatings cannot provide a military vehicle with sufficient protection against an explosion, there are certainly instances when they can still prove an important, even potentially life-saving attribute. One example is when the paint needs to have infrared reflective properties to help to disguise the vehicle from hostile surveillance that could lead to it being targeted for attack.

Lifeboats & oil industry PTVs
More prosaically, another requirement is to provide enhanced corrosion resistance, something which is of obvious importance in a new and unusual vehicle developed by the company very recently – a Launch and Recovery System (L&RS) for the RNLI’s Shannon class lifeboats. The system comprises a 19.2m-long high-mobility tractor and powered-carriage system to transport the 18-tonne vessels across a beach to the water. The first of them is due to enter service in January 2014 at Dungeness in Kent, with 10 other locations confirmed to follow so far. The vehicle can be operated in water at depths of 2.4m and withstand full submersion in water up to 9m deep in the event of immobilisation. In this case, a key protective technique is hot spray galvanising.

Paints also have a role to play in a prosaic-looking but in fact very clever vehicle intended to cope with the challenges of working in one of the most hostile environments the Earth can provide for any sort of automobile. The vehicle, seven of which have now gone into service, looks disarmingly like a large camper-van. This is the PTV (protected transit van) developed by Supacat to act as a personnel carrier to support oil and gas exploration in the North Caspian Sea region.

It comprises the chassis of a Mercedes-Benz Sprinter surmounted by an airtight compartment capable of slight over-pressurisation compared with the external atmosphere – a necessary attribute when that atmosphere contains high levels of the colourless, flammable and extremely poisonous gas, hydrogen sulphide. External temperatures in the projected operating environment also vary between -36°C and 42°C.

Using aerosols to combat deadly gases
In this instance, a key capability was provided by a graphite-based coating applied by nothing more exotic than a handheld aerosol can to the internal plastic surfaces of the vehicle. As Cox explains, the GRAPHIT 33 from CRC Industries inhibits the build-up of static electricity by providing a conductive path to the main shell of the vehicle. The point is to mitigate what could otherwise become a source of sparking and protect against dangerous gases such as methane and other hydrocarbons.

The exterior surfaces of the vehicle, Cox adds, are painted with an industry standard ‘two-pack’ set of heavy epoxy materials, in this case the Rust-Oleum 9180 primer with a topcoat of the Rust-O-Thane 9900 acrylic polyurethane material.

Cox makes the point that, although the materials and application techniques employed by Supacat may seem routine, both are constrained by very precise sets of customer demands. Such is the case with an HMT variant called REDFIN used by the Australian Defence Force, the prototype of which was delivered late last year. In this case, Cox says the solvent-based paint has to be sourced from Australia and applied according to a strict set of instructions governing shot blasting, the resultant hardness of the surfaces to be painted and the maximum permissible timeframe between surface preparation and painting.