Lasers are becoming an increasingly common sight in automotive production. Today, they are quickly and reliably welding everything from transmission components to body parts. Lasers also enable the use of lightweight construction designs that would simply be impossible with conventional welding techniques.

RobScan is a new laser welding process that was introduced to series production lines by DaimlerChrysler at the beginning of 2007.

The innovative high-tech system, which is the result of five years of research and development, stands out through its extremely high processing speed. At present, it is being used to make around 600 weld seams in the doors, side panels and rear end of the new Mercedes-Benz C-Class.

The scanning head in RobScan is a completely new development. Mounted on the end of the robot arm, it uses two electronically controlled adjustable mirrors to move the tightly focussed laser beam from one welding spot to the next at lightning speed. However, the system does not stop at each welding spot to make a seam before moving on a few centimetres to the next spot. Instead, the steel robot arm continually moves along the component while the scanner head simultaneously guides the laser beam ‘in flight’ across the components.

“The RobScan technique, also known as ‘welding on the fly’ and ‘remote laser welding,’ is the state-of-the-art technology in the field,” says Markus Beck from the Vehicle Construction department at the DaimlerChrysler Research Centre in Ulm, Germany. “The energy-intensive light for the system is generated by a disc laser, which along with a very powerful output of four kilowatts also boasts an extremely sharply focused beam. It directs this beam to the robot arm’s scanner head via a glass fibre cable measuring several meters in length.”

Tests conducted by Mercedes-Benz under operating conditions similar to those in series production have shown that device reduces welding times by nearly 80 per cent compared with conventional resistance welding procedures.

That not only saves time in production, it also significantly lowers investment costs by reducing the number of welding stations and robots required, also saving space.

The big advantage offered by concentrated laser beams is that their intensity can be adjusted exactly. They can also be very precisely controlled and their energy applied at exactly the point where it is needed. That is why their application range is so broad, covering everything from CD players and supermarket scanners to medical devices for eye operations. They also serve as universal industrial tools for cutting, drilling, welding and labelling. 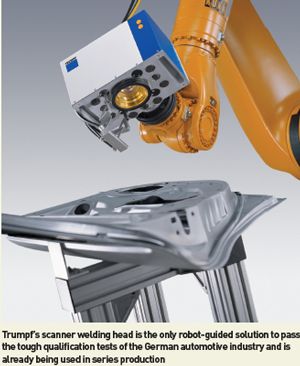 Laser beams propagate in an almost parallel manner and can be focused very strongly with the help of suitable optics.

In other words, it is possible to direct all the energy of a laser beam onto a very small point. If, for example, the high powered laser (four kilowatts) used with RobScan is focused on a spot with a diameter of 0.6mm, the average intensity of the light spot will be two megawatts per square centimetre.

By way of comparison, an electric hotplate has an intensity of approximately five watts per square centimetre, which means the intensity of the laser is 400,000 times higher.

A laser beam will only melt material at the precise joining spot (and also does this extremely rapidly) and because of this it doesn’t subject the component involved to as much energy than a conventional procedure such as arc welding or metal inert-gas welding does. The less heat a component is exposed to, the less it will deform, which in turn means that less time and money has to be spent on reworking.

Laser welding is also a big help with lightweight construction, as it enables engineers to shorten flanges (the overlapping areas between two workpieces). This in turn reduces the weight of the components and thus lowers the vehicle’s fuel consumption. For example, using laser welding, development engineers were able to reduce the flange width of the high-strength steel sheets in the door of the new C-Class from 16mm to 8mm. Here, the fact that the overlapping areas are joined by short weld seams rather than weld spots increases the mechanical stability of the doors.

It was also possible to make the door frames substantially thinner, which improves visibility. Laser welding has therefore made a big contribution to improving safety and comfort in the new C-Class.

With all the benefits laser welding offers it would seem reasonable to use lasers in as many areas as possible. This is why engineers have integrated more than 50 laser systems into series production operations over the last ten years. “This number of applications will definitely increase because the potential offered by lasers is far from fully exploited,” says Beck.

Altogether, 14 metres of weld seams in the Mercedes-Benz S-Class body-in-white are now being made using lasers. The components that are being welded with high-energy laser beams include the doors and the longitudinal member at the front end. In addition, welding lasers are being used to make the E-Class’s roof frame and hatch door, the CLS’s roof frame and the Viano’s roof. For its part, the new Mercedes- Benz Sprinter boasts 21 meters of laser weld seams, which guarantee good connections in the floor and roof areas.

Laser beams are also used to join the aluminium components in the doors of Maybach and S-Class vehicles.

They are particularly suitable for use with aluminium materials due to the low levels of heat they produce in the workpiece. Conventional welding techniques, on the other hand, lead to relatively large thermal deformations in the light metal components. “Laser technology really sets the pace today when it comes to lightweight design and fuel economy,” says Beck.

Advances in lasers are not only leading to lighter and more stable structures for bodies-in-white, however. When used for soldering processes rather than welding, for example, the concentrated light beams open up completely new design possibilities for the finished body. Mercedes- Benz has, in fact, been using laser soldering since 2003 for the trunk lid in the SLK and CLS, as well as for the side panel of the Sprinter. The technique is also employed on trunk lids and hatch doors in the new Mercedes-Benz C-Class. Body components that cannot be formed from one original piece can also be created using two pieces joined through laser soldering, whereby the soldering seam here additionally serves as a design element that is directly visible to the customer. 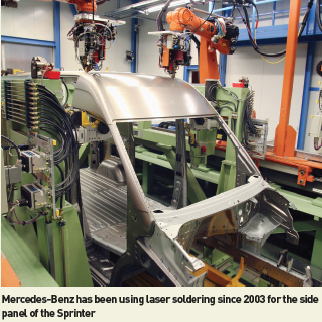 The development of this process led to robot-controlled laser scanner welding in which the movement of the bending arm robot can be combined with the highly dynamic positioning movements of a laser scanner. Audi has introduced this highly efficient manufacturing technology for the first time in the doors of the successor to the Audi A4.

A significant challenge in this development was the availability of suitable laser sources with appropriate available beam quality. Lamp-pumped rod systems with a beam quality of 25 mm*mrad have already demonstrated their industrial suitability a thousand times in conventional laser welding applications. With values clearly exceeding 99 per cent, these beam sources set new availability standards.

However, a much higher beam quality is needed for laser scanner welding because the size of the processing space for a scanning optical system and possible work area are dependent on beam quality. Since the potential of rod geometry has been exhausted as far as beam quality is concerned, only novel laser concepts can meet the requirements of improved beam quality. Trumpf developed the disk laser for industrial use, and it has been successfully used worldwide since 2004. Boasting a standard beam quality of 8 mm*mrad for the high power series, with a maximum power range of 8kW, the disk laser is used in all laser applications, from cutting and conventional welding to laser scanner welding.

Another Trumpf development is a scanner welding head for industrial use specifically for this power range. It has so far been the only robot-guided solution to pass the tough qualification tests of the German automotive industry, and it’s already being used in series production.

Recently, DaimlerChrysler began using this process in the manufacturing of its new car bodies.

Since January 2007, Audi has been welding with the new laser technology, thereby putting to good use the experience it gained with previous laser welding applications.

The advantages over conventional processes are mostly in clearly improved productivity. The time that had been spent positioning the robot has been greatly reduced by the fast mirror movements of the scanner head, thus drastically reducing processing time. Compared to resistance spot welding, in which an average of about 0.5 welds per second can be achieved, laser scanner welding typically can complete three to four welds per second. This results in a much better utilization of the laser beam source, which in turn results in significantly higher economic efficiency. In addition, the high efficiency of the disk laser ensures the low operating costs of the laser source.

A wall plug efficiency of about 25 per cent lowers energy costs compared to lamp-pumped systems and demands much less from the user’s supply infrastructure (such as floor space and cooling requirements).

The development engineers at Audi and VW researched the advantages of the laser scanner process. Special challenges included fixturing and the preparation of parts, but Audi solved these tasks and today the quality of the manufactured parts is excellent. The Audi experts developed a laser-aided pre-treatment for the individual parts that guarantees high welding quality in spite of existing zinc coating. The tools they used were the pulsed Nd:YAG lasers.

Since early 2007, the doors of the Audi A4 successor have been welded with a scanner system and the 4kW disk laser.

Four manufacturing cells produce 1,800 doors per day using this technology. The tool’s 4kW output is generated by only two disks. Audi relies on the advantages of The Laser Network (TLN) that allows lasers to be interconnected with one another as needed, thus ensuring ease of back-up and maximum of laser utilisation.