Despite recent economic difficulties across Europe, vehicle manufacturers are making gains in Spain 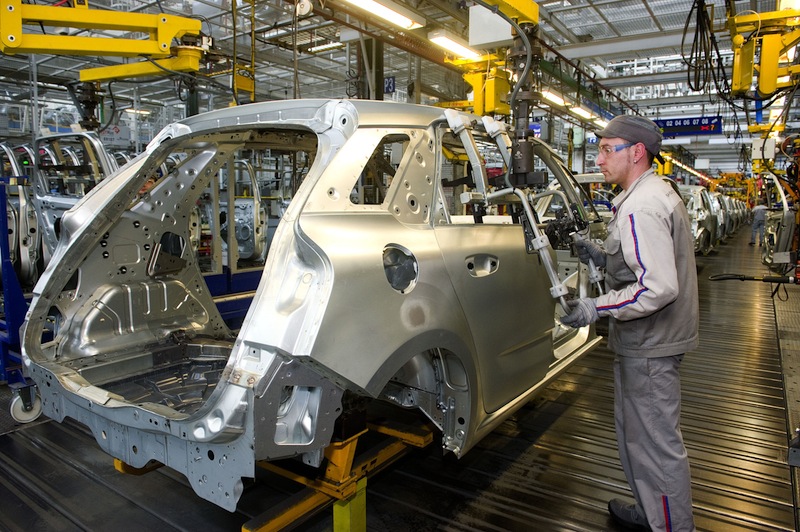 The collapse of the Spanish economy has been seen as one of the most symbolic examples of the economic turmoil affecting Europe in recent years. Falling car sales were a clear indicator of the country’s problems. In response, the government boosted sales with a series of interventions, subsidising new-car sales under a scheme called ‘PIVE’ (Programa de Incentivos al Vehículo Eficiente). The first version was launched in 2012, while the most recent, PIVE7, came into effect in March 2015. In the latest scheme, €175m ($195m) will provide discounts of €2-3,000 a vehicle, with the expectation of generating an additional 175,000 sales; the Spanish authorities are clearly hoping that most of these will be of locally made vehicles.

As well as boosting vehicle sales through PIVE, the government and automotive industry have embarked on a mission to boost production and maintain the sector’s long-term future in the country. ANFAC, the Spanish automotive trade body, predicted that €1.5 billion would be committed to Spanish vehicle plants in 2014, to add to the €3.5 billion which had been committed since the recession. This investment programme is integral to the national ‘3 Million Plan’, a strategy developed by ANFAC and the Spanish government in 2012 which aims to raise Spanish vehicle production to 3m units a year, well above the levels projected for France and the UK.

At present, Spain is some way off this target, but it is heading in the right direction; the many investments described below suggest that the country may get close. Data from ANFAC shows that 2.4m vehicles were made in the country last year, with the expectation that production will rise to 2.6m in 2015.

Although it does not have a nationally owned brand, Spain hosts several vehicle manufacturers, operating from more than ten plants. Importantly, the Spanish factories all play crucial roles in these brands’ international strategies. For most models made in Spain, the Spanish location is either the sole or principal factory in Europe, and in some cases globally. Consequently, moving production away from Spain would be an expensive and disruptive process.

In parallel, Spain has won significant recent investment in projects which have a very strong export element. Traditionally, Spanish vehicle plants have exported primarily to EU markets, but the widening variety of vehicles now made in Spain cater to a more diverse set of markets, including Russia, Israel, China, North Africa, Turkey, Brazil and the US.

Renault: First off the mark
In November 2012, not long after the 3 Million Plan was announced, Renault Spain went public with its own Industrial Plan. This involves significant expansion at its two car plants, in Palencia and Valladolid, plus the powertrain plant at Seville. At Valladolid, production of the Captur B-segment Crossover has been far beyond initial expectations. Exports to Korea and China, as well as the runaway sales in Europe, placed severe strain on the supply chain’s capacity and it took time for both the plant and its suppliers to adjust to the higher than expected demand. Almost 210,000 Capturs rolled off the line in 2014, of which around 18,000 were sold as the Samsung QM3 in Korea.

Following the success of the Captur, Renault has announced that it will build a larger crossover, the Kadjar, at the Palencia factory. This is a parallel vehicle to the Nissan Qashqai and is based on the same CMF C-D platform which underpins the Qashqai, Nissan Rogue and indeed the next Megane and Scenic. Production of the Kadjar, which has 60% of parts in common with the Qashqai, began in March 2015, with daily output due to exceed 360 in May and 460 in June. Kadjar capacity is around 100,000 units per year, although this is well below Qashqai capacity. Palencia is also the lead Megane factory for Renault and it will start making the new model at the end of October 2015. In order to meet these extra demands, a third shift will be added before the end of the year.

Ford: No pain in Spain despite European woes
Following significant European losses over a number of years, Ford decided to transfer production of the new Mondeo, S-MAX and Galaxy models from Genk in Belgium (now closed) to Valencia. This has involved investment in Valencia of $2.6 billion, with 2015 production due to be around 400,000 units, compared with its 450,000 annual capacity.

Daily production of the new models, plus the Kuga SUV and Transit/Tourneo Connect vans totals 2,000 units, while employment has risen to 8,000 from less than 5,000 in 2013. Valencia is the sole European production source for all these models (production of most of them also takes place in Russia, but for the local market only). The production increase and new model mix means that the factory now handles 18,000 different parts, compared with 7,000 before.

In order to raise capacity and give the factory the flexibility to make six models and even more body styles, a new bodyshop has been built. The Mondeo has also required the installation of tooling to make the industry’s first hydro-formed parts using high-strength steel. A new paintshop has been fitted, with automated stages which remove the need for drying between applications, plus new dirt-detection technology. No fewer than 900 robots have been added to the bodyshops, and 34 in the assembly hall.

PSA: Vigo vigorous while Cactus saves Madrid
The OEM’s plant at Vigo in northern Spain is one of its largest. The factory focuses on high-bodied compact vehicles, notably the C4 Picasso and Berlingo/Partner vans. These vehicles could not go through PSA’s French paintshops when they went into production originally, and the plant’s success has meant that subsequent models have been retained at Vigo. In April 2015, PSA and GM confirmed that one of the few remaining vehicles from their ill-fated alliance would be added to Vigo’s portfolio. Production of the next generation Berlingo/Partner B-segment vans/mini-MPVs and a replacement for the Fiat-sourced Opel/Vauxhall Combo will occur at Vigo from late 2017. These models are expected to account for around half of the plant’s output of 500,000 units per year in 2018. 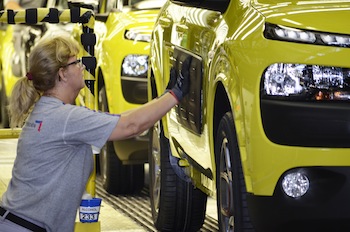 Vigo won this new contract ahead of the PSA plant in Trnava, Slovakia, following a union agreement which will see wages remaining unchanged in 2015 and 2016, subject to inflation staying below 1.5%. The potential competitiveness of the Vigo plant had become clear some years back, when PSA decided it could economically make the Peugeot 301 and Citroen C-Elysee ­– models designed for emerging markets including Turkey, the Middle East and North Africa, rather than core EU markets. The implication is that such vehicles do not have to be made in classic low-cost locations.

However, it is not only at Vigo that PSA is investing, with €237m spent at the Madrid plant which many analysts had been expecting to close. The unusual-looking C4 Cactus, with its distinctive air-bumps on the exterior, is similar in size to the Peugeot 308/3008 but is actually built off the smaller Peugeot 207 platform. So successful was the C4 Cactus on launch that extra shifts to keep up with demand were added in November last year.

For all its initial success, the C4 Cactus is unlikely to fill even half of the plant’s 200,000-unit capacity in the short term. Last year, production totalled just under 60,000 units, including the outgoing 207 compact and CC model. Manufacture of the 207 hatchback stopped in June 2014, while production of the CC model continued into 2015 but has now ended. The significance of the Cactus is that, without it, the plant would have had nothing to make; around 1,600 jobs were saved, and another 200 have been added since the model moved to full production rate.

Nissan: Sunderland full, Barcelona expanding
The Japanese OEM’s plant at Sunderland, UK, is essentially full. Following the decision to make the Infiniti Q30/QX30 there, this factory could not make the C-segment car which was also planned for the UK. Nissan’s underutilised Barcelona plant has been the beneficiary, receiving €130m to make the Pulsar, the long-awaited replacement for the Almera at a rate of 80,000 units per year. This is part of a wider €431m investment which includes production of a new pick-up truck (to be sold under the Nissan, Renault and Mercedes names), gearboxes for the UK-built Leaf electric car and electric versions of the Barcelona-built NV200 van.

The Renault-Nissan-Daimler alliance has recently expanded into the pick-up arena. This latest development will see Daimler and Nissan jointly developing a mid-size pick-up, a vehicle which Daimler has not had in its portfolio before.  Pick-ups based on the new NP300 Nissan platform will be built at Nissan in Barcelona and at the Renault plant in Cordoba, with vehicles sold under the Mercedes, Nissan and also Renault badges. Production will begin by 2020, with capacity for all three brands in Spain due to be around 120,000 units per year. 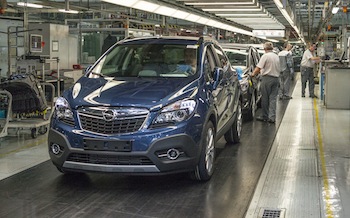 GM: Lack of capacity in Korea helps Zaragosa
The American vehicle-maker is in the midst of expanding production at its Zaragosa plant. Production of the upgraded Meriva launched at the start of 2014, while the revised Corsa is also now on stream. GM has invested €80m for the CKD assembly of the Mokka SUV, with more investment to come as the plant prepares to switch to full manufacturing from 2017. CKD manufacture of the Mokka was added to Zaragosa because global demand for the model could not be met by the Korean plant where the model started production.

In addition to the Mokka, the plant is also preparing for the full replacement models for the Citroen C3 Picasso and Opel Meriva models. Zaragosa will be the only Opel plant to benefit, in terms of producing for PSA, from the short-lived PSA-GM alliance. With total 2014 production of just over 298,000, against a capacity of close to 500,000 units, the addition of the Mokka and the new PSA-GM models will be needed for Zaragosa to achieve full utilisation. By 2017, production at Zaragosa should be above 400,000 and possibly over 450,000. The factory needs to produce in this range in order to justify the multi-million euro, four-year investment plan which began in 2013.

VW Group: Seat’s fortunes start to turn
Pamplona is VW’s sole Polo European production site and made just under 306,000 units in 2014, of which around 85,000 were the outgoing A05 Polo. The balance was accounted for by the new model made on the MQB platform and for which started production at the end of April. Recent investment at Pamplona has centred on paintshop and environmental technologies, which are claimed to be the most advanced across the VW Group.

Meanwhile, Seat, the main Spanish arm of the Group, which has been loss-making for many years, is beginning to turn around its fortunes, at least in terms of production numbers. It made nearly 443,000 vehicles in 2014, up from 390,000 in 2013. A crucial element here has been Audi’s decision to allocate European production of the Q3 SUV to the Martorell factory since 2012. This has added around 100,000 units a year to the plant’s output. It is interesting to note that, just as Audi has helped Seat by contracting production to the Spanish operations, some future Seat models which will help determine the brand’s future, are being made by Skoda in the Czech Republic. The first such model is the Toledo (which is the same as the Skoda Rapid, barring some styling changes); one of the forthcoming Seat SUVs will also be made by Skoda, but at least one and possibly two SUVs will be made by Seat itself in Spain. 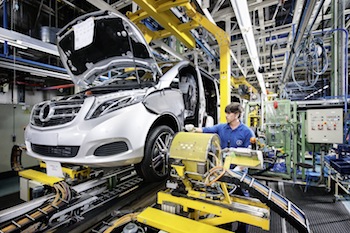 Mercedes: Investing in LCVs
Mercedes has been active in two ways; at its own van plant in Vitoria, northern Spain, and most recently through the Daimler-Renault-Nissan alliance. In 2014, Mercedes completed a €190m investment in Vitoria for production of the new V-Class MPV and Vito van; total capacity here is around 75-80,000 units per year. V-Class production had started in March, with Vito production beginning in August. For the first time, Vitos will also be sold in North America.

Investment focused on improvements to the bodyshop, paintshop and general assembly areas, with new co-ordinate measuring machines capable of assessing body-in-white assemblies to within 1mm; new optical measuring machines; a new waxing facility; plus additional lasers, robots and automation. Details on the new pick-up have been noted above.