As the Japanese OEM adds new facilities for Infiniti and Mercedes production at its complex in the north-central state of Aguascalientes, AMS examines the reasons behind the long-standing success of this operation 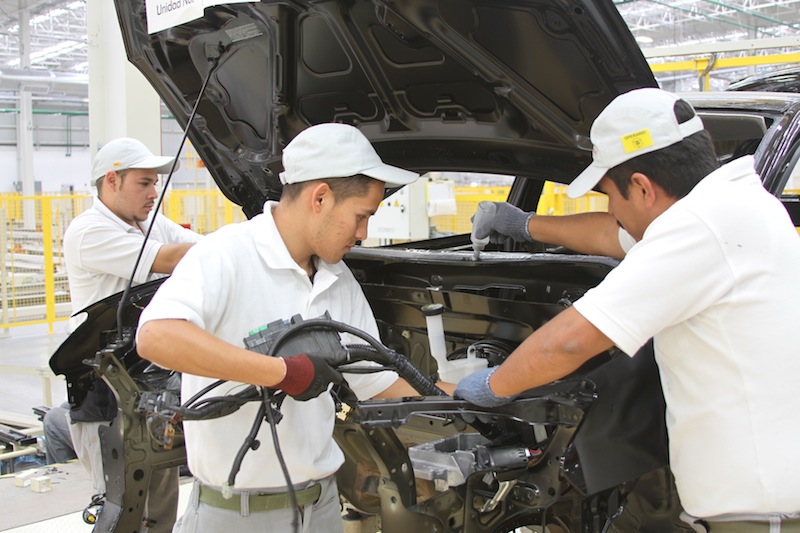 Nissan is close to hitting capacity in Mexico again thanks to the continuing success of its Aguascalientes manufacturing complex in north-central Mexico. The set-up comprises two plants four miles apart and together they made just under 600,000 cars in 2014. A third Nissan plant in the south-central state of Morelos pushed the 2014 total to 805,871, a record for the Japanese OEM in the country. Nissan has stated that it wants to make 1m cars annually in Mexico, without giving a timeframe, but that goal will almost certainly be reached by the end of the decade, when production from a third plant in Aguascalientes making cars for both Nissan’s premium arm, Infiniti, and Mercedes is fully on stream.

Nissan’s role in cementing Mexico as a global force in automotive manufacturing stems in part from its longevity in the country. The Cuernavaca plant in Morelos started out making Datsun Bluebirds back in 1966, when it became the company’s first-ever production base outside Japan. Aguascalientes opened as an engine plant in 1982 and then added vehicle assembly in 1992. In 2013, a second plant joined the set-up; known as Aguascalientes 2, this facility was built in what Nissan claims was a record 19 months and pushed up the company’s Mexican capacity from 680,000 to 850,000 units per year. In May 2015, Nissan Mexicana (as the OEM’s operations in the country are called) passed a major milestone when it made its 10 millionth car.

Aguascalientes was considered an ideal location for the second factory, situated halfway between the major population centres of Mexico City to the south-east and Monterrey to the north-east. Trains linking the two passed through the old silver-mining region of Aguascalientes (‘hot waters’ in Spanish, after the local thermal springs). In total, the vehicle-maker has 12,053 employees in the country, not far off the 13,231 it has in the US. Between them, the Aguascalientes sites employ 4,852 people, predominantly making cars for the US.

Aguascalientes opened as an engine plant in 1982, added vehicles a decade later and in 2013 established another vehicle plant
Last year, Nissan exported over half a million cars from Mexico, the first time it has hit that level. The company only started exporting in 1972, first looking south and west to Latin America and the Caribbean rather than its northern neighbour. US exports did not begin until 1995 but quickly this became the dominant market for the cars and last year took 368,350, or 68% of the export total.

As with many manufacturers attracted to Mexico for its wide-ranging free-trade agreements, Nissan Mexicana sends its cars all over the world, the company claiming 50 countries in total. Again like many of its fellow makers, Nissan has taken advantage of Mexico’s cost-competitiveness to make smaller cars profitably and take advantage of the US shift in tastes toward smaller models. The second Aguas plant (as the name is shortened within Nissan) makes just the Nissan Sentra sedan, a Ford Focus rival, after US dealers complained of a shortage. The factory is working 23-hour days, six days a week for 285 days a year, and in 2015 will likely burst its 175,000-unit capacity.

The Sentra is also still made in Aguas 1, which last year hit its 380,000-unit capacity, according to Nissan figures. A spokesman for Aguascalientes said that 100% of all Sentras sold in the States are built in Mexico. Key markets for Aguas 1 include Canada, which takes the Nissan March/Micra B-segment hatch, and Colombia, where the B-segment Versa sedan was the country’s third-bestselling vehicle last year.

The capacity pressure is starting to ease, however, as Nissan ramps up production at its new greenfield plant in Resende, Brazil. That factory, in the state of Rio de Janeiro, has a capacity of 200,000 vehicles and this year has started building the Versa, the car that in 2014 was by far the biggest production model for Aguas 1. Resende’s influence has already been seen in the production figures for 2015, with the Versa down below 70,000 from just over 100,000 in the half-year to the end of June, compared with the year before. However, with Latin America only taking around 14% of exports, it might not be the pressure valve that Nissan hoped for.

Leading the local market
Mexico’s automotive success is as an exporter, but Nissan has also built up an impressive local sales tally and in 2014 was the country’s biggest-selling brand, with figures of just under 300,000. That gave it a market share of just over a quarter to beat long-time Mexico residents Chevrolet and Volkswagen. In July, Nissan boasted that it had held the number-one spot for 74 consecutive months. 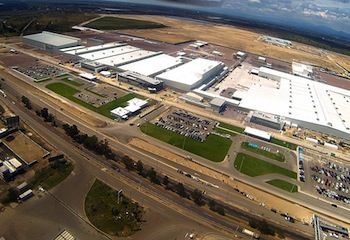 An aerial view of Nissan Aguascalientes, showing space at the back for upcoming Infiniti and Mercedes production
Its biggest-seller is the Versa, built on Nissan’s small V-platform at Aguas 1, with the March number two. Also popular are the new NP300 pick-up truck and the long-running Tsuru sedan, which started out life as a Sentra in 1992. Both are built at Morelos, which is not as automated as the twin Aguas plants.

The difference between the two sites is highlighted in the employee/capacity ratio: the Aguas 1 plant has 3,519 employees with a maximum hourly capacity of 65 units, while Morelos has 4,444 employees with an hourly maximum of 58. Nissan has said that the bodyshop in Aguas 2 is 72% automated, equipped with 190 robots. This newest plant also has what Nissan claims is the largest stamping press in Latin America, capable of 575 strokes an hour and 273,000 parts per month.

Infiniti and Mercedes arrive
Plant managers welcome premium vehicles to their facility as both a reward and a challenge. Seat has found this in Martorell, Spain, where the arrival of the Audi Q3 boosted the quality of its own vehicles too. From 2017, Aguascalientes will make premium vehicles of its own when the first Infiniti C-segment cars emerge from a new facility which, a year later, will also start to produce related Mercedes models, expected to be part of the A-class family. The two are likely to be built on a new platform developed jointly by the two companies, with production aimed largely at the US.

The new factory will be jointly owned by Nissan and Mercedes parent company Daimler, which together will invest $1 billion. Situated next door to Aguas 2, it will employ 3,600 personnel by 2020 and will have an annual production capacity of 230,000 units, according to a recent statement from Daimler. There will be an increase to 300,000 units and 5,700 personnel by 2021, according to a sustainability report published by Nissan in March. Unlike Audi, which plans to make Mexico its sole production base for its new Q5 SUV due next year, Nissan and Mercedes will also build these cars in Europe and China.

A spokesman for Nissan in Aguascalientes said that there were no plans for the factory to build cars for Nissan’s Alliance partner, Renault. However, cars wearing the French badge will once again be built in Mexico when the Cuernavaca plant starts making a Renault one-tonne pick-up based on the Nissan NP300 from next year. It is a measure of how close Renault-Nissan are collaborating these days that Mercedes will also sell a version of this pick-up, made in Renault’s plant in Cordoba, Argentina, for Latin American markets. Nissan used to build the Renault Scenic minivan at Morelos, the only one of the three with spare capacity.

It is also a mark of Nissan’s success in Mexico that this has been achieved without a single SUV. That will change from next year, when the OEM is expected to start building a new B-segment SUV based on the Kicks concept which was shown at the São Paulo Motor Show in October last year. Local news website Maquila Portal reports that Nissan is already modifying Aguas 1 to accommodate this car, which will plug into the same market space as the Honda Vezel/HR-V, also built in Mexico. A spokesman told AMS that the concept previewed a car for South America rather than the US, but that there has been no confirmation of production plans.

A growing supplier base
Despite the premium positioning of the Infiniti and Mercedes cars, Nissan is confident that the two will have a high level of local content, which it said in its sustainability report was down to the expansion of the Mexican supplier base. Nissan has played an active role in this development. When building Aguas 2 in 2013, the OEM also established a 140-acre supplier park known as Douki Seisan Park, with an initial five buildings of 1.6m sq.ft. Suppliers named originally were South Korean steel-maker Posco, seat specialist Tachi-S and brake and fuel pipe maker Sanoh; Nissan’s spokesman would not comment on more recent additions.

The localisation rate is an impressive 77% for Nissan cars already built in Mexico. It is not known yet whether the Infiniti and Mercedes models will use locally sourced engines, but in a big boost to the local content by value, the automatic gearboxes will come from a nearby Jatco plant, the company said back in 2013. This Nissan subsidiary has built a second facility next to Aguas to boost production capacity to 1.7m automatic gearboxes a year. The new plant, which cost $220m, builds continuously variable transmission gearboxes. 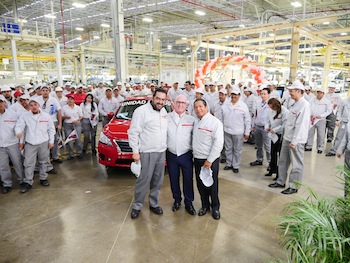 In March 2015, Nissan celebrated its 200,000th vehicle produced at A2 Plant. The OEM is targeting 1m units per year in Mexico
The vehicle-maker said in June that its Mexican operations spent $5.6 billion with suppliers in the financial year to the end of March 2015, rising to $7.2 billion this financial year. The company has said its goal is to get to 90% local content, but without naming a date. The new NP300 pick-up currently has the highest rate, at 84%. In the June statement, Nissan Mexicana listed the problem areas for localisation as raw materials such as aluminium alloys, steel and specialised resins.

Nissan in Mexico seems well placed to weather future storms – it benefits from a loyal local market, a high localisation rate, high demand for its competitively built small cars in the US, and lots of export opportunities elsewhere. It just needs to find additional flexibility to extract more capacity from a flat-out Aguascalientes.

Nissan has greatly emphasised its green credentials in Mexico and claims high rates of renewable energy usage, primarily wind power and biogas. Earlier this year, it reported that to date it had assembled a little over half a million vehicles using renewable energy. In 2012, it began receiving energy from landfill generated by the nearby Aguascalientes city, and a year later joined a scheme to take energy from a wind farm in the coastal state of Oaxaca. The company reckons this has prevented the emission of 152,800 tons of CO2 into the atmosphere from Aguas 1.

Coming later, the Aguas 2 factory benefitted from more advanced energy-saving ideas and the 192,000 sq.m developed space is naturally lit from translucent coverings on 7% of the roof. Other strategies include rainwater capture for use in irrigation, cleaning and bathrooms. Meanwhile, the paintshop uses a water-based three-wet technology with low volatile organic compounds. The plant also recycles 100% of its waste, according to Nissan. Overall, the company claims to have spent $23m on environmental technologies for the 1,130-acre plot. This means it consumes 1.73GJ per vehicle, against a Nissan worldwide plant average of 3.47GJ (a barrel of oil contains the energy equivalent of around 6G).