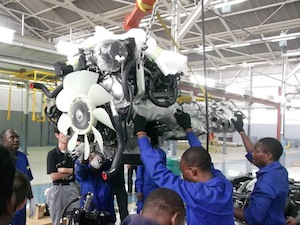 Nigeria – The first Nissan Patrol rolled off the line at the assembly plant ahead of mass production later this year. Some manufacturing of the Almera and the NP300 will also begin next month, before all three models enter series production in August. The OEM said it has become the first major manufacturer to build a car in Nigeria in response to the introduction of the new Nigeria Automotive Policy.

The production of the first Nissan Patrol for the local market, seven months after the policy was announced, also follows the signing last year of a Memorandum of Understanding between the Renault-Nissan Alliance and West Africa’s Stallion Group.

Takashi Hata, Nissan senior vice-president and chairman for the Africa, Middle East and India region, described Africa as his company’s “strategic growth driver”. He added: “By acting quickly to begin production in Nigeria, we are securing for ourselves first-mover advantage.”

Nissan says it is targeting “significant” growth in Africa as it seeks to reach 8% profitability by the end of fiscal year 2016. In other high-growth markets, Nissan has already opened plants in Mexico and Brazil, and has projects underway in Indonesia, Thailand and China. The OEM is also set to enter Myanmar.