It has leveraged this trust to expand its presence outside of its European stronghold to North America, South American, China and now Japan, a country that has traditionally looked inwards for suppliers. It currently has 101 plants, with eight under construction, and more than 36,000 employees globally, according to its website.

The company, which is still controlled by the Riberas family despite partially floating on the Spanish stock market earlier this year, has grown its revenue from €240m in 1997 to €7.5bn last year. It ranked 30th in the 2016 Automotive News Top 100 global automotive parts supplier chart by revenue, which also noted that 60% of its income came from Europe. It was the 15th biggest supplier in Europe. Nick Gibbs spoke to Gestamp’s chairman and CEO Francisco Riberas about the trends in the industry and why more companies are willing to outsource stamping, traditionally a job done in-house.

You’ve grown aggressively in the last few years. Is your goal to carry on growing?Yes. We are still a young company. In 1997 the turnover was €240m. It was close to €7.5bn in 2016. We have been able to grow more than the market because there are many opportunities for us. We have a very good diversity of customers and geographies, and good technology around high-strength steel and hot stamping. More importantly, the rate of outsourcing for our segment used to be very low and the last few years it’s really increasing. We are taking an important part of this increase.

Why do you do think companies are more willing to outsource now?They need money. Right now when you listen to anything around auto, you only hear about disruptions, in connectivity, in autonomous cars, in mobility, in electric vehicles. That’s a huge amount of money they need to invest. Why keep on investing a lot in producing components when suppliers are so reliable? In the case of body-in-white and chassis we tend to think in an autoplant there’s a press shop in the middle. But this is just because of history. Now we can do it. Why invest in the presses yourself?

Where is that happening most quickly?Everywhere. Western OEMs have a problem outsourcing in their mature markets where they have a lot of employees in their plants, but when opening new plants elsewhere they are going to full outsourcing. Even the Japanese Keiretsu [close relationship between client and supplier] system is not what it used to be. This system used to be always one customer, one supplier. Prices were fixed by cost, not competition. Now these suppliers are facing some difficulties as Japanese makers expand abroad. It’s very difficult for them to go global if you only you have one customer. Japanese OEM’s rate of integration in Japan will remain similar, but when they want to open a new facility outside Japan they will move to outsourcing.

So it’s happening in new plants?Yes. This is not a new trend, but it will increase. For example BMW in South Carolina, Daimler in Tuscaloosa, Volkswagen in Chattanooga, JLR in Slovakia. None have an in-house press shop. They have outsourced.

For JLR’s new plant in Slovakia, you’ll build a press shop, but you’ll be very reliant on them. Have they made guarantees to you?When you’re building capacity for customers like this you need to have a long-term business relationship, so we have agreement for two product cycles rather than one, so 12-15 years. The agreement is: more volume, prices come down; less volume and the prices are going to be a bit higher.

Your first plant in Japan will be ready in 2018, who is that supplying?Only Japanese OEMs. We did a good co-development programme with Honda, starting almost three years ago, and now we are producing all the hot-stamping parts for the Civic in the US. We will also work with Honda in Japan, but we see many other opportunities co-developing with Toyota, Nissan and Mazda. In Japan they usually work with one supplier but we have clearly stated we want to work with multiple customers.

You said in 2014 wanted a €700m business in China, where are you now?We are there. This year we will have a turnover of probably €750m. We now have eight plants running there and are building two additional ones, one in Tianjin, focused on Daimler, and we are also building a new plant near Shanghai, where we will be focused on die-making.

Local manufacturers are growing in China. What percentage of your business is with them?It’s still very limited. Most of our business until 2-3 years ago was 100% to joint ventures, eg SAIC with Volkswagen, Dongfeng with PSA. Pure domestic automakers were focusing on the low segment, so they were relying on very competitive suppliers with not very sophisticated technologies. Now it’s changing. We see companies like Geely or Great Wall clearly targeting the upper segments and we have started to work with them. They want to reduce weight too, which is why hot stamping is growing.

Do they demand cheaper prices for hot stamping?We are quoting, we are visiting them, but we need to be working in co-development. Without that you can’t show them how to save weight and increase performance. You are too late. The only argument then is to compete on price and this is difficult. Now we are starting to convince them to work in co-development. I think it’s It’s going to pay off very quickly. We are working well with Great Wall in the area of mechanisms [door hinges], because they need to improve the perception of quality in opening and closing doors.

Can you offer a product that is more price acceptable to them?The technology [such as hot-stamping] is not as cheap, but we are aware that the kind of design and development of parts we need to do in China and India maybe is not exactly the same as in Europe. We have a new R&D centre in Shanghai.

What are the big growth regions for you?Of course China is going to be the most important driver for growth but also the rest of Asia including India and ASEAN countries. We still have room to grow in North America. We think it’s is going to a to be an important growth opportunity for us in the next two years.

What is your view on Russia and Brazil. Will they come good again?They will be good news for us in the next years to come. We are very invested there. Some of our competitors are now out. What we need now is for the market to recover. In Russia it’s a bit more insecure because it’s more dependent on oil prices but we think we will have good news in the years to come. Some of the local competitors there went bankrupt and some of the global players left or didn’t invest. We have been able to take most of the important orders because there wasn’t too much competition. We didn’t think about leaving.

What effect does cheap Chinese steel have for Gestamp?The steel world is complex. Steel for car makers needs to be homologated so we can’t just buy from the open market. We saw from 2008 a clear decrease in raw material price until summer last year, when there was an important jump in prices then due to the introduction of anti-dumping measures in China. This is neutral for us, even if prices are going down or up, because we have a pass-through system. Part of our price is steel content and the other part is added value. So we adapt the price of the components to pass through any variation of the steel prices. We had been giving them discounts, now they are giving us an increase in prices. It’s neutral to us. 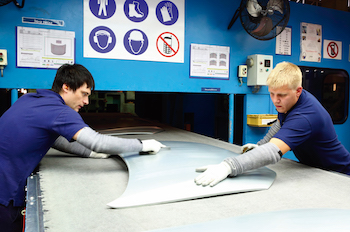 What is your split between premium and mainstream customers?Our exposure to premium is about 40%, so more than the distribution of the market. However because cost is not so important so they can go to aluminium in some cases. Customers like Ford and GM are using a lot of hot stamping.

What percentage of your revenue comes from hot stamping?It is growing. Last year it represented around €1.2bn, a bit more than 15% of sales. In 2007 we were running 16 hot-stamping lines, last year we had 71. The shift from cold to hot is enormous. The most advanced car terms of hot stamping is the Volvo XC90 with 38% of body-in-white weight. The average in Europe, the most advanced region for hot stamping, is 12-15% . Globally we estimate it’s around 8% of total of body in white content. In that next 4-5 years we think this is going to jump to 12-13%, so a huge growth.

What is driving this?Regulations in emissions and safety. The biggest factor affecting CO2 after the engine is weight. Hot stamping allows you to reduce the thickness of the metal but still improve crash performance. It’s also much less expensive than aluminium or carbon fibre.

McLaren say they have found way to productionise carbon fibre for body and chassis parts. Are you working with the material?We have done some research, we even produce some parts for high-end manufacturers. For cars such as McLaren it makes sense, but carbon can’t substitute steel and aluminium. They are finding a way to reduce cost a little, but it’s still a very, very high cost.

What is the main problem with carbon fibre?The manufacturing process is very difficult, not to produce but also to repair. Also you need to change everything. The industry has been working with steel for 100 years, we know how to do things. If you now want to introduce large-scale carbon fibre you need to start from zero.