Stamping is a process where every second counts. A time lag of 0.1 second may sound tiny, but multiplied over thousands of parts a week, over many years, the cost can be considerable. The range of solutions in this technology area has evolved tremendously and today comprises everything from stand-alone presses and transfer presses through to tandem press lines and hot stamping (press hardening).

Klaus Rothenhagen, vice-president of international sales at AIDA Europe, says more than 1,000 of the company’s high speed servo presses have been installed since the first model emerged in 1997. “AIDA high speed servo tandem lines have been installed at OEM plants in Japan, China and America, with new installations upcoming in Europe,” he says. “The latest lines are equipped with a high speed crossbar automation system in order to achieve speeds of over 18spm (strokes per minute). We are currently offering automation systems with one or two servo-driven link mechanism systems.” 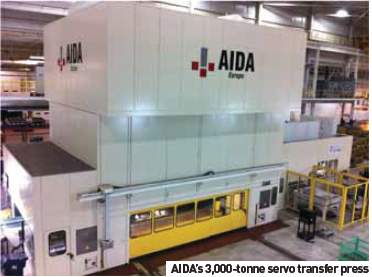 AIDA has also recently installed what it says is the world’s largest servo transfer press at a customer in North America, where it is used mainly for high strength body parts on the latest generation of German-designed cars manufactured in the USA. With a capacity of 3,000 tons and a bolster size of 6,000 x 2,500mm, the press is driven by four proprietary AIDA servo motors providing 30spm in normal operation and 35spm in pendulum mode – here the slide does not perform the whole stroke but only the portion necessary for the operation, thus allowing a higher output than a similarly configured mechanical press. The increased model variety and reduced lot size at the customer are supported by a sub-5-minute die change. The Schuler Group is also proactive in this area, and recently the company announced the biggest order in its history – no less than seven new press lines featuring Schuler’s ServoDirect technology will be delivered to BMW AG. The Bavarian car manufacturer ordered three highspeed servo press lines for its stamping plants in Leipzig and Regensburg, Germany, and Shenyang in China. At the same time, the auto giant reserved four of the same press lines for its German facilities. According to Schuler, the order volume is easily in the three-digit million euro range. Presses with ServoDirect technology feature electronically controlled torque motors that act directly on the press gearbox. The main benefit is that the slide movement can be programmed individually for each die.

As a result, the press can also accelerate or decelerate the slide during the stroke, thus optimising the forming process. This is not possible using conventional mechanical presses (flywheel machines) where the slide’s movement is dictated solely by the unchanging speed of the press transmission. At around 85 metres in length, the press lines ordered by BMW feature either five or six such Schuler servo presses linked together. At the beginning of the forming process, a blank-loader feeds the individual sheet plates into the line before robots transport parts to the next press station. The press lines boast a total press force of around 9,000 tonnes. In up to six separate operations, the sheet metal (with thicknesses of up to 2.5mm) is drawn, bent and blanked into the desired car body shape. The presses can process around 600 tonnes of steel per day. 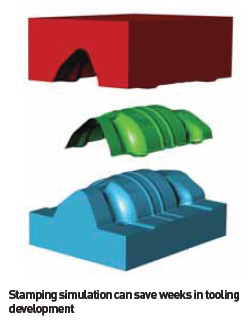 Of course, auto OEMs worldwide are looking to introduce new models more quickly than ever before. However, shorter lead-times also mean increased pressure on toolmakers. The traditional toolmaking route is a well trodden path for automotive manufacturers seeking press tool expertise. Finely honed skills translate into finely Well, yes, but the cost in lead-time can too much for auto firms looking to squ market and gain a jump on the compet Until recently, designers of automoti body parts, after issuing CAD data, wo rely on the experience of their preferre toolmaker to generate a quote for a progression press tool based on how many stages they thought were required to form, pierce and trim the panel. It's well documented that trying to create the part too quickly can result in unwanted effects such as wrinkling, cracking, stretching, spring-back and even splitting. These issues are even more common place due to the la engineering materials having less formability.

The toolmaker has to make a good call. “The tool is laid out using little more than an experienced guess,” suggests Chris Sharratt, director at Lodent Precision Ltd, a toolmaking company with more than 30 years’ experience in this market segment, and the UK and European partner for stampingsimulation.com, a global software company creating quite a stir in the press tool world. “The problem remains that you don’t know what you’ve got until the tool is machined, assembled, placed in the press and the metal is hit. Only then will any problems come to light, by which time the investment in labour and material is already considerable.” Of course, the only option here is to work backwards, ironing out problems by stripping down, re-machining, trying again…and possibly again. Weeks can be lost. But now there is another way – simulation. “In effect, stamping simulation is a development of FEA, it considers how the metal flows and reacts, replicating every problem that might be encountered, but in a virtual way,” says Sharratt. 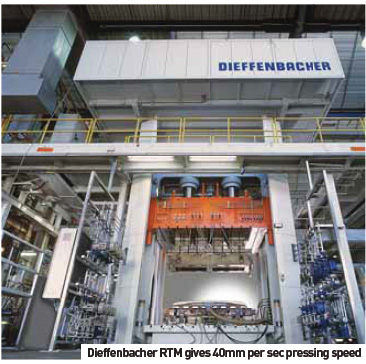 The trick here is that the exact material ified by the customer is mechanically tested beforehand, with the resulting data fed into the software. According to Sharratt, this methodology allows the toolmaker to see problems before they happen and engineer solutions. even allows the production of mming/clipping tools prior to the m tools (which traditionally have be made first), as there is no 3D chining involved, only wire EDM. ‘Revolutionise’ is an overused rd for many technologies, but with mulation I think we have a genuine e relating to press tool manufacture,” s Sharratt. “There is always initial pticism surrounding new Stamping simulation can save weeks in tooling development ess y honed tools, right? sometimes be ueeze time-totition. ive ould ed atest tric speci t It trim form to b ma “ wor sim cas say sc methodologies in an industry as mature as automotive, but I would urge everyone involved in pressing and stamping technology to take a look at this. Users can shave weeks, even months off tooling development projects.

Customers keen on investing in software from stampingsimulation.com typically acquire a licence along with the required number of seats. Of course, simulation has benefi ts for all types of press tooling – single operation, progression and transfer – from simple stamped parts such as brackets, through to complex body panels. And there is much mo as component an and even life anal tooling. Here, wea tion algorithms te precisely what are of the press tool will see wear, identifying the areas where surfa treatment will incr die life and aiding decision on which coating to use, saving on the need to surface treat the entire tool. ore functionality thrown in, such d process cost analysis, lysis for the ar predicell users eas ace rease g the

This is proper process engineering, not finding out at the end that it’s no good. Put it this way, the top 20 carmakers in the world already use it.” By way of a teaser, visitors to stampingsimulation. com can gain a free blank report by entering some basic data. Traditionally, engineers have to make an educated guess at what size blank is required to make the part, typically adding 10mm to the approximation, just to be sure. However, with the cost of raw material escalating massively in recent years, it is possible to save tens or even hundreds of thousands over the lifetime of a high volume part by using simulation to provide exact information. Materials have a huge impact on pressing technologies, and the imminent infiltration of composites is set to hit hard. E-mobility, CO2 emission limits, gasoline and energy prices – these concepts evoke the subject of lightweight design and high performance composites will play a prominent role. In automotive manufacture, parts produced with the resin transfer moulding (RTM) process are currently used for visual appearance and built into premium class vehicles in small quantities.

These continuous fibre-reinforced composites will only be used more widely in automotive manufacture for high strength support structures and outer skin parts as progress is made in the development of reliable, automated processes for RTM component series production.

An important element of the co-operation between Dieffenbacher and Krauss Maffei is future advancement to obtain sustainable HP-RTM process technology. In order to promote this, the Fraunhofer ICT in Pfi nztal, Germany has been equipped with an RTM cell consisting of a Dieffenbacher press and a Krauss Maffei HP-RTM mixing and metering unit (RimStar Thermo). This facility is used for both internal tests and customer experiments. The success of these developments is highlighted by equipment already delivered to German auto manufacturers that include BMW, Audi and Daimler

Dieffenbacher and Krauss Maffei are partners in the development of an automated production line for the high pressure RTM (HP-RTM) process. The system comprises units for pre-form manufacture, pressing and finishing. For the production of HP-RTM components, a pre-form made of textile reinforcement materials is required. Such pre-forms are manufactured in the Dieffenbacher preform centre using an automated process. Subsequently, the consolidated pre-form is placed into the RTM die by a robot. A hydraulic Dieffenbacher press performs the pressing process with a force of up to 3,600 tonnes, while a buffer drive makes it possible to achieve slide closing speeds of up to 450mm/s and pressing speeds of up to 40mm/s at short pressure build-up time. The low viscosity reaction mixture is injected into the closed die and the semi-finished fibre package is impregnated.

The dispensing technology of Krauss Maffei permits an application volume from 10 to 200g/s, depending on the resin system and according to the component size required and the process design. Processes such as this may well represent the future of press line technology in the automotive industry, although they are sure to continue evolving over the course of the coming years. Indeed, it’s these development processes that define automotive manufacturing. Every new technology counts because every second counts, every penny counts… truly a pioneering sector.