The supercar manufacturer’s CEO discusses the new 650S and how the company plans to build 3,500 cars a year by 2016 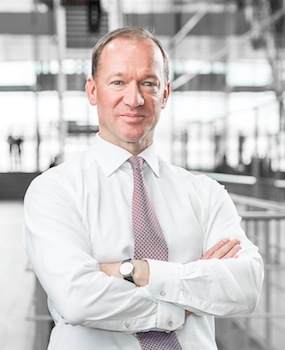 Glenn Brooks (GB): It’s been a busy 12 months for McLaren.

Mike Flewitt (MF): Yes, it has. If you look back to Geneva 2013 where we showed the first production specification P1, then launched it, the journey has been amazing. After Goodwood [Festival of Speed] last summer, the orders just took off. We got to August/September and we were sold out. We’re a business, but people spending the best part of a million pounds expect a level of exclusivity. So after all the angst we had about working out the right volume, we settled on 375 [cars]. And the closer we got to 375, sales just accelerated.

GB: How long will it take you to manufacture those 375 cars?

MF: We’re pretty much delivering one a day and we’re building through to May next year.

GB: When McLaren Automotive launched itself with the MP4-12C, a stated goal was to become profitable inside three years.

MF: We’ve been selling cars since mid-2011 so it’s not quite three years. Our business plan for 2013 was to break even; in fact we made a small profit. I can’t say yet what the exact amount is but it will be a single-figure millions number.

We put a careful plan together, we manage the volume of cars we put out to the market, we manage the price positioning so we understand our potential revenues, we’ve got the operational side of the business under control, and we’ve got four engineering programmes [for future models] running.

The team over-performed, and the plan we have for this year is the same, and the same for the year after that. We will be profitable as we build the business.

GB: Do you see McLaren making a high-priced, limited edition car intermittently – the next P1, so to speak? And does each model have to generate profits?

MF: It’s almost a yes to both questions. Yes, I can see us doing high-priced, limited edition supercars. OK, we have our mainstream cars like the new 650S, which in a sense is available to everybody, but it’s not. Because as the brand grows and the appreciation for the brand grows, we are limiting how many [cars] we make. But there is quite a big price gap between 650S and P1 so there’s a lot of space in there, and also above – there are plenty of cars out there for one-to-two million [pounds]. Could we do that in the future? We haven’t got anything in development at the moment, most of our development is focused on P13 and the evolutions of P13 (see model development table below).

The second half of your question – do these cars have to be profitable? – the answer is yes. McLaren is an independent luxury supercar company and we have to make money. It’s not so that we can pay shareholders, it’s earning the money so that we can continue to fund our next products. So we can’t afford to do a sort of loss-leader, marketing-driven car, and we don’t need to. We know the business well enough to design cars that there is a demand for, and where the cost-price equation works.

GB: You must surely have a remit that by a certain time you become self-funding?

MF: We are self-funding; we have positive cash-flow. This year’s investment is around £80m in product development, and adding that or slightly more every year as you go out. We put together a very detailed business plan at the start of 2013, we took that to our board, the board bought into that plan, we made a commitment as a management team to that plan, and we’ve met all those commitments. In fact, we slightly out-performed in 2013. Right now, we’re going back and reconstructing that plan, as we've learned a lot in 12 months. We won’t change much in the next two to three years, but further out we’ll continue to develop the plan.

GB: So you’ve now made all the major, one-off investments? The plant is there, a powertrain family is in place and so on.

MF: In terms of the infrastructure – the factory and so forth – yes. But never in terms of technology. I wish it was a one-off investment, but technology is moving so fast, powertrain technology in particular. So we’ll be investing in engines, in transmissions, in hybrid drive solutions, forever more.

GB: The powertrains aren’t manufactured by McLaren, are they?

MF: No, we don’t assemble it ourselves but it’s our engine. We designed it, we own the IP, and nobody else uses it. Riccardo assembles it for us in Shoreham.

GB: Why did you go down that route?

MF: We didn’t want to take on an engine assembly operation as part of our start-up. When you start a car company there’s a lot of things to do – putting together an engineering team, a sales and marketing team, a distribution team. That was all a huge challenge and we’re making great progress but we don’t need to make every single component. We do need to own the design and control the quality and the performance of our products. There are some very capable people out there in the supply base.

GB: Am I correct in thinking there are two lines at McLaren’s Woking plant? How flexible are they?

MF: Yes, we have two assembly lines. We run one for the 650S – we’ve just stopped building the 12C alongside it – that line runs at seven units a day and we have one for the P1, which builds one car a day. It’s an extremely flexible operation. What we envisage is when P1 finishes, we’ll lay out that facility in a new way; we’ll integrate P13 with 650S and have one production line for those vehicles.

There are a number of reasons why P1 runs down its own production line. The fact that the cycle time is so high is the obvious one – at one vehicle a day, it’s probably one of the longest cycle times in the industry. The other reason is the lithium-ion battery for the hybrid system. There are very strict regulations because of the high voltage, so these are the practical, operational reasons.

GB: Given that P13 will be less expensive than 650S, what sort of production numbers are you planning for it?

MF: Slightly more volume than 650S. Overall, the plan is for McLaren Automotive to be building 3,500 cars a year by around 2016.