Metton lightweighting in the hood

Vehicle makers are continually looking at ways to reduce the weight of their products, thereby decreasing costs but, at the same time, improving efficiency for consumers. Heavy duty rigs dressed in Metton are becoming the lightweight champions of the world

With fuel costs being a truck fleet’s biggest business cost (not too mention a highly volatile one given the fluctuating prices at the diesel pumps), anything a transportation firm can do to drive weight out of its equipment is a top priority.

Truck makers have come to realise this and countless engineering hours have been spent in R&D laboratories around the world in the search for ways to shave precious kilograms off commercial the gross weight of commercial vehicles. Among the weight-saving success stories that have been implemented in big rig technology over the past few years is the increase in the use of Metton, a mouldable composite material that is being used by an increasing number of OEMs.

“For heavy trucks, it’s now used in just about every outer body panel – hoods, bumpers, roof deflectors, chassis fairings. Those are the mainstream parts,” says Steve Ettore of Paramont Manufacturing, North America’s largest Metton moulder. “Basically, all the OEs are now using Metton, especially in North America. For example, Volvo uses it, truck makers in Japan have adopted it, and there has been a lot of interest from countries such as Brazil. The material has been in the truck and bus world for 10 years, with Volvo being the first truck maker to adopt it.” 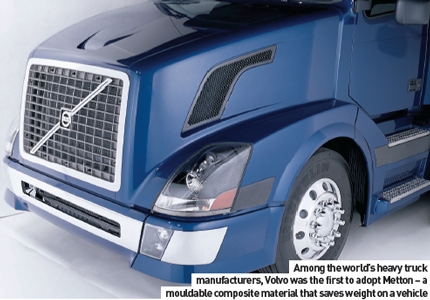 Much of the weight savings – roughly 35 per cent over traditional open mould fibreglass outer body parts – comes from the fact that Metton parts are made in a closed-mould process. “Prior to switching to Metton, we were using a lot of open mould fibreglass to make hoods, fairings, bumpers and roof caps,” says Rich Wailes, Engineering Section Manager, Outer Body Components for Paccar’s Kenworth Group.

“Open mould fibreglass has great tensile properties and it’s extremely strong, but it is expensive, it’s not dimensionally accurate, and it comes with a lot of weight because it doesn’t have a tool that controls the thickness during production.

During production – depending on the operator – they could get it really thick or really thin – you could end up with a part that weighs too much, or is too thin and might not carry the structural loads that are required,” he tells AMS.

Cycle times have been reduced

Open-mould fibreglass technology was labour intensive and had limitations in design geometry, according to Ettore.

“Operators with spray guns would spray the resin and the glass into a female mould. It had limited ability to create B-surface geometry unless you glass in reinforcements. But you’re not really controlling the B-surface geometry, and it’s actually a slow process – you need several moulds to make any kind of production volume, and you’re adding variation to the process because each mould is going to be a little bit different,” he explains.

Another relatively recent lightweight material Kenworth (and its cousins at other Paccar divisions) have been using for outside body panels is sheet moulding compound (SMC) – a fibreglass reinforced composite material that’s produced in sheet format.

In use at Kenworth since 1995, the OEM’s design engineers have been using the material in place of open mould fibreglass for larger parts, including roof caps and hoods. Kenworth’s Rich Wailes says that the material has good tensile properties (depending on the amount of glass contrent), an excellent Class A surface finish, and a “traditionally low part cost because you’ve got a high tooling investment.”

The material does pose some challenges for tool designers, including limitation in mould fl ow directions. “You need to design parts based on the compression. The way SMC parts are made, you put a charge to a matched piece of P20 tool steel and compress the material so it squeezes out across the surface of the tool. It really only cures best when it is being compressed. When you turn a corner and get into sheer situation, you’re not getting the same pressure and it may not cure as well.

“Another challenge is as it flows across the surface, you want your fibres to be randomly orientated relative to each other. But as the SMC material flows further away from the starting point, the fibres can start to align and become parallel, which reduces the overall strength of the part.” On the plus side, Kenworth engineers make good use of the material in producing interior components – “parts that we can’t produce with Metton because of off-gassing issues that can create unpleasant cabin odours,” says Wailes

Says Wailes: “In our pursuit of improving product quality, we started looking at Metton and closed mould processes which are more tightly controlled – you take the dependency on an operator out of the process.

It’s a closed mould system where machines and timers control the opening and closing of moulds, the injection pressures, and the quantity of liquid being added – all the operator is involved in now is aiding in part removal.”

With open mould fibreglass, Kenworth would have four or five people rolling out glass and resin trying to make a part consistently. Extremes in temperature – the cold of winter and heat of summer – would also result in unwanted variables in open mould production. “You can imagine different times of the year in plants across the United States, if you’re in South Carolina in the summer and trying to make open mould parts, you’ve got a seven minute window to get that part made. Moisture and temperature will cause those materials to cure at different times, depending on the season.”

According to Wailes, process cycles are lower with Metton. Temperature and humidity do affect cure cycles, but engineers are able to control these factors through computer controls and temperature gauges rather than by operator.

Another benefit of Metton, especially from a user perspective, is its low temperature impact resistance. In colder climates, if a chunk of ice or a stone hits a traditional ABS plastic or TPO truck component, the material doesn’t have the impact resistance to take that collision at cold temperatures (in the to -10 degrees C range). “If a stone or chunk of ice hits it, it is likely to break the bumper and your cost of ownership has now gone up,” says Wailes. “You’ve got a blemish in the best case scenario, and in the worst case, it could even put you out of service if the highway patrol decides your truck is unsafe. Metton prevents that type of cracking that can occur in cold temperatures.”

Another advantage of Metton is its Class A surface finish. The closed mould process used eliminates a lot of surface voids and pores that can result with an open mould process, resulting in a higher quality, highly consistent surface finish, “so your paint prep time goes down,” says Wailes. While commercial vehicle OEMs have been turning to the material to use for outside body panel requirements, it does create a few production challenges.

The challenges of using Metton

Process windows have to be carefully managed between the time a part is moulded to the time it’s primed and ready for paint, and paint adhesion is always a challenge with Metton. 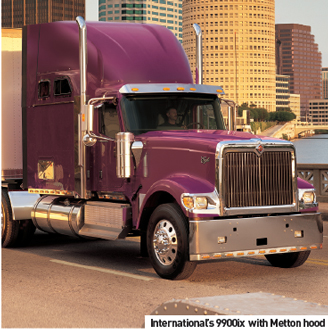 “You have to prime the part appropriately – we scuff the parts to prepare the surface for paint. We want to remove any oxidation that may have arisen on the part.” Metton is also not UV stabilised. It is sensitive to sunlight and if the parts are exposed to sunlight, it will degrade the part performance quality. For this reason, all Metton parts must have an appropriate thickness of paint applied that does not allow sunlight to penetrate.

Also, the tensile properties that make Metton so effective at low temperature impact resistance means that manufacturers can’t produce direct replacements for parts designed for other materials. “The material properties don’t necessarily align – you can’t make a Metton part by directly copying the tooling for a non-Metton part,” says Wailes. “You have to change some of the features to make the part more rigid than you would for a part made of fibreglass.”

Although Kenworth is using Metton on its T800, W900, T660, T2000 and the T370 trucks, its use depends on production volumes. “Low volume model parts might use open mould or sheet-moulding compound (SMC) material.

It needs to be financially feasible to make a part with a particular process. Traditionally, fibreglass tools cost less than Metton, which in turn cost less than SMC. But your part price is inverse – an open mould fibreglass part will cost more than a Metton part, and SMC costs less than Metton part. So if you are willing to invest more in your tooling, you can get your piece price down, but to invest more in your tooling means you need to have the volumes of sales to support it,” Wailes concludes.