The brand's global production footprint has grown substantially in recent years, including the US and China 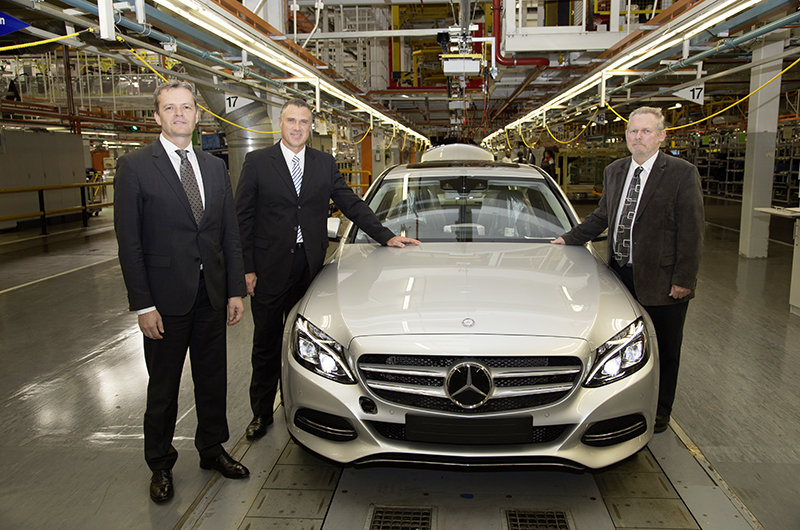 In recent years, the manufacturing geography of Mercedes-Benz has expanded in a major way outside Germany; it first moved into the US in the mid-1990s, since when it has also expanded its small operation in South Africa into an integral part of its global network, as well as growing substantially in China. In addition, it is establishing a full manufacturing facility in Brazil and has CKD operations in India, Indonesia, Malaysia, Thailand, Vietnam and Egypt. This review looks at each of the major geographic expansions in turn.

North America
In early March 2015, Daimler announced that the Mercedes van division would invest $500m in a new factory in Charleston, South Carolina, which will produce the next-generation Sprinter van for the North American market. The new plant, for which construction will not actually start until 2016, will have a bodyshop, paintshop and assembly line, with Mercedes using external pressings and stampings suppliers just as it does at its other US plant, in Tuscaloosa, Alabama.

The Sprinter already has a strong presence in North America, with a market share of close to 10% of the large-van market; the Sprinter is sold under both the Mercedes and Freightliner brands. In 2014, Mercedes sold around 26,000 Sprinter vans in the US, making the country the second-largest market for the vehicle outside Germany. The company has not yet provided details of the production volume for its new factory, although it would seem likely that capacity for at least 40-50,000 units will be installed, given the size of the investment and Mercedes’ ambitions for the US market.

The new plant will be Mercedes’ second light-vehicle factory in the US, adding to the Tuscaloosa factory which has been making SUVs since 1997, when production of the ML began. The R-Class crossover was added in 2005, followed by the GL, a bigger vehicle than the ML. In 2012, the plant began shipping kits of both the ML and GL for assembly in Mercedes’ CKD plants in Asia. For the last few years, production has been running at over 180,000 units a year, but this is due to rise to over 250,000, with the addition of the coupe version of the ML (which is to be renamed GLE) and the new C-Class. GLE coupe production started in late 2014, with C-Class output having begun in June 2014.

In order to release capacity for the expanded SUV and C-Class sedan and coupe line-up in Tuscaloosa, Mercedes has decided to move production of the low-volume R-Class to a contract manufacturer, AM General in Indiana. The R-Class is now sold only in China, but the low volumes involved – around 10,000 units a year – do not justify efforts to localise the production arrangements, especially the R-Class’s dedicated supply chain.

China
Here, Mercedes vehicles are produced in a joint venture factory with Beijing Automotive (BAIC). Production focuses on the long wheelbase version of the E-Class, plus the new C-Class and the GLK SUV. The compact GLA SUV recently joined the line-up, and capacity at the joint venture now exceeds 200,000 units a year. Mercedes models began production in China in 2006 with the E-Class; the C-Class was added in 2008, the long wheelbase E-Class (a vehicle only made in China) in 2010 and the GLK in 2011. 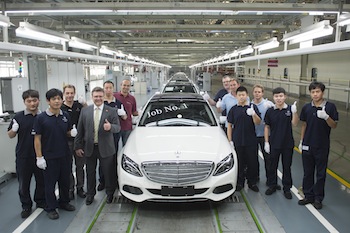 In addition to car production in Beijing, Mercedes now also operates an engine plant there. The OEM’s first engine factory outside Germany opened in November 2013 following an investment of €400m ($432m) and will produce up to 250,000 four- and six-cylinder engines per year. As well as supplying Mercedes’ growing car and SUV range produced in the country, this plant will also supply engines to the Fujian-Benz joint venture which makes vans.

The Fujian Benz plant in Fuzhou assembles the Vito, Viano and Sprinter with kits shipped from Europe, alongside some locally sourced parts. This factory opened in 2007 with a capacity of 40,000 units a year and is a 50:50 joint venture between Daimler and Fujian Motor.

South Africa
In 2000, after a period of supplying merely the local market, the Mercedes factory in East London became a fully integrated manufacturing operation and quickly established itself as a core part of Mercedes’ burgeoning international production footprint. The plant actually dates back to 1958, when a contract manufacturing arrangement with a South African company commenced operations; Daimler acquired a 50.1% controlling stake in 1984. Initial production focused on supplying the local market at fewer than 15,000 units a year and it was not until 2000 that export vehicles were made. Capacity is around 75,000 units a year, although only about 50,300 were made in 2013, the last year for which official figures have so far been released.

In mid-2014, the plant started production of the latest W205 C-Class, having been designated the main global supply point for right-hand drive models in sedan format; estate models will be supplied from Germany. As well as supplying the local market, the factory now ships vehicles to the UK, Japan, Australia and New Zealand. East London also made left-hand drive versions of the previous C-Class, some of which were shipped to the US, but the latter will now be supplied by C-Class sedans and coupes produced in Tuscaloosa.

Brazil
In recent years, Daimler’s presence in Brazil has been limited to trucks; the existing Brazilian factory at Juiz de Fora, Minas Gerais, had made the original A-class and the C-Class compact model until 2010, when production was terminated owing to low volumes. However, Brazil has been designated one of the four locations worldwide to share production of the latest C-Class.

In October 2013, the company announced that both the C-Class and GLA compact SUV would be made in Brazil from 2016, following an investment of €170m. An all-new assembly plant will be built at Iracemapolis, near São Paolo, with a production capacity of 20,000 units per year. The plant will employ around 600 people, with a further 3,000 jobs due to be created in the local supply chain. Construction of the factory began in February 2015.

In addition to the four full manufacturing operations described above, Mercedes has a network of CKD factories across Asia, and in Egypt.

India
Mercedes has operated a 10,000-unit assembly plant for many years. This plant at Chakan, near Pune, assembles the C-Class, E-Class, S-Class, ML and GL; reports in June 2014 suggested that Mercedes would build a second assembly plant in the country, doubling its capacity in India, although details of which models are to be made there have yet to be confirmed.

Indonesia
Here, Mercedes operates a plant in West Java at Wanaherang, Bogor. The facility has recently received a €30m ($32m) investment to modernise the assembly process of its two lines; one produces around 2,000 C-Class and 1,750 E-Class models per year, while the other makes around 400 S-Class and 350 ML- and GL-Class SUVs per year. 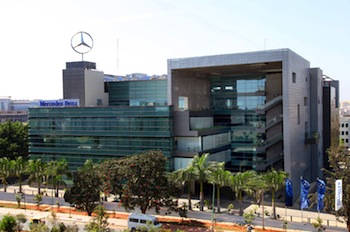 The rest of the world…
In Malaysia, Mercedes assembles some versions of the latest C-Class, while importing others; and in Vietnam, a few hundred S-Class models are also assembled.

In Thailand, Mercedes can assemble up to 19,000 vehicles following a recent investment of 20m baht ($611m), with the production line-up including the A-Class, C-Class, E-Class and M-Class.

The small Egyptian CKD facility had made a range of Mercedes models but the operation was severely disrupted by the Arab Spring and has yet to resume past production rates.