Measuring success at BMW, Opel and beyond

While BMW and GM have chosen a single optical metrology solution for many of their European plants, other OEMs have stayed with CMMs due to the relative advantages of contact over non-contact systems

Body-in-white (BIW) measurement has gone through significant changes over the last 10 years, with many of the heavy, stationary co-ordinate measurement machines (CMMs) generally located in separate areas away from the production line being replaced with highly-portable and flexible optical systems.

This has had a profound effect on how quality is maintained across the BIW process. Where as one body in every 10 or 100 might have been taken off the line for analysis in a measurement laboratory by CMMs, now robotic inspection cells can be placed adjacent to almost any production station.

The results of these changes are most apparent in the manual inspection areas, with the virtual elimination of experts with gauges checking gap and flush in a set test pattern. A further benefit of these new testing procedures has been realised in the realm of part design, the new technologies allowing vehicle exterior designers to be even more ‘daring’ with door and panel shut lines, clamshell bonnets, rear hatch construction, and mixed media; carbon fibre and other composites, aluminium and various steel combinations.

One of the most revolutionary changes in the DNA of a modern brand was BMW’s adoption of the designs produced by Chris Bangle. While the designer has since left the company, his ideas were incorporated across the entire range of BMW passenger cars and SUVs. Described as ‘flame surfacing’, the designs were executable in large part due to BMW’s use of 3D panel pressing technology.

This technique allows a single press to produce compound curves, which had previously needed multiple pressings unless the panel was built up from several parts. Whatever you may think of Bangle’s influence (he was superseded as BMW design chief in 2009), the end result has been a dramatic shift in the company’s design direction and subsequent demands on A-surface panel integrity.

BMW customers have high expectations when it comes to fit and finish across the company’s products. For the 5-, 6- and 7 Series, manufactured at the company’s plant in Dingolfing, Germany, BMW deploys state-of-the-art metrology. For example, when the current BMW 7 Series rolled out in 2008, the tactile measuring technology in use at the Dingolfing press shop was largely replaced with optical metrology systems.

Suppliers of this new technology include GOM (Gesellschaft für Optische Messtechnik). Numerous systems from GOM, in addition to those in the Dingolfing press shop, have been in use at BMW plants since 2003, covering all departments, such as design, tool manufacture, press shop and BIW construction.

The inspection cell used in the Dingolfing press shop is an interesting and innovative installation; the robotic automated metrology cell is positioned alongside Europe’s largest suction transfer sheet metal press. The cell, which operates over 24 hours, enables BMW to inspect sheet metal components of various sizes, from small lock plates to complete side panels.

The process allows six different components to be mounted at one time. A smart system for handling the mounting plans enables workers to complete assembly at speed. “The main advantage of the automated inspection cell is that it achieves higher throughput rates in industrial manufacturing – since a higher unit volume is handled in a shorter time and planning improves – as does reproducibility and, with it, process accuracy,” says Dr. Carsten Reich, head of the GOM Automated Inspection Solutions team.

Transparency from all angles 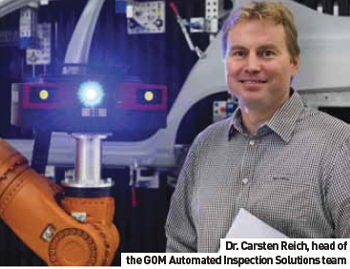 In the Dingolfing press shop, the automated inspection solution has already been used to support series production of more than six vehicle types. This brings several advantages, including fast root cause analysis; targeted correction measures and analyzes of the impact corrections could have on adjacent areas. This broad range of analysis work can be done without the need to take new measurements due to the full surface database that optical metrology supplies.

Other valuable returns include shorter component evaluation discussions and a clear overview of the results; divergences are graphically demonstrated using a colour chart. The system also takes less time to deliver analysis reports when compared with tactile (touch probe) measuring technology. Optical metrology collects more data in a shorter time, delivering reports based on full surface measurements rather than a limited number of single points as used by a tactile CMM. This means that components are fully inspected, leaving no area of the component ‘blind’ or unchecked.

In addition increased measurement capacity, optical metrology systems can operate independent of inspection plans, while also negating the need for program adjustments in case of component changes. This results in a significant improvement in component inspection throughput. Vital advantages are also found in batch analysis measurements.

With the full surface database allowing additional evaluations to be carried out whenever needed, a component series can be analysed down to its original status. Components can therefore be inspected at any surface point independent of inspection plans, without the need to take new measurements. This helps to minimize time needed for complex evaluations, using tools like inspection sections.

With its integrated evaluation software, the inspection cell also offers features to further assist operators. For example, any deviations in measurement results are visualized as clear colour plots, rather than reams of 2D digits that might delivered by a tactile CMM. Importantly, inspection reports that used to be several hundred pages long are now reduced to a single image, making it possible to ascertain any deviations from CAD at a glance. While green reflects the optimal state, the other colours – red, yellow and blue – indicate deviation levels. This makes it possible to immediately identify components that are less than perfect, while also highlighting where and why. It is also easy to import inspection plans for direct CAD data based measurement planning for inspection of features such as surface, trim and spring, and hole pattern.

Another positive aspect of all optical metrology systems in use at BMW is high transparency, as the GOM 3D result viewer operates on hundreds of computers throughout the group and, in addition, resides on BMW’s internal network server – along with 28,000 completed metrology projects. All BMW operators can access this information, together with the relevant departments, helping to save time in component evaluation discussions. This way 3D data can be archived rather than having to store the physical components.

The virtual measuring room – online and on target

Another major step towards achieving further time savings is the rollout of the new VMR (Virtual Measuring Room) software module for offline teaching and programming. GOM’s VMR makes it possible to virtually design inspection cells based on real requirements, such as available space and existing dimensions. This is particularly relevant to carmakers like BMW, where sophisticated designs need to be proven as ‘manufacturable’ before any metal is cut.

Robot models and kinematics, sensor settings, components and attachments can be integrated into the software, along with CAD data and inspection plans. Each virtual inspection cell maps the functions of the real inspection environment, making it possible to analyze space requirements, component positioning and accessibility.

Thus, workers at the Dingolfing press shop are able to save time while inspecting new components. The VMR dispenses with the need for programming on robot control consoles, since robots are moved offline in the software.

This innovative programming is supported via a concept known as ‘guided teaching’: the software gives operators immediate feedback on whether holes, slots, trim and spring, CAD surfaces, etc., are recorded correctly from a specific robot position. The synchronization of digital and physical aspects replaces the need for complex online robot teaching.

Dr. Carsten Reich sums up the advantages of optical metrology across the press shop and BIW: “Component deviations can be analyzed at speed, corrections integrated into the elimination process without delay, and components precisely prototyped during product development. Since the automotive industry sees optical metrology systems, including automation and standardization, as the future solution for the evaluation of sheet metal components, other plants have already integrated this standard in their production processes.”

While non-contact measurement and body component verification spreads through the industry, many applications are still best served by ‘conventional’ CMM machines. To enhance the performance of these devices, one company has been continuously developing software packages since 1975 in order to improve productivity, accuracy and repeatability in CMM measuring.

As Dr. Kai-Udo Modrich, Director of Software Development at Carl Zeiss told AMS: “Achieving reliable measuring results requires maximum functionality and perfect compatibility of the measuring machines, software, sensors and controller. To obtain a high level of productivity, the software in particular must be able to record many details and process them quickly. It should also be easy to use and intuitive.”

As any body engineer will explain, ‘freeform’ surfaces pose a special challenge to measuring software. Because of the part geometry, which includes various overlapping surfaces, openings, boreholes, etc., the software must be able to interpret the values of various contact and optical sensors, while results are displayed clearly on-screen and in logs.

The latest offering from Zeiss is its CALIGO suite, a modular system architecture using the latest software development technologies to help ‘future proof ’ the product.

As car body measurement is notable for the many challenges it presents, until the process has been optimised a wide range of items have to be checked, often very quickly and in large quantities. Then there are also the variations and design changes to deal with. Good car body measuring technology must be able to keep pace with these challenges and be adaptable, as Modrich explained: “We listened to our customers’ experiences and implemented them into CALIGO.” 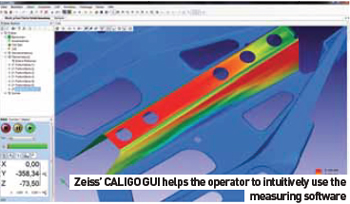 The system accelerates programming with intelligent functions such as change management using feature lists. During data synchronization, users receive a summary of what has changed, enabling them to decide which changes to accept. This functionality improved response time and flexibility, while integrating modified items into individual measuring process without additional delay. This means that productivity can be increased in analysis and serial measurements. 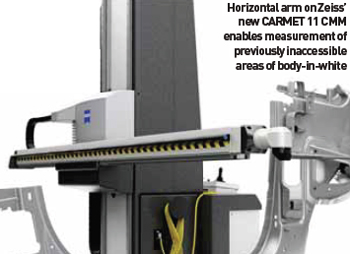 Carl Zeiss’ CMM machines offer a device particularly suited to suppliers and manufacturers in the automotive industry, a new horizontal-arm measuring machine known as CARMET 11. This CMM has a weighted measuring arm, offset by a balanced counterweight housed inside the column. There are two cable pulls on the counterweight and a new drive system using pre-stressed friction drives.

The Z-column features a trapezium-shaped structure, while the horizontal arm design makes for easy loading, with free access to the measuring position, most important with complex components. The sensor carrier can hold extensions up to 350mm in length, meaning that even hardto- access areas can be measured. In addition, two machines can be configured as a duplex system, increasing the Y measuring range or allowing parallel measurements in two different positions on one component.