Champagne corks popped in Leipzig in October 2017 as BMW celebrated the manufacture of its 100,000th i3, which features a monocoque made from light and stiff, but expensive, carbon fibre-reinforced plastic (CFRP). Yet, despite a positive critical reception, the hybrid-electric vehicle has not exactly been a runaway success in terms of sales since its introduction in late 2013, probably owing to its high price in comparison with its competitors. So what does this mean for the use of CFRP in mass-market vehicles? Is there a case for carbon fibre?

The launch of the i3 turned many heads in the automotive industry. Dale Brosius, chief commercialisation officer at the US Institute for Advanced Composite Manufacturing Innovation (IACMI), a national organisation established in 2015 to develop production technologies for the cheap, energy-efficient manufacturing of advanced composites, has been following BMW’s work with CFRPs closely.

“It was a significant milestone as it changed the conversation about carbon fibre in automotive,” he says. “To that point, carbon fibre was reserved for racing vehicles, supercars, and to some extend mid-to-high end sports cars, such as Chevrolet’s Corvette. The i3 is none of these, and the fact that CFRP was used so extensively in the vehicle surprised many in the industry – here was this big OEM investing big money in a supply chain to commercialise carbon fibre on a commuter vehicle.”

BMW and its partners, primarily German carbon fibre producer SGL Group, spent something in the region of $1 billion securing the supply chain for the CFRP used in the i3 and its sporty stablemate, the i8. This investment included what is reported to be the largest carbon fibre plant in the world, in Moses Lake, Washington, US, and a number of sites in Germany; namely a factory for the manufacture of carbon fibre laminates in Wackersdorf, sites for production of CFRP parts in Landshut and Leipzig, and, of course, the Leipzig assembly line.

“The i3 serves a relatively small niche, and almost certainly BMW doesn’t make money on the vehicle,” Brosius continues. “I think BMW makes about 1.9m vehicles per year, so 30,000 i3s is not significant. The design of the i3 is not particularly mass-optimised; even BMW will admit it is overdesigned, but had to make certain compromises in order to get it into production.” 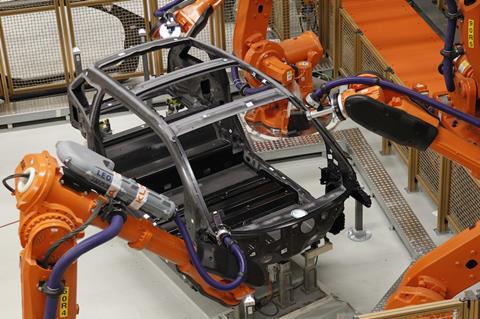 Indeed, the carmaker had significant production issues in the first year or so of the i3’s manufacture. But pioneers suffer such problems, and the lessons it learned, and the investments it has made, have allowed BMW to implement CFRPs in a more limited, but more affordable fashion in its higher-volume vehicles, such as the 7 Series, some 70,000 of which are manufactured each year. In 2015, the carmaker announced that, in this luxury sedan, CFRP would be used in key components that affect the torsional stiffness and crashworthiness of the vehicle’s passenger cell, such as for the roof bows, to reinforce the roof frame, the B- and C-pillars, the sills, the centre tunnel and for the rear shelf. In total, some 15-20kg of CFRP is used in its mixed-material (steel and aluminium are also present) ‘Carbon Core’ body structure.

“By doing so, [BMW was] able to replace much of the heavy steel with lighter gauge steel and aluminium, lowering the overall mass of the vehicle by a significant amount – over 100kg,” says Brosius. “In this case, carbon fibre serves as an enabler for other mass reduction. This multi-material approach is true ‘intelligent lightweighting’.

“Key to this strategy is the ability to integrate carbon fibre into the traditional assembly line process, including the high-temperature electrocoat needed to protect steel from corrosion. This requires high-temperature plastics like epoxy. BMW also sped up the manufacturing processes for what, overall, are simpler shapes than those used on the i3 and i8.”

At its Dingolfing plant, BMW uses two production processes that it claims are economical for the production of up to several thousand CFRP components per day; wet pressing and hybrid pressing. In wet pressing, carbon-fibre fabrics or netting impregnated with resin are pressed in a moulding die while wet, and are then cured, eliminating the need for the dry preforming step employed in the resin transfer moulding (RTM) processes used for the manufacture of the i3’s monocoque. In hybrid pressing, carbon-fibre fabrics impregnated with resin, also still wet, are placed in a moulding die with sheet steel, then pressed and hardened. This bonds the steel and the CFRP together to form a hybrid component which is both light and stiff.

BMW is not alone in adopting CFRP in a mixed material approach. Its German competitor, Audi, is using the material to produce the rear wall of the spaceframe for its A8 luxury sedan. This part provides around 40% of the vehicle’s overall torsional rigidity, making it a suitable candidate for manufacture with CFRP. The part is some 50% lighter in weight than its metallic predecessor. Some 25,000 A8s were manufactured in 2016.

For the rear wall to absorb longitudinal and transverse loads, as well as shearing forces, between 6-19 layers of carbon fibre are placed one on top of the other using a process Audi has developed in partnership with German multinational Voith, called the Voith Roving Applicator (VRA). Audi has been working with Voith on composites since 2011.

The VRA uses untreated rovings – long, narrow bundles of fibre – and binder powder to produce a net-shaped dry stack in four steps: the roving is spread and formed into a 50mm-wide tape; a binder is applied to the tapes; the width of the tape is checked; and the tapes are placed on a rotatable and movable table by several pairs of grippers.

This process results in the assembly of a near-net-shape preform, featuring local reinforcements that can be placed at any angle in any area. This means that it is adapted to the mechanical loads likely to be applied to the final part.

The VRA is scalable – the lay-up rate can be increased by a factor of two by doubling the number of grippers and several units can be placed in parallel upstream tape manufacturing lines, which are more efficient in comparison with standard dry-fibre placement machines.

In addition to increasing the production rate, Voith says the VRA can also be used to reduce production costs. Cheap, untreated rovings and binder are used and can be processed into a useable preform in one step – without the need for costly intermediate steps or semi-finished products, and with almost no waste.

This dry stack is then shaped using an automated stamp forming step before being consolidated using a low-pressure RTM process. The curing time for this process is less than two minutes. Milling is then carried out before the part is ready for assembly.

The CFRP rear panel – already fitted with all components and subassemblies, including the loudspeakers, the rear louver, the three-point seat belts and the centre armrest – is installed in the car during final assembly. An employee uses a handling device to pull the rear panel through the rear window cut-out and into the body.

A two-component structural adhesive, which prevents contact corrosion, is used in conjunction with manually installed rivets to join the rear panel to the surrounding metal components.

It is clear that the materials and technologies required to get CFRPs into high-volume applications have come on in leaps and bounds over the last five years or so. Brosius says: “The big technical enablers have been faster manufacturing processes for parts, due to increased automation and more reactive chemistry, augmented by slowly declining carbon fibre prices. Add to this improved modelling and simulation capabilities that enable more confident design for fatigue, crash and other loads.

“From an organisation standpoint, the supply community is making investments in developing new materials and processes to address evolving needs, which require new talents among staff.”

So which carmaker will be the next to make extensive use of the materials? There are rumblings that Hyundai’s Intrado crossover concept maybe due for commercial release in 2018. And IACMI-backer Ford is eying the use of CFRP in structural applications, a fact illustrated at JEC World in Paris, France, in March 2017. There, Magna International presented a prototype CFRP subframe that it has designed with the carmaker. Intended for use on a C-segment vehicle – such as Ford’s US Fusion model – the subframe is 34% (or almost 10kg) lighter than a stamped-steel equivalent. 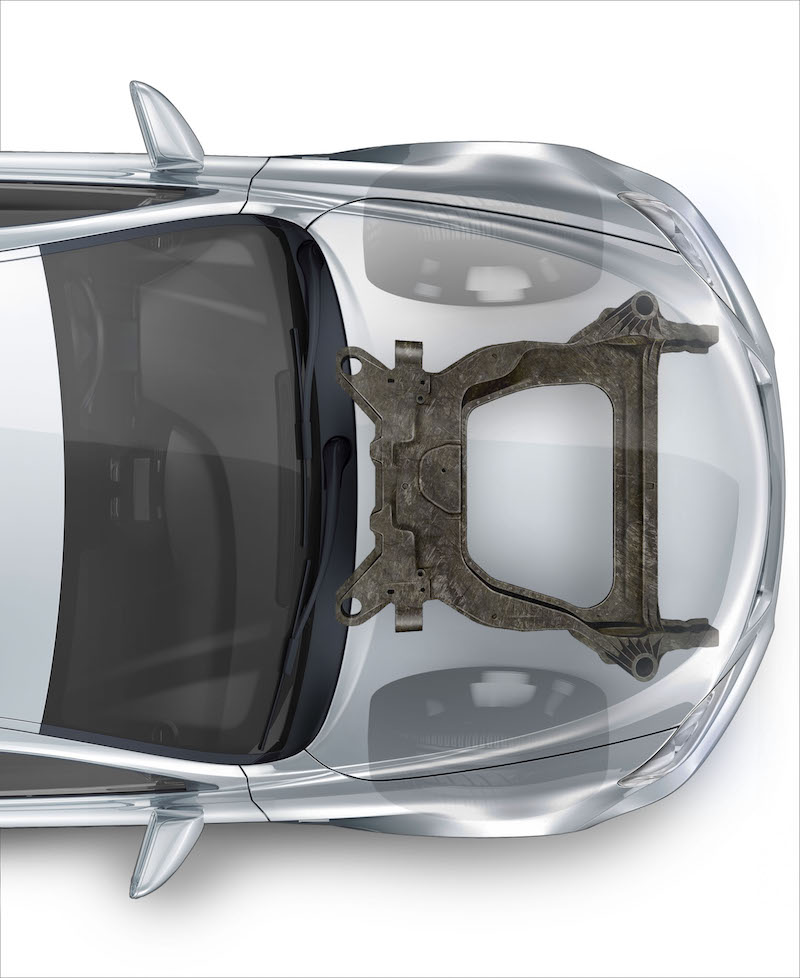 Magna says it has produced a viable CFRP chassis component

The president of Magna’s Exteriors business, Grahame Burrow, says: “Of course, lower overall vehicle mass leads to improved fuel economy, but additionally vehicle dynamics are improved as mass is reduced at the front end of the vehicle. As a result, the fore/aft weight ratio moves closer to the optimum 50:50 distribution. Key performance metrics, such as noise, vibration, ride harshness, durability and safety are equal to, or better than, a conventional steel subframe.”

According to Burrow, Magna started working with Ford on this programme in mid-to-late 2016 and the two companies have jointly developed the concept and tooling.

He says Magna brought the tooling into its facility in February 2017 and has started to produce demonstration parts. “We are close to fully validating the target three-minute cycle time, aiming for 200,000 parts per year. The process is easily scalable,” Burrow continues.

The CFRP subframe comprises two moulded parts made from CFRP and four metallic insets – an 87% reduction in component count in comparison with the 45 metallic parts required for a standard steel subframe. These moulded parts are made from sheet moulding compound (SMC), which is compounded by Magna using chopped 50k carbon fibre. Rather than the epoxy resin conventionally used in structural CFRP parts, the matrix used in the SMC is a vinyl ester modified in-house. The Magna team says vinyl ester adheres well with the carbon fibre, and its low viscosity enables it to wet-out the reinforcement effectively, which can be challenge with 50k fibre.

“Using this multidirectional fabric and this modified vinyl ester system provides a boost in material properties where it is needed in the subframe,” says Burrow. “This allows us to mould a complex geometry, and to increase properties.”

The mouldings are joined using adhesives and structural rivets, although Magna points out that in future this function could be fulfilled using a polyurethane (PU) adhesive alone.

The design has passed all performance requirements based on computer-aided engineering (CAE) analyses, and vehicle-level testing is underway at Ford. This testing phase will evaluate corrosion, stone chipping and bolt load retention, which are not currently measured by CAE.

While the extensive use of CFRP, as seen on the i3, maybe prohibitively expensive, the material certainly has a place in mixed material construction. But what of future cars, which are likely to be electric and increasingly autonomous?

“This one is hard to determine,” says Brosius. “One has to assume that autonomous vehicles will be equipped with pretty sophisticated electronics – able to sense danger and avoid collisions. On the one hand, this may allow designers more freedom to use composites, which have the perception of being difficult to predict in a crash. On the other, depending on the costs and density of battery storage, metal vehicles may provide sufficient range of operation.

If, as some have postulated, battery densities have reached something close to theoretical maximum, but costs can keep coming down, a vehicle producer could just opt to add more batteries to overcome the added weight. Or, use lighter materials to extend range. It will depend on the particular situation.

“One positive for composites is the ability to design shapes that might be more functional for driverless vehicles, and have more rounded profiles. In any case, the manufactured cost will play a big role in what material mix gets used.”