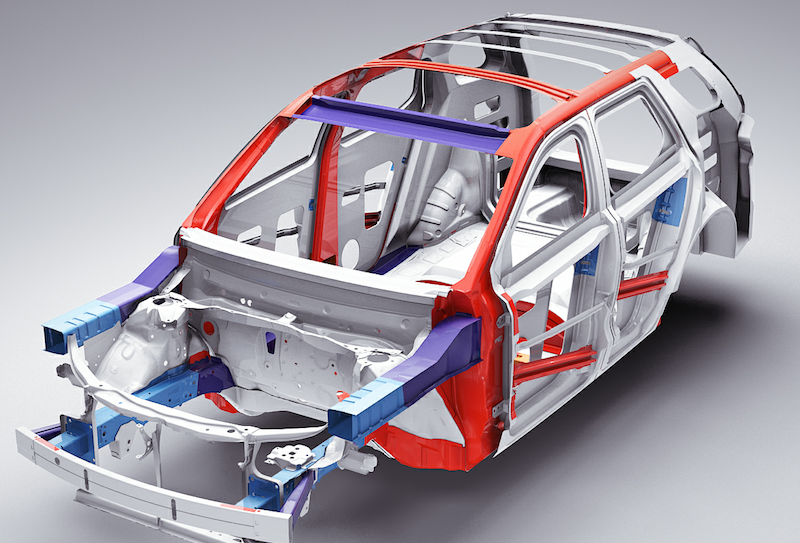 Hot forming has become very important to the automotive industry as a way of meeting specific crash-performance criteria and ensuring low overall weight at an affordable cost. OEMs worldwide use the process to produce structural automotive parts such as B-pillars, roof frames and bows, bumpers, stiffeners, sills, and cross-members. In the recently launched XC90, Volvo used ArcelorMittal’s current hot stamping products (Usibor 1500 and Ductibor 500) in 40% of the vehicle’s body-in-white (BIW). By comparison, other OEMs typically use PHS for 20-30% of their respective BIW.

With the introduction of these second generation PHS steels, OEMs will gain access to the materials they need to reduce vehicle weight even further. In turn, this will give them the design freedom they need to create lightweight mobility solutions. ArcelorMittal’s recent S-in motion projects for mid-size sedans and SUVs are an example of how weight savings of up to 26% are achievable for the BIW compared to existing grades. 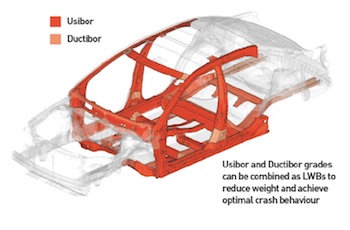 An aluminium-silicon coated advanced high-strength steel (AHSS), Usibor 2000 is more than 30% stronger than its predecessor Usibor 1500. According to Jean-Luc Thirion, head of ArcelorMittal Global R&D for automotive: “Usibor 2000 could typically bring 10-15% weight savings when compared to existing hot stamping solutions.”

Applications for new gradesUsibor 2000 can be used for monolithic parts or as laser welded blanks (LWB) in combination with Ductibor 1000. When used in monolithic parts, Usibor 2000 is suited for applications where deformation must be avoided. Usibor 2000, an aluminum-silicon coated PHS and stronger than its predecessor Usibor 1500, enables automakers to fabricate parts with complicated geometry at a very high strength without formability or springback challenges.

Typical applications for Usibor 2000 include strength-critical passenger compartment parts such as rockers, pillars, roof rails and cross-members. Usibor 2000 is currently available in Europe for OEM qualifications and will be available in North America in early 2017 with commercial production expected in late summer 2017.

Ductibor 1000 is optimised for monolithic parts which require higher ductility than Usibor 1500 can provide. Ductibor 1000 is also used to save weight on energy absorption applications. Typical examples include front and rear rails.

Combining grades in LWBLaser welded blanks give carmakers an opportunity to further optimise their vehicles by combining different grades of PHS to ensure the right steel is in the right place. This reduces the weight of the part significantly while improving safety and crash performance. The properties of Ductibor 1000 complement those of Usibor 2000 when the two steels are combined into a single LWB. The LWBs created from this combination of steels offer several significant advantages including weight savings, improved crash behaviour and cost savings through material and manufacturing optimisation.

Direct support to OEMsIn 2016, ArcelorMittal and Chrysler used LWB technology and refined the side structure of the 2017 Chrysler Pacifica. The new structure is the result of 36-months of R&D, 2,000 engineering hours, and approximately 300 design iterations. The result is the world’s first five-piece, hot-stamped laser-welded door ring, combined with a hot stamped B-pillar. The Insurance Institute for Highway Safety (IIHS) in North America named the new Pacifica as its Top Safety Pick+ for 2017, the only minivan so-designated. The new part brings significant advantages for Chrysler including:• Weight reductions of 8.64 kg• Part consolidation• Material cost reduction• Improved part performance• Simplified manufacturing process.

Volvo’s new XC90 SUV makes extensive use of hot-stamped PHS grades such as ArcelorMittal’s Usibor 1500, the strongest steel currently available to the automotive industry. In fact, 40% of the Volvo XC90 is made up of PHS – the highest level in any vehicle on the road today. The extensive use of PHS has helped to qualify the XC90 as the Euro NCAP Safest Car 2015. In North America, the XC90 won the Top Safety Pick+ award from the IIHS.

In 2014, Honda unveiled the industry’s first hot-stamped, laser-welded door ring for the Honda Acura MDX. This innovation, developed together with ArcelorMittal, significantly lowered the weight of the door ring while bringing improvements to the vehicle’s safety performance.

Investment programme for cold formingArcelorMittal is investing in AM/NS Calvert, its joint venture with Nippon Steel and Sumitomo Metals Corp in Alabama, US, to produce 3G AHSS cold-stamping steels in North America. Currently available as Fortiform in Europe, these high formability (HF) steels provide strengths similar to the strongest dual phase steels, but with higher ductility and cold formability. ArcelorMittal will produce cold-rolled and galvanised/galvannealed versions of HF 980 and HF 1180 in North America, targeting OEM qualifications by mid-2017. Commercial production, beginning with the cold-rolled grades, will occur in late 2017. These HF grades are particularly suitable for components limited by energy absorption, such as front and rear rails and upper motor compartment rails. In Europe, an investment programme is underway at ArcelorMittal Gent and ArcelorMittal Liège in Belgium, to increase ArcelorMittal’s annual European production of 3G AHSS.