The underlying electronic and software control architecture of any manufacturing installation is crucial to its operation and requires periodic updating to ensure continuing effectiveness. Mike Farish reports 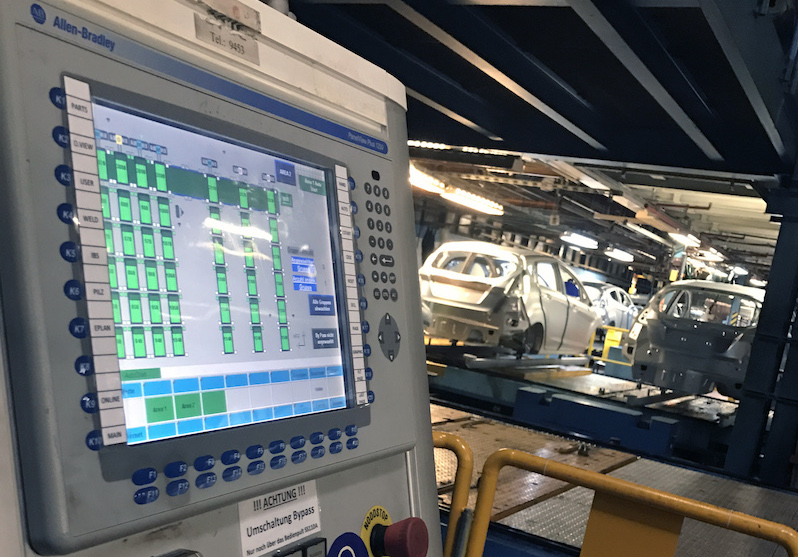 This was the case recently when Ford needed to relocate and recommission a storage facility with over a hundred conveyors in Cologne, Germany. The car maker collaborated with Rockwell Automation to change the previous, now redundant, control infrastructure, replacing it with a new configuration utilising the Modular Control Program (MCP) protocol that is commonly used in automotive industry applications running on an Allen-Bradley Logix-based architecture.

MCP is a modular programming and control solution that is currently deployed in several locations around the world. In some installations it runs complete automotive plants, including facilities management and final assembly. Its architecture means it can easily interface with other systems and make use of existing legacy communication buses. Similarly the Logix programmable controllers are indifferent to the sources of the data they process and can interface with multiple third-party devices and networks. In this instance the new installation is running on an Allen-Bradley ControlLogix controller connected to the same supplier’s POINT I/O modules via EtherNet/IP with a PanelView Plus graphic terminal supporting feedback and operator interaction.

All this helped facilitate rapid project completion. It took two Rockwell engineers three and a half days to program the first series of conveyors in the new installation to basic operational level. A day later, a local systems integrator came in and in the space of a single weekend was able to get the installation fully commissioned. Holger Adam, global technical consultant automotive industry and team leader at Rockwell Automation Germany, explains that the success of the project derived from both the modernity of the technology and previous work between the system supplier and car maker. “We did a proof of concept at a Ford plant a few years back and our knowledge from that installation made a big difference,” he says. “The line is now up and running and has subsequently been extended and we are also finalising, polishing and wrapping up the code library for future projects.”

Meanwhile David Green, supervisor controls and standards, body construction and sponsoring engineer for the project at Ford Cologne, adds that the conveyor system at Cologne handles over 1,800 units per day so avoidance of downtime and reliable interfacing with any other system is critical. He also confirms the importance of MCP to the project. “MCP is standard across Ford and ensures all our conveyor systems operate in exactly the same way wherever it is introduced, which means that we can rotate our personnel and still have the same level of expertise,” he states.

Meanwhile, one company at the tier supplier level now looking to upgrade its shopfloor manufacturing operations by automating the supporting data collection and management systems is Titan Motorsport & Automotive Engineering in the UK. The 70-strong company operates a battery of around 15 CNC (computer numerical control) milling machines as the core of its business supplying both its own and customer-designed products that include engine parts, oil systems, differentials and steering units. According to IT & supply chain manager Mark Martin, clients have now broadened from an initial number confined to the highly specialised motorsports sector to include others involved in the production of high-performance on-road vehicles. The identities of the latter, however, remain confidential with one exception – well-known UK-based vehicle engineering company Ricardo which named Titan its 2017 Supplier of the Year.

Nevertheless, external praise has not produced internal complacency and, as Martin confirms, Titan is now exploring the potential of enhanced data acquisition and management techniques to improve its shopfloor operations, in particular machine utilisation. He explains that the origin of the digital data that ultimately drives the company’s CNC manufacturing procedures is a combination of the Autodesk design package with the Edgecam machine tool programing system. The resulting machining instructions are then communicated to the actual production equipment via a system called DNC provided by local manufacturing software specialist Cambridge Numerical Control. But the DNC system is more than just a dumb link. Instead, Martin explains, it combines physical communications with a software element to enable programing information to be downloaded in a graduated manner where necessary that can reconcile the data intensity of some programs with the limited memory on older machine tools. “Five-axis programs especially can be huge,” he explains. It is, though, a well-established part of Titan’s resource portfolio. “We have had it for quite a few years,” he confirms.

Right now, though, Titan is getting to grips with another system from the same supplier called MDC-Max - with those first three letters standing for machine data collection – intended to tackle a perception that it is not quite getting as much out of its machine tools in terms of actual production intensity as it could do. As Martin explains that until now, the company “has run a finite scheduling system as part of our ERP package and that plans the load on the machines.” But, he continues, while that works well as a way of allocating work to individual machines it cannot monitor the actual machine usage - in other words, whether a machine is actually running or lying idle at any particular time. Therefore, the aim is “to understand machine downtime and improve efficiency.”

As Martin notes, this requirement is particularly acute for Titan, more because of the nature of its business as a highly variegated automotive supplier than the specific technical demands of the products it makes. “We have a complex mix of jobs and customers from long-running orders to prototype work,” he states. The consequence is that the company cannot “productionise” – in other words optimise – its operations in the way that another supplier might with high volume production of a single component. Martin says: “We are probably running about 3,000 machining operations in our plan at any one time even if they are not all simultaneously live on our shopfloor.” The aim, therefore, is to construct a system that can integrate and reconcile relevant data about both “planning” and “what is actually happening” on the shopfloor where machining actually takes place.

Interestingly Martin adds that interfacing MDC with the production equipment is generally not a particularly difficult task. He explains that modern machine tools usually carry an ethernet card that provides an immediate plug-in point, while older machines can be appropriately retrofitted quite easily. At Titan the system which runs on the company’s central server installation is currently being trialled on the two latest additions to its roster of manufacturing equipment – a 5-axis Doosan machine and a Hass VF2-SS milling machine.

After barely a month of operation, Martin could report that the new set-up was starting to provide some valuable feedback. It had identified “inspection” as a bottleneck. The reason for this, he continues, is the increasing complexity of the machining tasks being presented to the company by its clients, particularly from those in motorsports but also in prototyping work for more mainstream clients. In turn, designers are increasingly making assumptions about possible product geometries on the basis of their experience with additive manufacturing techniques rather than more conventional machining. It is not unknown, Martin adds, “for us to get something that simply cannot be made the way it has been designed and therefore we have to engineer it in a way that is acceptable to the client but can also be physically machined.”

As such, the company’s drive to ensure the quality and consistency of its machining operations is just about to receive another enhancement with the introduction, “before the end of this year,” of another software package from Cambridge Numerical Control called NC-Base. Martin reveals this product is a “standalone database” that will be loaded with Edgecam machining information to provide the company with an unprecedented degree of “version control” of the multiple programs its needs to have readily available to cope with a rapidly changing order situation. Martin says that the key issue in this case is the way that individual programs can be subject to further amendments on the shopfloor after they have been initially created in the Edgecam system by office-bound engineering personnel.

Actual machinists, he says, will almost inevitably bring some further specialist expertise to the program while it is being tried out before the start of real production operations such as a particular choice of tooling, but this has to be recorded precisely not least to ensure all quality-related traceability requirements are satisfied. “It is effectively engineering change control for a program rather than an item,” he states, adding that the new system will then ensure that any such amendments take advantage of individual human know-how are nevertheless still approved centrally before they can be released generally. In technical terms, he adds, “we are going to replace previous file systems with a database that should ensure we will never use a program in error.”