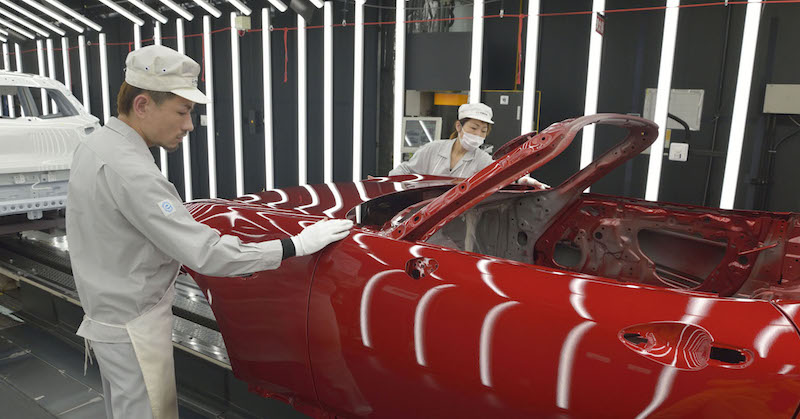 With a 2016 production volume of just under 1.6m vehicles worldwide, of which nearly 977,400 were made in Japan and just over 608,600 were made overseas, Mazda is one of the smaller Japanese vehicle companies. However, despite its relatively modest scale compared to the giants of the industry such as Toyota, it has managed to grow production and sales in recent years.

Recent expansion in or changes to production arrangements in Japan include the following: in March 2017, Mazda announced it had added production of the CX-5 crossover SUV at Hofu, in addition to the Ujina plant where production started in 2016. The second assembly line was added in response to rising global demand for this vehicle, which is currently especially strong. Having been launched in Japan in February 2017, the new vehicle sold over 16,600 vehicles in the first month, or around seven times what Mazda was targeting.

In December 2016, Mazda began production of the CX-3 sub-compact crossover SUV at Hofu plant No.1; this is the third production site to make the CX-3; production had begun in December 2014 at Ujina plant No.1 and in Thailand in October 2015. Adding the CX-3 to the Hofu plant’s portfolio freed up capacity at Ujina, which also makes the CX-5 and CX-9. Although these vehicles have very different sizes, Mazda’s production systems’ flexibility, as well as its ‘Bundled Product Planning’ and ‘Common Architecture Concept’ (ie. Mazda’s approach to platform engineering) meant that adding the CX-3 at Hofu went ahead very smoothly. This was also part of a plan for as much as 50% of Mazda’s overall production to be of SUVs by March 2019.

Expanding production outside JapanOutside Japan, Mazda last year announced it would expand the capacity of its engine plant in Thailand to 100,000 by the first half of 2018. In parallel with engine assembly capacity being increased, Mazda will also add machining capability with the same capacity as that of the engine assembly plant. Currently Mazda’s Thai factory, which started production in October 2015, can make 30,000 of the SKYACTIV 1.5-litre diesel engines and 1.3-litre gasoline engines. These are shipped to Mazda’s AutoAlliance factory in Thailand for fitting into the Mazda2.

The expansion will involve investment of 22.1 billion yen ($189.9m) and the new plant will expand its engine range, adding the 2.0-litre gasoline version of the SKYACTIV range. Engines will also be exported to Mazda assembly sites in Malaysia (CX-5 production) and Vietnam (CX-3 production) when the enhanced capacity is on stream.

Diesel engines offered in the USDespite the damage to the reputation of diesel powertrains, in the US especially, following the Volkswagen diesel scandal, Mazda has launched a new version of the CX-5 crossover with a diesel engine; in fact the 2.2-litre SKYACTIV engine is the first diesel offering from Mazda in the US. Launched with claims that it is one of the most fuel-efficient and quiet vehicles in its class, it will be interesting to see how far this gives a notable boost to Mazda’s sales in the US later in 2017, the production launch having taken place in Japan in November 2016.

Although announced to much fanfare in the US, it has taken Mazda more than five years to get a diesel engine ready for the US market, having indicated as long ago as 2012 that it would do so to bring down its average fuel consumption figures. Mazda had wanted to add a clean diesel to its line-up as an alternative to what it saw as unduly costly petrol hybrids which other companies were developing to bring down fuel consumption figures. The various diesel configurations Mazda offered to the US market were rejected by dealers and consumer clinics and it was not until recently that the company found a solution.

Creating a diesel with the right torque, performance and fuel consumption figures involved adding a urea-based selective catalytic reduction treatment that cleaned the exhaust of nitrogen oxide. Interestingly, although diesels account for around only 8% of the market in Japan, diesels represent over 35% of Mazda’s sales in Japan, with diesels offered on the Mazda2 (Demio), Mazda3 (Axela), Mazda6 (Atenza), CX-3 and CX-5. Out of the approximately 1.6m Mazdas sold worldwide in 2016, just over 285,500 were diesels, or around 18%.

Mazda’s production network in JapanMazda operates three main sites in Japan. Its headquarters are located in Hiroshima, with two car factories, Ujina 1 and 2 (with a combined capacity of 560,000 units a year); Ujina 1 made the CX-3, CX-5 and C-9 crossovers, as well the Premacy, Biante, Bongo and Roadster (MX-5) for Japan and a version of the roadster for Fiat; Ujina 2 makes the Mazda5 and CX-5. Gasoline and petrol engines and manual transmissions are also made in Hiroshima.

The Miyoshi plant makes gasoline engines and the Hofu plant in the south-west of Japan which has two car plants (with a combined capacity of 420,000 units per year); these factories make the Mazda6 in one and the Mazda3 and Mazda2 in the other. In addition, this operation makes some manual transmissions and is the sole Mazda site in Japan for automatic transmissions. In addition, the independent company, Press Kogyo makes the Mazda E-series truck (also known as the Bongo Truck) in Onomichi.

In Mexico there are plants in Salamanca, Guanajuato, opened in January 2014, making the Mazda2 and Mazda3, and a version for Toyota; production totalled just over 213,000 in 2015/16. In Vladivostok, Russia, Mazda has a 50-50 joint venture (JV) with Sollers for the CX-5 and Mazda 6 In China, Mazda has three JVs: one with FAW in Changchun to make the Mazda6 and MPV (although Mazda has no share in this operation); and two in Nanjing, one with Changan to make the Mazda3 and CX-5 (in which Mazda has a 50% stake); and with Changan and Ford to make engines, in which Mazda has a 25% stake. The FAW JV produced around 73,400 vehicles in 2015/16, with around 161,500 made at the Changan Mazda JV in the same year. 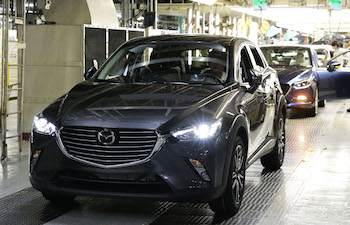 In financial terms, Mazda’s turnover has grown consistently in the last few years to over 3.400 billion yen in 2015/16

In Taiwan, Mazda has licensee production of the Mazda6 to Ford Lio Ho, in which Ford has a 70% stake, but Mazda no stake. In Thailand, Mazda has two plants, a powertrain factory making transmissions and engines (see expansion details) and a 50-50 JV with Ford, AutoAlliance in Rayong. This plant made just over 126,000 of the CX-3, Mazda2 and Mazda3 cars and the BT-50 pick-up truck in 2015/16. There is a small licensee plant in Vietnam, which made less than 3,000 vehicles in 2015/16 and a small plant in Malaysia (in which Mazda holds a 70% stake) which makes the Mazda3 and CX-5. In Ecuador, there is also a very small kit production facility – MARESA – which made less than 1,700 vehicles in 2015/16, having made over 11,300 in 2012/13; a small number of Mazda vehicles were also made in Ford’s South African plant until 2015 but this has now stopped.

Balancing the booksMazda’s recent financial results have not been especially good; in the last quarter of 2016, it saw its operating profit fall by 71%, largely due to foreign exchange losses in the light of modest unit sales. Operating profit for the quarter fell to 13.7 billion yen ($117.3m), down from 47.5 billion yen in the same quarter a year earlier. Vehicle sales fell in North America, its biggest market, to 107,000 units, with sales also falling in Japan and Europe. In China, however, there was a different story, with sales up 38% to 94,000 in the quarter, making almost equal in size to the US. Although US unit sales fell because Mazda cut back on incentives, it saw its operating profit rise substantially to 10.6 billion yen – a more than five-fold increase. Meanwhile in Europe, operating profit also fell, by 54%, to 1.2 billion yen; European sales fell by 3.4% to just 57,000 units, making the brand a very minor player in European terms. In financial terms, turnover has grown consistency in the last few years, from just over 2,000 billion yen in 2011/12 to over 3.400 billion yen in 2015/16; there may be some decline this year owing to foreign exchange losses and challenging conditions in Europe and North America.

In the light of the financial crisis in the late 2000s, Mazda undertook a detailed review of its strategy for the years ahead; it expected declining vehicle demand and the continued appreciation of the yen. The first version of the plan was announced in February 2012, since when Mazda has focused on the four core objectives of this plan, namely: 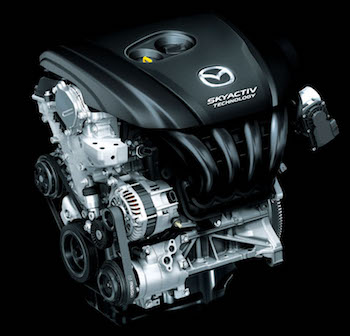 The SKYACTIV engine, above, is key part of Mazda’s business objectives

• Business innovation through the application of SKYACTIV engine technology which is now used on almost all Mazda vehicles made worldwide• Continued cost improvement through monotsukuri, focusing on efficiency and optimal parts sourcing• Strengthening its emerging market business and establishing a global production footprint. For example, a wider range of models are now made in Mexico, including production of a compact car there for Toyota; in addition, Mazda has expanded its plant in Thailand; and increased production outside Japan to around 40% of its total output• Promoting global alliances, eg. with Toyota in Mexico and with Fiat in Japan.

Mazda has now moved on to ‘Structural Reform Stage 2’ covering its current medium-term business plan period, from April 2016 to March 2019. It encompasses Mazda’s ‘Bundled Product Planning’ and ‘Common Architecture Concept’ approaches; these are designed to give the company enhanced flexibility in terms of plants and models, according to Masatoshi Maruyama, Mazda’s managing executive office in charge of global production.

The Bundled Product Planning approach looks at trends over the next five to ten years, identifying what key products or types of vehicles and specific technologies are needed; and then creates what Mazda calls a comprehensive plan for all vehicles to be sold during that time horizon.

The aim is to maximise each car line’s appeal and differentiation using common vehicle structures and manufacturing processes as far as possible. This is, in turn, made possible by the adoption of Mazda’s Common Architecture Concept; here the core characteristics of each major component are designed to be common across all car lines, irrespective of the vehicle’s market segment or engine size.