Jaguar Land Rover has embarked on an ambitious project, buying up examples of its classic models that are in need of restoration and effectively remanufacturing them 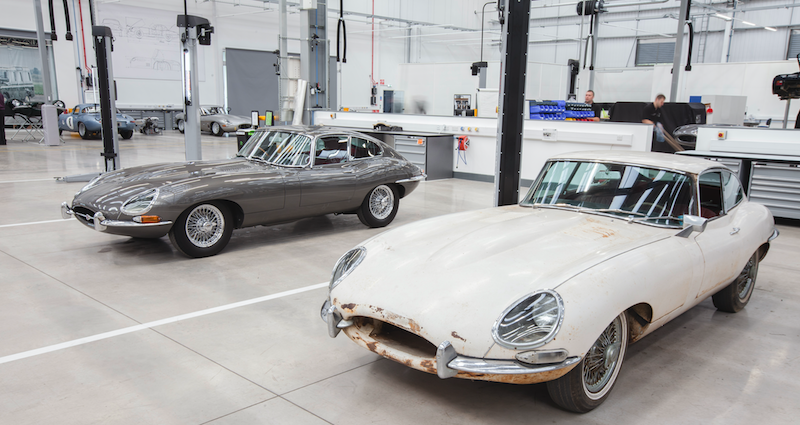 If you see an old Jaguar or Land Rover vehicle rusting and abandoned, then JLR wants to know about it. That is because taking old vehicles of that sort, completely remanufacturing them and then selling them again, is a key element in a segment of the company’s business that has just seen an investment of £7m ($9m) in a major new UK facility that was formally opened in June. This is the new headquarters and production area for the Jaguar Land Rover Classic brand that was launched in March last year. The 1,300 sq.m Jaguar Land Rover Classic Works facility is located in Ryton-on-Dunsmore on the south eastern fringes of Coventry, co-located with the company’s Special Vehicles Operations Centre.

The Classic business is about not just servicing but also completely remanufacturing, if necessary, JLR vehicles that fall under its remit – in practice any of a vehicle range that has been out of production for at least ten years. According to JLR Classic director Tim Hannig, that amounts to around 1.5m vehicles worldwide – a figure that he admits far exceeds the capacity of the new facility.

Nevertheless, he does say that the new facility, which replaces as many as ten older, smaller locations scattered around the UK’s West Midlands, represents a “significant” commitment by JLR to the business involved. He also adds that “not a single employee” from those older locations has been lost in the transition with the operation’s existing skills base entirely maintained. In fact, over the 12 months to the middle of this year, Hannig reports, the total number of employees within the business doubled from 40 to 80 and is set to increase by the same amount again to 120 by the end of the year.

An affinity for aluminiumAt the formal opening of the facility, Hannig also made the point that the two formerly separate marques of Jaguar and Land Rover actually share some common heritage dating from well before they became part of the same organisation. He noted that two of the most iconic vehicles involved – the original Land Rover from the then Rover company and the Jaguar XK120 – were both responses to the relative shortage of steel and glut of aluminium that confronted the UK automotive industry in the second half of the 1940s in the immediate aftermath of the Second World War.

Both resolved the situation in the same way; through a design that wrapped aluminium bodywork around a steel chassis and bulkhead. The new facility, Hannig adds, is appropriately the “very first one” in which manufacturing for both Jaguar and Land Rover vehicles have been brought together on the same site.

The individual with immediate responsibility for the remanufacturing and other operations in the 54 work bays at the Classic Works is general manager for engineering and operations, Sukhi Clark. She says that bringing all the activities involved under one roof generates a number of benefits. One is that it obviates the “hugely inefficient” way things happened previously, particularly as it affected information sharing among the people involved. “We weren’t learning from each other,” she explains. “We had three or four people in one place and half-a-dozen in other places and we were finding that the learning we got from particular programmes was lost.”

But Clark also identifies as significant the ability provided by the capacious new premises to co-locate the remanufacturing activities with the historic vehicles collection.

The point, she says, is that the collection constitutes “a huge reference library and archive” that can be used as a guide to support work on vehicles that may be several decades old. As she further explains, when vehicles are brought in for remanufacturing – a process for which JLR uses the term ‘Reborn’ – the first step is to disassemble them completely right down to nut and bolt level. But in that process parts may be damaged or found to be in need of replacement which have long been out of stock. In that case, especially if old paper drawings are not available, corresponding parts from vehicles in the collection can be used as reference models for reverse engineering procedures to produce appropriately ‘new’ old parts.

Those procedures, Clark further elaborates, are likely to start with the scanning of the parts to generate 3D digital models that can be used to drive subsequent manufacturing operations. She adds that the most likely manufacturing technique for parts required only in small volume would be machining from solid by a specialist external supplier. Attempts to use additive techniques using both nylon and metal materials, she remarks, have generally “not worked for us” though she indicates that they may well play a greater role in the future.

Though any relevant vehicle would be a candidate for complete remanufacturing, three types in particular are being targeted to be – again in JLR’s own nomenclature - Legends Reborn. These are: Land Rover Series 1 vehicles built between 1948-58, Range Rover Classics built between 1971-77, and E-Type Series 1 built between 1961-67.

Clark explains that in each case there is a rationale. The E-Type Series 1, for instance, is quite simply the “most sought after,” in part because, as she concedes, its “clean” appearance was slightly compromised by some stylistic changes in the succeeding 2 and 3 Series. A useful consequence of the vehicle’s near-cult status, she adds, is that they have generally been fairly well maintained and when found by JLR are usually in relatively good condition.

Standing next to a scruffy-looking but otherwise reasonably intact E-Type out on the Classic Works’ floor, for instance, Clark notes that the vehicle was sourced from the US state of Arkansas. Next to it is another E-Type that she says is the first of them to go through the official Reborn programme. It was sourced in Texas and when it came to Jaguar was actually a left-hand drive model. But given that the customer for the completed vehicle is based in the UK, conversion to right-hand was part of the programme. Surprisingly, she explains, that task is not too difficult - “you change it through the steering box and then alter the dash panel and wheel,” she says.

Meanwhile, for the Land Rover Series 1, Clark notes that a synergy between the time they were built and the present day JLR is that the latter “retains the familiarity with aluminium” that led to them being born in the first place. But, in addition, she notes, “they just have a lot of charm.” Pointing out some of the initial batch being processed at the Classic Works, she says that a couple of the very earliest ones from nearly 70 years ago were “only five chassis numbers away from each other” on the original production line. A significant proportion of the vehicles, she adds, have been sourced from Australia where the hot, dry weather has helped preserve them.

For the Range Rover programme, Clark indicates that the first batch of vehicles was being stripped down in June ready for the start of ‘rebirth’ towards the end of the summer. One of them, nicknamed ‘Swampy’ by the team, was “sat under a tree for 25 years” in damp UK conditions, not too far away from where it is now about to be given its new lease of life.

As a testament to the quality of its original build, Clark confirms that with the aid of some new engine oil and a properly charged battery it nevertheless started when the key was turned in the ignition. Furthermore, the interior was in such good condition that it can act as a reference for the authentic restoration of others in the range. She adds that, in this case, there is also a neat connection between past and present. The first 25 of those Range Rovers to be built had the name Velar – a title revived by JLR for a recent new addition to the Range Rover line that sits between the Evoque and Sports models. 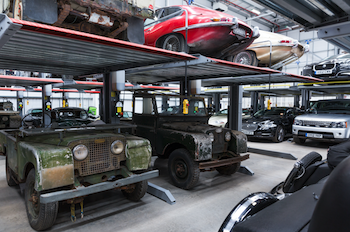 A serious businessAt present, Clark indicates that over 30 vehicles across the three ranges have been acquired by JLR for the programme. The fact that the Classic Works operation is a serious business is emphasised by the serious money that will be involved in actually purchasing Reborn vehicles. Starting prices for the Land Rovers will be £65,000, for the Range Rovers £140,000 and for the much sought-after E-Types £245,000.

Past and present also meet in other aspects of the Classic Works’ operations. It is where, for instance, it is now completing a batch of nine XKSS sports cars to finish off a programme of road cars derived from the original D-Type that otherwise took place back in the 1950s. The project is similar to JLR’s recent completion of six of the ‘lightweight’ variants of the E-Type to join the 12 that were originally produced ‘in period’.

Past and present are also, says Clark, literally embodied in at least some of the people who work at the new facility. A few of them, she points out, were already employed by Jaguar when the E-Type first started production. She herself started work with Jaguar as an electrical engineer in the late 1980s and laughingly concedes that some of the vehicles brought in for servicing have been built during her time with the company.

Right now, though, one of Clark’s preoccupations is seeing to the recruitment of the extra employees that Tim Hannig mentions. Some of them, she concedes, may be older people with appropriate experience, but she is adamant that a lot of them should also be younger people able to learn the skills that will keep the business moving forward. In short the business is about past, present and future.