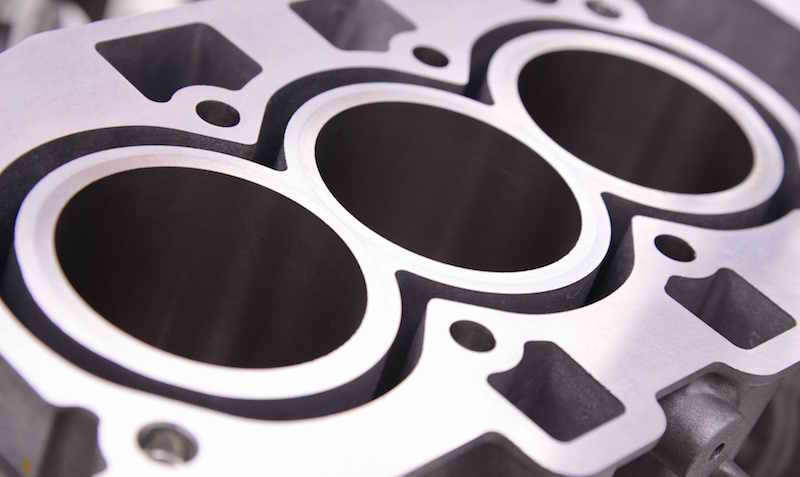 Engines, whether diesel or petrol, have a supply chain that is quite distinct from that which provides components to vehicle assembly plants. In essence, this is because engines are typically not made at vehicle plants and are also supplied to a variety of vehicles across several locations, both inside and outside the vehicle companies themselves.

Carmakers produce most of their engines themselves, although some notable cross-supply arrangements exist; for example, Renault supplies 1.5-litre engines to Mercedes (as part of the Renault-Nissan-Daimler alliance), while Ford still makes V8 engines for Jaguar Land Rover. BMW also supplies 1.6-litre and 2.0-litre diesels to Toyota in the UK.

Hams Hall, BMW’s UK factory, is the principal engine supply site for the Mini range and the BMW 1-series and 2-series models

The vehicle companies also cast most of the engine blocks and heads themselves, although there are some external suppliers – Nemak, for instance, which has a global manufacturing footprint. Crankshafts, con-rods and camshafts are also generally cast and machined in-house by the vehicle companies, as well as coming from independent suppliers.

Here we look at the in-house supply arrangements for engines and the major castings for a selection of vehicle companies, as well as the role played by external suppliers.

BMWThe German premium marque sources all its engines in-house, from four European sites – in Austria, the UK and two in Germany – and one in China. One of the German sites, at Landshut near Munich, makes most of the aluminium block and head castings for the engine machining and assembly sites at Steyr in Austria, Munich in Germany and Hams Hall, near Birmingham in the UK. The Landshut site also makes crankcases and transmission cases, while the Steyr facility manufactures crankcases, crankshafts and con-rods, as well as machining cylinder heads and assembling around 1.2m engines per year, around two-thirds of which are diesel and the rest petrol units.

The Munich plant is BMW’s main petrol engine factory, as well as producing large six-cylinder diesel units. Meanwhile, the UK plant is the principal engine supply site for the Mini range and the BMW 1-series/2-series models. Some engines from this plant are shipped to BMW in China, as well as to various BMW CKD vehicle plants in Asia. The engine plant in China sources blocks and heads from BMW in Europe, but the Chinese-built engines use locally-sourced crankcases, crankshafts and con-rods.

Daimler-MercedesTraditionally, Mercedes engines have all been made in Germany, at factories in Berlin (large diesel and petrol units), Kolleda (engines for the ‘smart’ range and the A- and B-class models and derivatives made on the MFA platform), and Untertürkheim which, together with a satellite site at Bad Canstatt, produces 650,000-700,000 engines per year. The Untertürkheim site is also the principal foundry operation for Mercedes, making the majority of its needs for blocks and heads.

To cope with rising demand, Mercedes is currently building its first European engine plant outside Germany, at Jawor in Poland. This will be an engine machining and assembly operation, using castings from Mercedes’ own factories and external suppliers. Also, like BMW, Mercedes produces engines in China to support its rising vehicle production there and to comply with local content rules and reduce import duties. 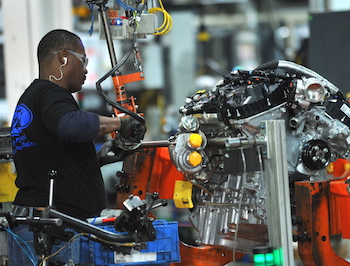 In Europe, Ford makes petrol engines in Germany (Cologne), Romania (Craiova), Spain (Valencia), Turkey (Kocaeli) and the UK (Bridgend); it has concentrated diesel engine production in the UK (Dagenham). Ford uses a mix of in-house and externally sourced blocks and heads, which are machined and assembled at these locations. The UK factories are machining and assembly operations only, ie. without their own casting operations. Its North American engine plants are in Ohio (two plants), Michigan (two plants), Canada (two plants) and Chihuahua in Mexico.

Outside North America and Europe, Ford has two engine plants in China, two more in India, two in Brazil and one in South Africa. All of these mainly supply their local vehicle production facilities, with some component exports. The South African plant has capacity for 110,000 complete engines and 220,000 engine kits for export and assembly elsewhere, notably to India.

A notable historical fact about the Ford South Africa plant is that it was one of the first to play an intercontinental role in engine component production. Back in the 1960s it undertook margining operations for UK-built engines, with castings and forgings shipped from the UK to South Africa for machining, before coming back to the UK for fitment into UK engines. 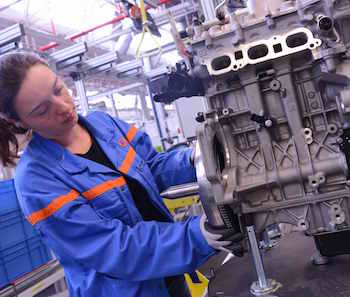 PSAPSA has two significant engine plants in France, at Douvrin and Tremery, which supply all the engines for PSA in Europe. It also has engine plants in Argentina and Brazil that supply PSA vehicles made in South America. PSA’s growing operations in China have the bulk of their engines made at Xiangyang.

In effect, PSA’s engine supply arrangements are regionally-focused, with little international supply. The European and South American plants are heavily vertically-integrated operations, making their own principal castings – blocks, heads, crankshafts and con-rods – as well as machining these parts and assembling them into complete engines, together with externally-sourced components.

Renault-NissanRenault and Nissan each have their own engine facilities, but also operate together, with an increasing degree of cross-supply of engines and other components as a result of their wide ranging alliances. This is currently most apparent in Europe but is gradually expanding to Renault and Nissan operations around the globe.

In Japan, Nissan has five engine plants, as well as two in China, and one in each of Brazil, Mexico, the US and the UK. These are highly vertically-integrated operations, casting blocks, heads and crankshafts and some other parts, machining them and assembling complete engines. The US plant at Decherd, Tennessee is notable because it also makes Mercedes 2.0-litre petrol engines under licence for supply to a Nissan US plant that makes Infiniti models and also to the Mercedes factory in Alabama for use in C-class models assembled there.

The UK plant is a similarly highly vertically-integrated operation, carrying out casting, machining and assembly of engines; these are not just used on UK-built Nissan models, but are also sent to Nissan’s plant in Spain and to various Renault vehicle assembly plants in France and Spain.

Renault itself has four engine plants in Europe – in France, Spain, Romania and Turkey – as well as at Curitiba in Brazil, and in Korea where Renault engines are made for use in Samsung models. The Romanian plant mainly supplies engines for Dacia models made in Romania, Morocco and various other Dacia assembly plants worldwide. The Cleon engine plant in northern France also supplies engines for Samsung, Dacia and Infiniti. Although Cleon makes some of the castings for these engines, it also receives heads, blocks, flywheel, con-rods, crankshafts and crankcases from Renault’s engine plant at Valladolid in Spain. 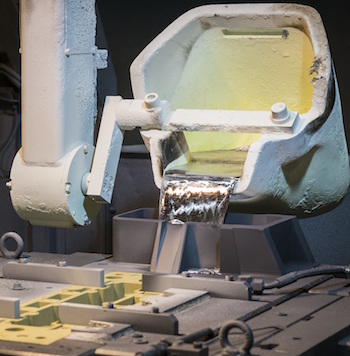 A major firm in aluminium block and head castings, Nemak supplies JLR from a foundry in the Czech Republic

External component supplyA complex supply chain supports the world’s engine plants. Nemak is one of the major independent large engine castings suppliers. Its core engine parts are aluminium block and head castings; one of Nemak’s key supply contracts is for the new Jaguar Land Rover engine plant at Wolverhampton, UK, which it supplies from a foundry in the Czech Republic. In this case, it supplies raw castings, with JLR carrying out the machining, but for some contracts, especially in the US, Nemak both casts and machines blocks and heads.

The company believes it will experience a significant increase in machining work in the years ahead and recently told investors that, in 2015, 60% of its output of block and head castings was machined by third parties (at its customers’ sites) but that by 2020, this would fall to 30%. In other words, Nemak expects the amount of machining it carries out on its own castings to rise by 75% due to a combination of organic and acquisition growth. For example, Nemak bought Ford’s Canadian foundries in 2001, Rautenbach in 2005, Teksid Aluminium and Hydro Aluminium in 2007, JL French in 2012 and Cevher of Turkey in 2016.

Other major providers include turbocharger suppliers, such as BorgWarner, Honeywell and others (see Boosting production, AMS September-October 2016 issue).

BorgWarner is also a major supplier of other engine components such as timing chains, cam-timing phasers and other high-precision machined parts including variable valve timing (to Jaguar Land Rover) and exhaust gas recirculation technology (to Hyundai and others).

Mahle also supplies a variety of other engine parts, including pistons, piston rings and pins, con-rods, cylinder liners, bearings and bushings. It also delivers complete valve-train systems and provides machining capacity for cylinder heads and blocks. Mahle is also at the forefront of a range of innovative engine technologies, including Evotec pistons, which reduce friction and increase fuel efficiency; valves that have been produced by electro-chemical machining facilitating liquid sodium cooling; and active fuel filters that remove water and other contaminants from fuel. The company has a joint venture with Bosch, in turbochargers, which it is looking to sell.

Mahle is also notable for a development in motorsport which has significant potential in mainstream volume vehicle production. In Formula 1, its engineers have applied a new technology, Turbulent Jet Injection (TJI), which is similar to the HCCI (homogenous charge compression injection) system developed for diesel engines. Ferrari first used TJI from Mahle in 2015; this system produces exhaust that is claimed to be cleaner than exhaust from contemporary road cars. TJI is also claimed to improved boost the engine’s thermal efficiency by more than 40%. F1 teams Renault and Red Bull used a similar system in 2016, Mercedes had an earlier iteration in 2014. Application on road cars is likely but a few years away for volume vehicles; use on low volume high-performance models is likely within five to six years. 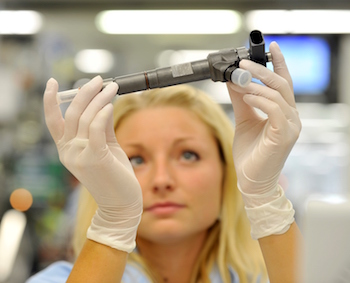 Injection systemsFuel injection systems, supplied externally to the vehicle companies, form a core technology product for some of the major tier one suppliers. The leading supplier of fuel injectors is Bosch, which actually has close to half of the global market for this technology, in both diesel and petrol engines. Other players are Continental, Denso, Delphi, UAES (a Chinese company), Kefico (the key supplier in Korea and globally for Hyundai-Kia), Keihin and Hitachi.

In Europe, Bosch currently has a market share of over 60% but is under pressure from Continental’s rapid growth in this market. Bosch still leads in North America but only with a share measuring 40% or so; by contrast here, Denso, which has a global production network in China, Hungary, Japan and Thailand, has a strong share of over 20%; meanwhile Continental is much smaller, ranked fifth, with a share of around 6-7%. In Japan, Denso is the leader, unsurprisingly, with over 50% share; Hitachi, regional specialists Aisan and Mitsubishi Electric follow. In China, UAES (a joint venture between Bosch and Zhong-Lian) is the market leader with over 25% of the market, followed by Continental, Delphi, Bosch, Kefico and Denso.