Robots on the rise 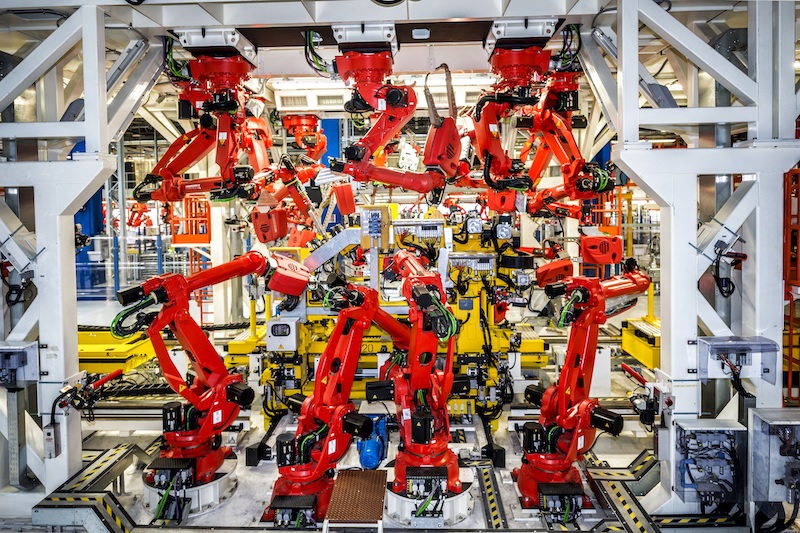 The automotive industry is at a crossroads. Ahead lays the most radical shake-up in a generation, with disruptive trends such as electrification, autonomous driving and lightweight materials bringing opportunity and uncertainty in equal measure. It comes at a time when the demand for robots in the automotive industry is projected to more than treble, with improvements to robot technology and new working practices driving their own revolution in manufacturing.

This period of change is placing the emphasis on flexible manufacturing, as Hui Zhang, head of product management at ABB, explained: “Most automotive companies are allowing for a transition from combustion engines to electric vehicles, going from a small volume of EVs today to perhaps 80% by 2030. Production facilities are going to have to be a lot more flexible in order to mix these different platforms year-on-year.”

Johann Haertl, head of Kuka’s competence centre for the automotive industry, pointed out that a volatile market makes it even more important to be able to handle small batch sizes profitably. “Increasingly, the challenge is to produce an even greater number of variants,” he stated. “Also, models of a product need to be available in variable quantities. One reason is the increased degree of customisation in the automotive industry. The goal is, therefore, to enable a production that is versatile on an industrial scale, which is networked throughout the entire process chain and which focuses less on individual components and more on the overall system.”

Of course, it’s not just the philosophy that looks set to change. Motors and batteries bring new materials, different processes and revised payloads. Meanwhile, the control systems required for electric and autonomous vehicles mean the ability to handle electronics is becoming increasingly important. And main body structures are likely to make greater use of lightweight, high strength materials.

The trend shifts towards smaller robots

These trends are already having an impact on robots. Bodyshops, for instance, have traditionally relied on spot welding, but the growing use of composites has seen adhesives play a greater role.

“For welding, the robot needs to carry a 100kg welding gun and move quickly over short distances. You might have six or more robots working on the body in a very confined space,” commented Zhang. “But if the primary joining technology becomes gluing then the requirements change. Now you need to smoothly follow a pre-defined glue path to apply the adhesive.”

Large robots, designed to handle the complete body, have tended to account for the majority of the market so far. However, most suppliers agree that it’s the small- and medium-size applications that we will see the biggest increase in automation. Pick-and-place operations could be one of the largest growth areas (for instance, putting together the parts kit that will then follow the car down the line). These light-duty applications will involve small parts, potentially down to nuts and bolts, which will require small, dextrous robots. More to the point, though, they will require the robots to work in close proximity to human beings.

Rise of the cobots

Cobots are perhaps the most significant trend in modern robotics. Currently, they account for around 3% of the global market, but a recent study by Loup Ventures and the International Federation of Robots (IFR) predicts this figure will spiral to 34% by 2025: “In the next five to ten years, we expect a lot of robot development will focus on human-robot-collaboration,” Haertl suggested.

Mark Gray from cobot specialist Universal Robots concurred: “There are still a lot of processes that haven’t been automated because the cost, the safety implications or the expertise weren’t there with traditional methods. That’s changing with this new breed of machines.”

The key thing, as ever, is safety. Most cobots are not designed to directly interact with human beings, but rather to operate safely in the same environment. They rely heavily on sensor technology to detect potential collisions and they are subject to ISO-certified limits on force, velocity and payload. Cobots tend to operate at the smaller end of the spectrum. Universal Robots’ current portfolio, for instance, ranges from 3kg to 10kg – enough for a sealant gun or a bolt runner, but still comparatively light-duty.

Heavier cobots are in the minority, but they do exist. Comau, for instance, now has a collaborative robot with a 170kg payload. It features a sensory textile skin, along with a host of other safety features that allow it to share its workspace with humans. This includes dual-mode operation, where the robot will slow down if it detects people nearby and speed up once its surroundings are clear. The expectation is that cobots will be deployed in final assembly roles, where human input is still required, but there are elements that would benefit from automation.

“You might have a situation where someone used to load a series of parts and then secure them manually with a driver or a bolt runner,” explained Gray. “In this instance, the human being might still locate the parts and the robot would then swing in and tighten up the fixings while that person is moving on to the next task. It’s about maximising efficiency.”

Getting with the program

Many cobots come with a hand-guiding function, which allows the machine to learn positions and movements demonstrated by a human operator. This is part of an industry-wide move towards simpler, more accessible programing techniques, Gray continued: “In the past, robots have required a lot of specialist knowledge to program. We’re putting that process into the hands of the line technicians, with a plug-and-play type solution that can be set up in around 25 minutes.”

Recently Volkswagen has gone a step further, working with Dresden-based start-up Wandelbots to develop a sensor jacket that can capture movement. Equipped with actuators for haptic feedback, the jacket allows the robots to be taught the movements required for a particular task.

The factory of the future could diverge from the current production line philosophy. Predictions differ as to just how mobile these robots will be and how soon the industry may embrace this philosophy, but the basic concept appears to be widely accepted. Tobias Daniel, head of global sales and marketing at Comau Robotics says: “There will be a move away from fixed production lines behind fences to robots that can be flexibly applied around the factory.”

One idea is to break up the fixed line completely and replace it with robots mounted on autonomous guided vehicles (AGVs). This would allow each car’s route through the manufacturing process to be tailored to its unique build specification. As Zhang noted, “There are, potentially, advantages to moving away from that approach, but there are also challenges. Fixed conveyer lines are easier to control, with a takt time for the whole line. When you have a flexible flow there is the risk that it can be a little bit chaotic.”

Many believe the solution to managing production in this potentially hectic environment will be smart factories, capable of monitoring and controlling the workflow. These will depend on software as much as hardware, with multiple robots networked together to function as one.

“We’re seeing a very clear trend towards centralised control systems,” confirmed Daniel. “That allows the software to optimise the whole process from start to finish. For instance, if you have several robots working at the same time, what is the most efficient way for them to interact?”

Comau is one of the first robot manufacturers to get rid of its own onboard controllers entirely. Instead, the Italian company now is working with a number of ‘automation partners’ to overlay third-party control software. Everyone, though, seems to be thinking along these lines.

“In factories today we tend to have a lot of micro stoppages – lasting maybe 30 seconds to a minute. Over the course of a year these can add up to $5m to $10m in costs. By centralising the information you can analyse these stoppages and any other bottlenecks in the production flow,” observed Zhang. “If you have all the line conditions monitored – potentially remotely through the cloud – the system can make more intelligent decisions on how to handle those stoppages.”

Predictive maintenance is another major part of the smart factory concept, whether handled locally by the robot’s own controller or by a central computer. Primarily, this comes down to observing the warning signs that a tool or a part of the robot may be approaching failure. However, intelligent robots may also be able to optimise their own processes to delay that point.

“Robots no longer need feedback from a human operator to improve their processes,” Daniel added. “Once they’ve performed a task maybe 50 times, they can spot improvements and they can also communicate with other robots to work in an efficient, intelligent way. For example, the software can monitor each robot’s movements to see if there’s a different toolpath that would result in less energy consumption. Similarly, if the current operation places a lot of load on one or two motors, it can look for an alternative way to move that will balance the load more evenly.” 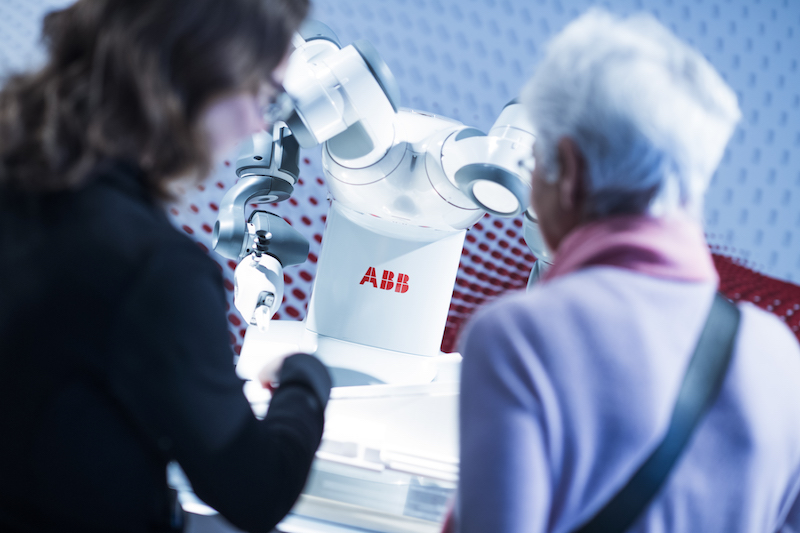 Many cobots come with a hand-guiding function, allowing the machine to learn positions and movements demonstrated by a human operator

While there is a strong consensus on where both the hardware and software of robotics is heading, the issue of personnel is less clear cut. Most of the robot manufacturers argue that the total number of people in the workforce will be maintained as we move towards greater automation. Gray, for instance, thinks that many robots are now specifically designed to work alongside humans: “People think that you’re going to take a person out of a role and replace them with a robot, but in fact you’re giving them a better tool. It’s a question of taking away the dull, repetitive work that opens up the risk of occupational health issues like repetitive strain injury or carpal tunnel syndrome. Instead, you can divert people onto higher value tasks within the same process.”

In theory these ‘higher value tasks’ tend to be more stimulating, less physically damaging and better paid. Win-win, in other words. However, not everyone is convinced. A recent study by Boston University economist Pascual Restrepo concluded that each new industrial robot typically eliminates six manual jobs (although he, too, has pointed out that this could be a question of redistributing labour rather than eliminating it).

In the end it will still come down to striking a balance, Zhang said: “There is a move towards more robots and fewer people, but we don’t anticipate that the robots will ever be smart enough or agile enough to completely replace humans in the factory. It will be a question of focusing people and robots on what they each do best. We already see very few people in bodyshops, for instance, but in final assembly – with lots of wiring harnesses and flexible materials – you need human input. That’s somewhere we see humans and robots continuing to work together.”