Like its competitors, GM is being lured by the idea of higher production in low-cost Mexico, to the consternation of US unions. The vehicle-maker will invest $5 billion in its four existing factories by 2018 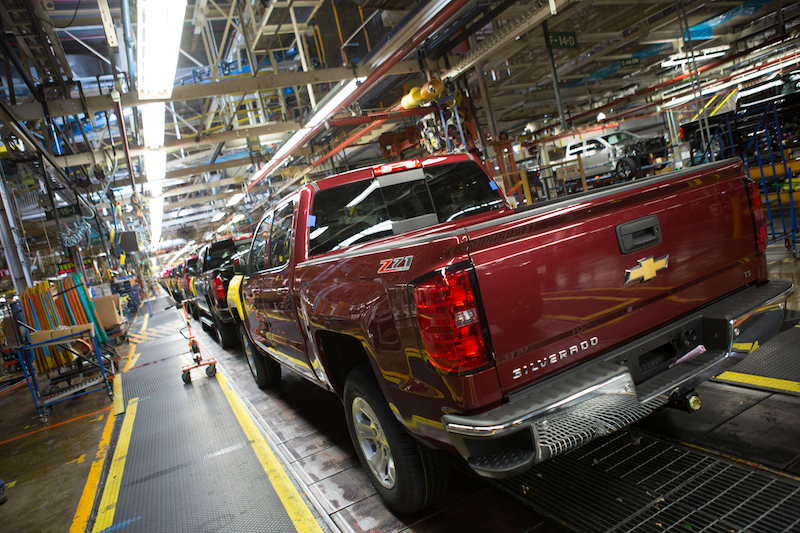 Like its main rival, Ford, and most other carmakers which are building vehicles in North America, GM’s production is swinging towards Mexico. In the first six months of this year, almost one-fifth of the cars GM made in North America were produced in Mexico and the OEM is in the process of pouring in more money to increase its presence there. In December 2014, the company said that it would invest a total of $5 billion between 2013 and 2018 to expand at its three vehicle plants in San Luis Potosí, Ramos Arizpe (Coahuila) and Silao (Guanajuato), and at its engine plant in Toluca. In total, the company built 323,335 cars in the first six months of 2016, down slightly on the year before.

GM might be eager to take advantage of cheap labour rates in Mexico, but it is a controversial issue. The gradual shift of production southwards has become a political flashpoint ahead of the US presidential election in November, with Republican candidate Donald Trump threatening to tear up the North American Free Trade Agreement (NAFTA) that has done so much to increase the appeal of Mexico to vehicle-makers. Meanwhile, workers at GM’s plant in Oshawa near Toronto, Canada, are concerned that the OEM is planning to close the factory and shift production to Mexico.

“In my opinion, GM has a strategic plan of beefing up Mexico at the [expense] of Canada and the United States. That is not going to happen,” said Jerry Dias, head of Canada’s largest private-sector union, speaking to The Oshawa Express in August. GM would not comment on its manufacturing strategy in North America, perhaps due to the heightened political sensitivity at present.

GM has been developing a manufacturing footprint in Mexico since 1935 and today operates four plants in the country, employing 15,000 people

GM has a long history in Mexico. It first opened a plant there in 1935, building trucks in the country’s capital using kits imported from the US. After Mexico demanded that makers increase their local parts content in the early 1960s, GM built three engine and vehicle plants over the next two decades. It also invested heavily in parts production and by 1998 its Delphi operation (now independent) was Mexico’s largest private employer, with around 72,000 workers. Today, GM employs about 15,000 people in the country. The expansion to 2018 will take that to just over 20,000, the company said in its 2014 investment announcement.

GM’s long-standing relationship with the country has helped to boost local demand for its cars. In the first seven months of this year, the carmaker’s sales in Mexico grew 16% to 159,733 to give the company a market share of just under one-fifth. However, the vast majority of the vehicles GM builds in Mexico are for export and the company has asserted that its $5 billion investment will help it to become the country’s top exporter of vehicles.

Exports are the key reason that any vehicle-maker sets up in Mexico, taking advantage of the low wages and the country’s wide range of global free-trade agreements. The US-based Centre for Automotive Studies has calculated that a US-sold car built in Mexico (using Ford’s D-segment Fusion for reference) costs a manufacturer $1,200 less than if the same car was built in the US, even taking into account costs of $900 to ship it north. GM first built a car for export to the US in 1981, when it shifted production of the car-based El Camino pick-up from Arlington, Texas, to its new factory in Ramos Arizpe, northern Mexico.

Following the trend toward small carsOne of the two plants on the Ramos Arizpe site currently builds the Chevrolet Cruze C-segment car, along with the B-segment Sonic. Production of the popular Cruze for the local and US market was announced last year, along with a $350m upgrade of the factory. Manufacture of the car started this year to supplement GM’s output in Lordstown, Ohio, and sits within the wider trend to move smaller cars to Mexico. “Labour represents a sizeable share of the production cost of these vehicles,” the Centre for Automotive Studies noted in a report published in July this year.

The second Ramos Arizpe plant has spent most of 2016 being retooled following a halt in Cadillac SRX production (its replacement is being built in the US) and the outgoing Chevrolet Captiva Sport. The factory is being prepared for manufacture of the B-segment Chevrolet Onix, which will not be sold in the US, and the D-segment Chevrolet Equinox SUV, according to the Centre for Automotive Studies. It is the Equinox that is produced by Oshawa in Canada, hence the local union’s fear that Mexico could take its staple vehicle and put the plant out of business. 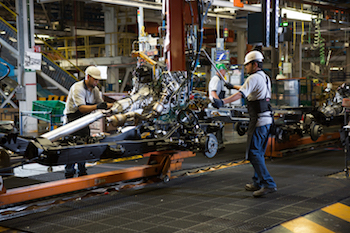 GM builds its bigger SUVs and pick-ups at Silao in central Mexico. Production at this site started in 1995 and, like Ramos Arizpe, it includes engine and transmission assembly. The $660m transmission plant has a daily capacity of 1,500 units and was opened in 2008, making six-speed gearboxes for use in both cars and light trucks worldwide.

The vehicles produced include the Chevrolet Silverado crew cab pick-up and there has been speculation that GM could move some production from Silao to Flint in Michigan, but in the first six months of the year vehicle production increased by around 10,000 compared with 2015 to reach 204,279.

To the north-east of Silao lies GM’s third vehicle plant, at San Luis Potosí in the state of the same name. The city made automotive headlines earlier this year when Ford announced that it would build a factory there, joining the BMW plant that will open in 2019. At this location, GM builds the Chevrolet Aveo B-segment (aka the Sonic) and the Chevrolet Trax B-segment SUV, but production dipped by 10% in the first half of the year to 78,571 units. The site also has a facility to build six-speed automatic transmissions.

GM’s fourth site in the country, at Toluca just west of Mexico City, builds engines. The OEM started production here in 1965 and last year it opened a new engine plant and aluminium smelter after spending $751m over three years to upgrade its facilities. The plant now builds GM’s new, 1.4-litre turbo gasoline engine, along with larger units including its 5.0-litre and 5.7-litre V8s. It also has a steel foundry onsite, present from the very beginning.

Purchasing parts in MexicoGM might not own Delphi any more but it continues to source a huge volume of parts from Mexico. In 2015, the OEM said that it had bought parts worth $15.1 billion in the country, up 8% on the year before and accounting for 19% of its total parts purchasing globally by value, putting Mexico second only behind the US. The company stated that it used 550 suppliers in Mexico – of which 480 were tier ones – for the acquisition of electrical components, harnesses, stamped parts and interior components. Of the parts sourced in Mexico, 40% were used locally while the rest were sent to GM facilities worldwide, with 700m pieces shipped out of the country last year.

In terms of the OEM’s other activities in Mexico, GM claims to be “aggressively” increasing its use of renewable energy at its four facilities, including collaborations with local wind-energy suppliers. The vehicle-maker had previously announced that wind would help to power three of its factories from Q1 2016, with the aim of using 125MW of such energy by 2020.

The recent push in Mexico, not only from GM but its US rivals, Ford and Fiat Chrysler Automobiles, will increase production there by around 850,000 vehicles annually from now until 2020, according to the Centre for Automotive Research. This will bring their Mexican production to around 2.5m per annum, up from around 1.6m at the moment. Whether political pressure will start to reverse those gains and bring some production back onto home soil remains to be seen.